Rosenqvist "confused" by penalty that cost him Berlin win 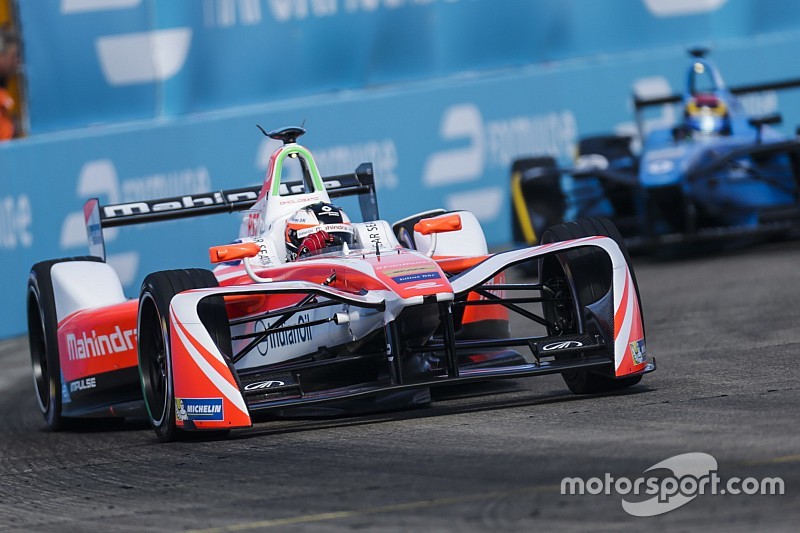 Felix Rosenqvist was left "confused" by the penalty that cost him victory in the second race of Formula E's Berlin double-header last Sunday.

The Mahindra driver claimed his first win in Saturday's race and won on the road on Sunday from pole position, but was relegated to second by a 10-second time penalty for an unsafe release.

That was awarded after Rosenqvist almost collided with teammate Nick Heidfeld during the mid-race car swaps, when Rosenqvist started to emerge from in his second car just as Heidfeld was swinging his car into the other side of the garage.

The front of Rosenqvist's car did not hit Heidfeld's rear, but the German had already opened up the steering to avoid a potential collision and missed his garage as a result.

There appeared to be a moment of indecision between Rosenqvist and his mechanic signalling him to leave the garage, but the Swede said he was in control of the situation.

"I knew it was on the limit with another car, Rosenqvist told Motorsport.com. "If you go out side-by-side you know it's going to be OK because you can blend in behind them.

"That's what I tried to do and I realised Nick was coming into the pits and was already in the slow lane.

"I braked for him to go past me and he just stopped. I feel like I was always behind and it was not really my fault. That's why I'm a bit confused why I got the penalty.

"It's a shame it has to be about penalties here and there and they want to end it like that."

Heidfeld was also punished for an unsafe release, having been put into Nelson Piquet Jr's path when he finally managed to get into the garage and change cars.

His punishment was only a €1500 fine for the team. Unsafe release penalties are not uniform as the FIA stewards issue sanctions based on each independent incident.

Rosenqvist withstood an attack from his pursuer Sebastien Buemi at the start of the second stint and the two leaders were far enough in front for Rosenqvist to remain ahead of Lucas di Grassi once his penalty was applied.

Buemi settled for running close behind Rosenqvist with the knowledge he would inherit the victory, but admitted after the race he was not sure he would have beaten him in a straight fight.

"I don't really care now how I win, especially after yesterday," said Buemi, who was disqualified from fifth on Saturday for illegal tyre pressures.

"I'm happy with that result however I'm not sure I would have managed to overtake him. If I'd had a normal day yesterday it would have been more even over the two days but he's done a better job so congratulations to him."