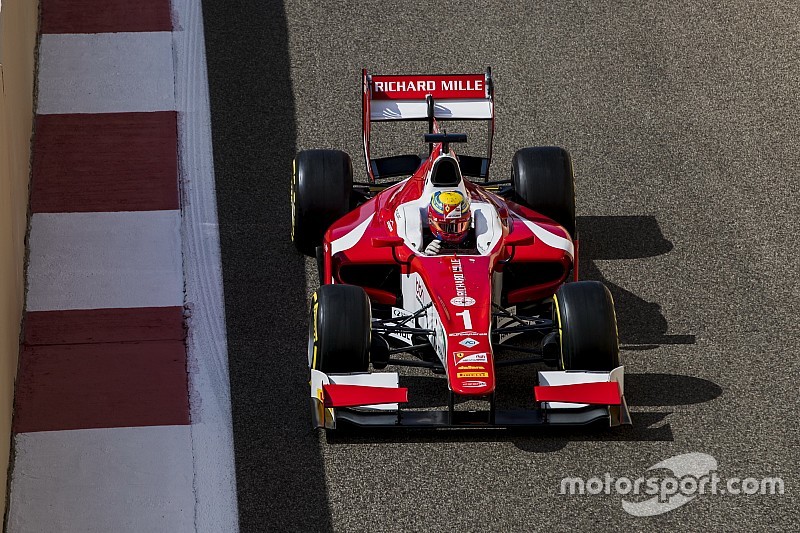 Formula 2 champion Charles Leclerc claimed a seventh win of 2017 in the final race of the year in Abu Dhabi, forcing his way past long-time leader Alexander Albon on the final lap.

From second on the grid, Albon took the lead as Jordan King slumped to sixth with a poor getaway from pole, with Nicholas Latifi and Nobuharu Matsushita settling into second and third.

Albon pulled out a lead of one second in the opening five laps, with the advantage hovering around the 1.4s mark until the closing stages as the order at the front remained static.

Behind, Leclerc was the man on the move, the Prema driver having moved from seventh to fifth on the opening lap.

After being briefly repassed by King, Leclerc pulled away from the Briton, and made short work of Nyck de Vries and Matsushita to move into the top three on lap 14 of 22.

Leclerc's progress was then hampered by yellow flags, which prevented him from using DRS and allowed Albon to hang on to the lead as the pair started the final lap nose-to-tail.

But Leclerc forced the issue at Turn 8, making light contact with Albon and compromising the Anglo-Thai driver's exit - before slipstreaming his way past on the marble-strewn left-hand extremity of the following straight.

That allowed Leclerc to grab the win by 1.293s, denying Albon what would have been a maiden F2 win.

Latifi hung on for third, 3.2s down at the finish, under a second ahead of Albon's ART teammate Matsushita.

De Vries slumped from fifth to ninth in the second half of the race, getting involved in an incident with Louis Deletraz was that was responsible for the late yellow flags.

The Dutchman's struggles promoted Luca Ghiotto to fifth, one place ahead of Russian Time teammate Artem Markelov, who held off a charging Oliver Rowland for sixth.

DAMS driver Rowland had started last after being disqualified from victory on Saturday, but was up to 13th on the opening lap and quickly made his way into the points before eventually getting held up behind Markelov.

King was a non-finisher after contact with Markelov in the early stages left him with a puncture.

McLaren junior Lando Norris was 13th in his second F2 start for Campos, after being handed a five-second time penalty for leaving the track and gaining an advantage.

Fifth and sixth places were enough for Russian Time to seal the teams' title ahead of Prema and DAMS.