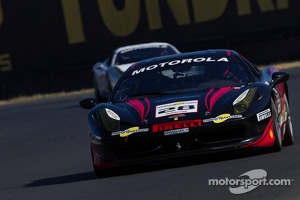 Jon Becker, representing Scuderia Corsa, the racing arm of Ferrari of Beverly Hills and Silicon Valley, left the Sonoma Ferrari Challenge six weeks ago with two trophies and a determination to leave Montreal with another. Becker, who drives in the Coppa Shell series of the Ferrari Challenge in his No.28 458 Italia, is currently in his third season of racing.

After stepping down from the podium, a smiling Becker said, “it’s the second race weekend in a row where we are on the podium and were fighting for the win and championship points. The technical direction of Roberto Amorosi, combined with the focused and dedicated effort of Scuderia Corsa, has made us a real threat for the championship. The weather changes, setup challenges, and difficult logistics proved no problem for the team in Montreal. Once again I am reminded why racing with a top tier professional GT team is the right decision for Ferrari Challenge." Becker then added, "I am grateful to my family for their support this season: they are making huge sacrifices to support me and it is always nice to be on the podium as a validation of their efforts."

Scuderia Corsa Team principal Giacomo Mattioli added, "Jon did a great job in managing difficult weather conditions and an evolving grip on the race track. He finished on a high note with a podium that keeps the chase for the Coppa Shell on."

Scuderia Corsa will continue its quest for the Copa Shell in the next Ferrari Challenge race at Lime Rock Park in Connecticut on July 19-20, 2013.