Charles Leclerc has labelled Max Verstappen’s accusation that Ferrari had been getting around Formula 1’s engine rules as a "joke".

By:
Jonathan Noble
Co-author:
Scott Mitchell
Listen to this article

Verstappen told Dutch TV channel Ziggo Sport after the United States Grand Prix that Ferrari’s lacklustre performance at Austin could be explained by a technical directive that effectively outlawed a clever way of increasing fuel flow.

Asked about what happened to Ferrari, Verstappen said: “That’s what happens when you stop cheating, of course. But yeah, they had a good look at it. So now we have to keep a close eye on it, of course.”

Later on, Verstappen repeated his claims and said he was not surprised that Ferrari had been off the pace in America after the FIA issued the technical directive.

“Not surprised, at all, about it,” he added. “After what came out. That explains everything.”

But Verstappen’s comments have been criticised by Leclerc and the Ferrari team, who think it is wrong that such accusations have been made because the team says it made no changes to the way it operated its engine.

Leclerc said: “I think it is a joke, to be completely honest. He has no clue. He is not in the team.

"We know exactly what we are doing. I don’t know why he is speaking. He doesn’t know anything about us.” 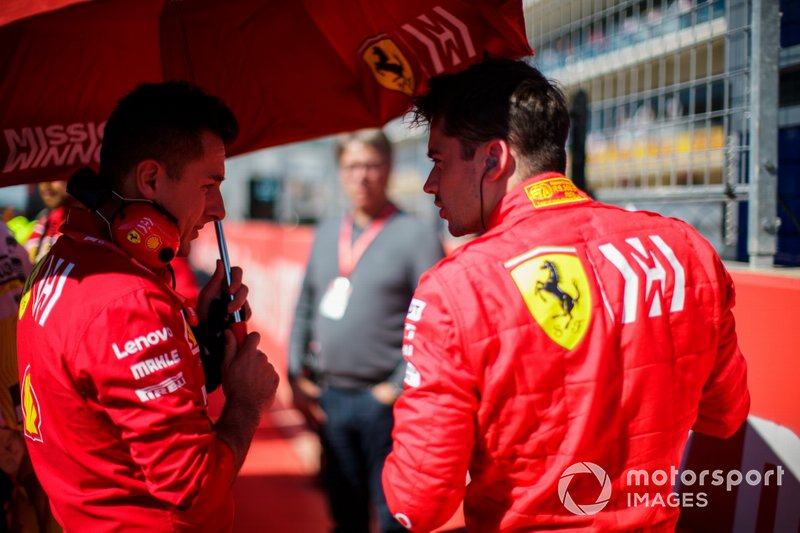 Charles Leclerc, Ferrari, on the grid

Before the Mexican Grand Prix, Red Bull had written to the FIA requesting clarification over fuel flow meter signal filtering, and been told that three scenarios it had outlined would not be legal.

The fuel flow in F1 cars is monitored by a single FIA sensor and the rules ban any device, system or procedure that is designed to increase the flow rate or to store and recycle fuel after the measurement point, or has the effect of doing that.

Red Bull’s query came amid speculation about Ferrari’s engine performance this season, with rivals trying to work out how it has been able to develop such an advantage, particularly in qualifying.

Ferrari team principal Mattia Binotto made clear his disappointment about the accusations made against his team, and that its poor performance in the USA race had nothing to do with engine power.

“I read and I heard a lot of comments this weekend about a technical directive and the impact on our cars,” he said. “I heard comments at the end of the race which I feel [are) very disappointing

“As a matter of fact I believe yesterday we were very close to pole position as it has been in the last race.

"I think Seb could have scored pole yesterday, but maybe was a bit too cautious in one corner. I think that Charles had a clear problem in the morning, losing completely FP3 and then had a downgrade on the engine we fitted on the car.

“Overall, looking at his performance in Q3 and what could have been done, without the issue in the morning, I am pretty sure that he was potentially on the pole as well. So I don’t see where is the problem.

“If I look at the race today, certainly the speed on the straight was not our issue whereas we had clear problems with the grip of the car on the first stint with both drivers.

“It is the type of comments that are completely wrong in the sport. It is not good for the sport and I think everybody should be a bit more cautious.”