Lewis Hamilton felt “proud” of Sebastian Vettel for standing up for LGBTQ+ rights in Hungary last weekend after the Aston Martin Formula 1 driver was reprimanded for breaking FIA protocol.

Hamilton and Vettel both spoke out against Hungary’s anti-LGBTQ+ legislation in the build-up to the race weekend at the Hungaroring, with Vettel wearing a pair of rainbow trainers in the paddock on Thursday.

On the grid ahead of the race, Vettel put on a rainbow-coloured t-shirt with the words “Same Love" written on the front, which he wore on the grid during the pre-race ceremonies.

But it resulted in a non-driving reprimand for Vettel, who kept the t-shirt on during the national anthem. This was deemed to be a failure to follow the race director’s instructions, with Carlos Sainz, Valtteri Bottas and Lance Stroll also receiving a reprimand after they kept on their We Race As One t-shirts.

Prior to the FIA’s ruling, Vettel said he would be “happy if they disqualify me" over wearing the t-shirt, adding: “They can do whatever they want to me, I don’t care. I would do it again."

Asked about Vettel’s t-shirt, Hamilton praised the four-time F1 world champion for speaking up and helping the push for greater inclusivity within the sport.

“I think it’s wonderful that Seb has taken a stance this weekend, really to speak out for those in the LGBTQ+ community here," Hamilton said. “I spoke about it the beginning of the weekend. I think it was important for him to do so. He probably won’t be in too much trouble.

“But we have to make a stand. We’re pushing for diversity and inclusivity, and that community, 100%, is included in that. I’m proud of him for it." 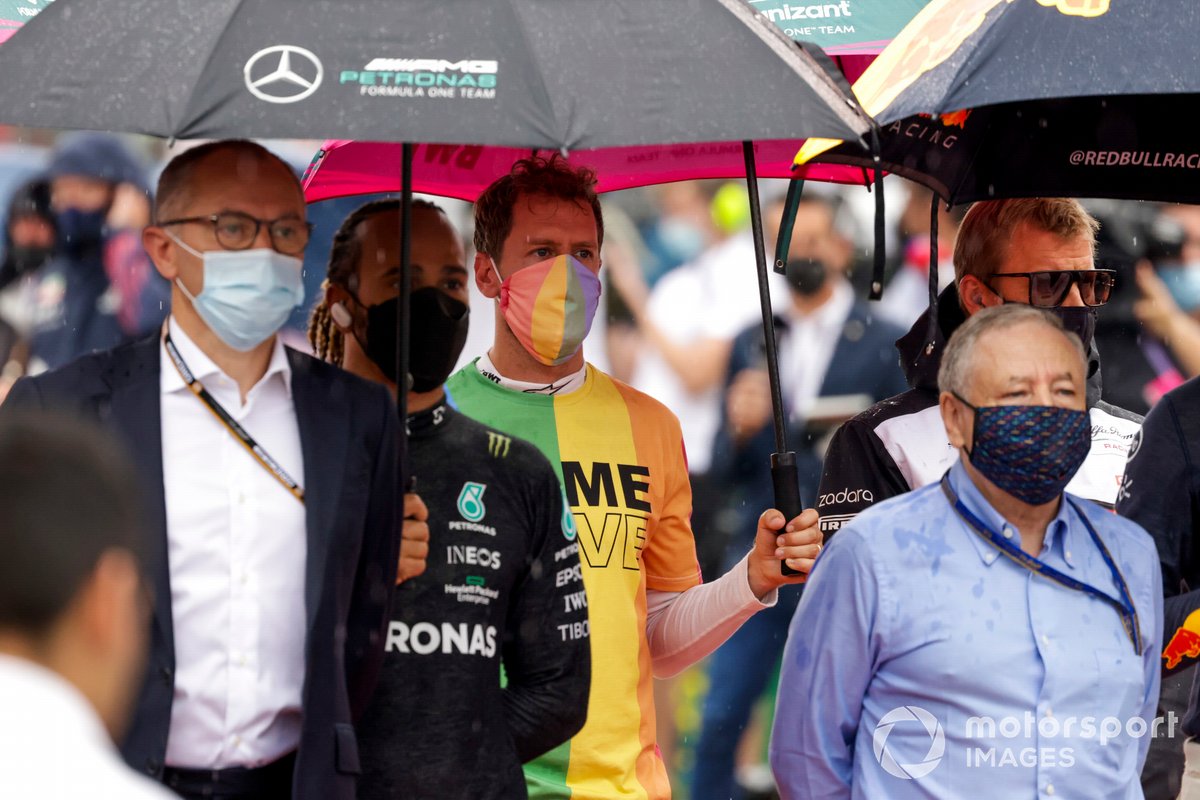 As well as wearing his shoes and the t-shirt, Vettel’s race helmet for the Hungarian Grand Prix weekend featured a prominent pride flag as part of the design.

Hungary implemented the law last month preventing the depiction and teaching of homosexuality or transgender issues to under 18s, sparking widespread condemnation across Europe.

The EU has already commenced legal action against Hungary, with a majority of its member state governments condemning the law as a “flagrant form of discrimination based on sexual orientation, gender identity and expression".

“It’s obviously not for us to make the law, and that’s not our role," Vettel said on Thursday. “But I think just to express the support for those who are affected by it [is]."