Lewis Hamilton says he feels "terrible" and "incredibly disappointed in myself" after hitting the wall twice during Formula 1 qualifying for the Russian Grand Prix on Saturday.

Hamilton topped both Q1 and Q2 for Mercedes in Sochi, and was the quickest driver on intermediates in Q3 before cars came in to switch to slick tyres.

As Hamilton came in to make the change, he clipped the wall at pit entry, leaving his Mercedes car with front wing damage and in need of a new one to be fitted.

While Hamilton was able to eventually get back out after moving aside for teammate Valtteri Bottas in the pits, he struggled to get his slick tyres up to temperature, spinning into the wall in the final sector on his last lap.

Despite the mistakes, Hamilton still qualified fourth with his initial time on intermediates, having seen Lando Norris, Carlos Sainz and George Russell all jump ahead on slicks.

Speaking to Sky Sports in the pen after qualifying, Hamilton admitted the incident at pit entry was "just a mistake from myself" and not down to his cold tyres.

"Ultimately I'm incredibly disappointed in myself," Hamilton said. "Up until then, I was in a groove, I was really in the zone. I'm really sorry for all the team that are here and back at the factory, because obviously that's not what you expect from a champion.

"It is what it is, and I'll do my best tomorrow to try and rectify it." 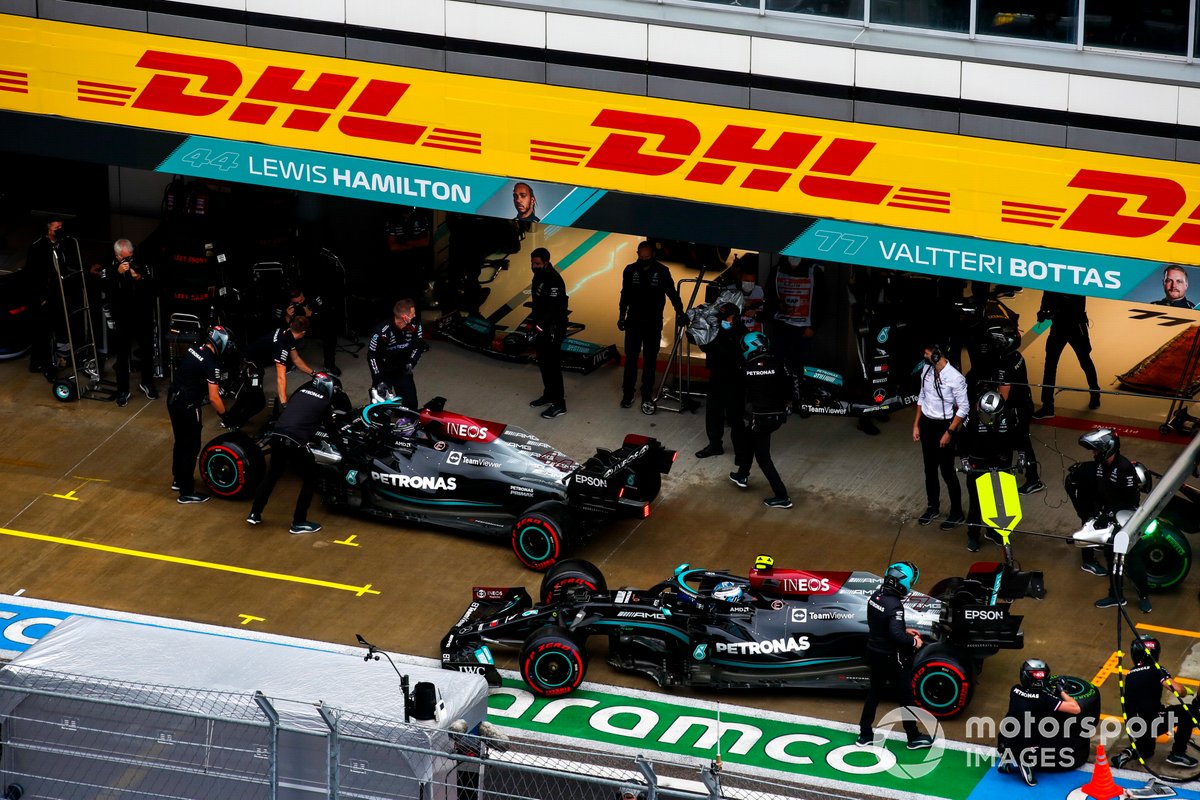 Hamilton added that the grip levels were "horrible" as he tried to get temperature into his slick tyres upon returning to the track, making the circuit feel "very slippery".

"I was losing temperature in the lap, and then twice in the wall, that's very rare for me," Hamilton said.

Mercedes will be able to replace any broken parts on Hamilton's car ahead of tomorrow's race without taking a penalty so long as they are the same specification.

Despite missing out on pole, the seven-time world champion will be looking to capitalise on the fact that title rival Max Verstappen will start last after a penalty for power unit changes.

"The guys up front have got good pace, and it definitely won't be easy," Hamilton said. "I'm just going to say my prayers and hope that the car can be fixed, and it's hopefully OK for tomorrow.

"These things are sent to try us, and I feel terrible right now. But I'll turn it into a positive, and try to do the best. But you've got a Brit on pole, which is great, so congrats to Lando."