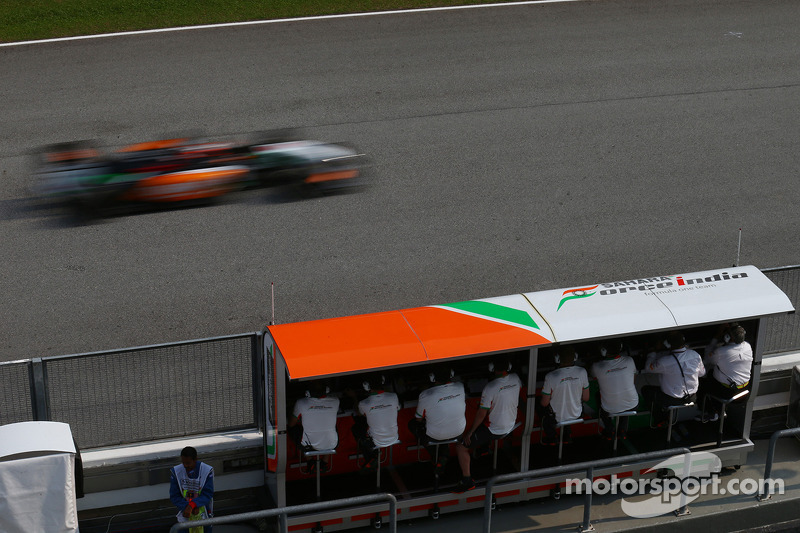 Force India is looking forward to the trip to Bahrain!

Vijay’s Vision Team Principal, Dr Vijay Mallya, reviews a convincing performance in Malaysia as we prepare for round three in Bahrain.

Looking back on the Malaysian race, what was your verdict on the team’s performance? “We always knew that we could be competitive and were capable of fighting with the traditional frontrunners, as Nico demonstrated once again. He's got that huge competitive spirit in him and he's obviously hugely talented. In the wet, in the dry, whatever the tyre compound, he's there. It was sad that we encountered some unexpected issues with Checo's car and that he had to sit out the race, otherwise judging from what Nico did, we could easily have expected a strong double points finish.”

Nico even briefly led in Malaysia before he pitted… “It's always nice to see a Sahara Force India in front! You can't just find yourself leading a Grand Prix by accident. Things have got to be in the right place at the right time, and you must be good enough to be able to be up there in front. We've still got some catching up to do if we want to be a regular podium contender. We've got our plans for that. We've had our best start to a season in our history, since the Jordan times, and despite only one car finishing in Malaysia we are sitting in fifth in the Championship. Let's hope we put on a strong show going forward.”

Everyone's tested in Bahrain, would you agree there will be no surprises? “I don't think there will be any surprises. In Malaysia rain is always the unknown factor and we had plenty of it during qualifying. We had a dry race and we wanted to see how we would cope with the heat, as that was an important element of the whole car design for this year. We were alright and all our temperatures were within our parameters, so that's good. In Bahrain it will be similar so we don't expect any unknowns there and hopefully we'll have a good race.”

Nico, a strong weekend in Malaysia - what did you learn from the race? “I think the performance in Malaysia was very encouraging, especially because we managed it with a two-stop strategy and nobody else near the front managed that. We've had two good races and have scored a lot of points already. I think we have a strong foundation and we can now build on that. The car is good, but there are still areas that we need to focus and work on so we have to keep the development rate high.”

Bahrain is up next, were you encouraged by the team’s performance there in testing? “Yes, but for the race we will drive at a very different time of day, when it gets cooler. I think it will be easier for the tyres and tyre management, which is good for us in the car. In terms of performance I expect something similar to Malaysia. I think the aim must be for us to qualify in the top ten again and score some more points.”

What memories do you have from racing in Bahrain? “To be honest Bahrain hasn't been the best place for me and I've never had a good result there. So we're going to change that this year! The track is not bad and I really like the paddock and enjoy the atmosphere. It's a very nice venue and it's good to work there.”

Sergio, after the disappointment of Malaysia you must be pleased to have the next race coming up so soon this weekend… “It's a very good thing that the disappointment will only last a couple of days before we go to Bahrain, so I'm looking forward to it. The whole weekend in Malaysia was frustrating, but hopefully we can achieve a great result in Bahrain.”

You looked competitive during the winter test session in Bahrain… “I feel that we are in good shape, so hopefully we can deliver a strong performance there. If we keep out of trouble, we should have the pace to score points and get our season back on track. ”

What is your favourite memory of Bahrain? “Last year I had a good race with McLaren and it was one of my best races. Also, I won there in GP2. Normally it's a good track for me, so I'm looking forward to it.”

Which parts of the lap stand out for you? “In turn one there's normally a lot of overtaking and a lot of action, and with the limited rear grip the cars have these days it will be interesting how we can cope with that.”