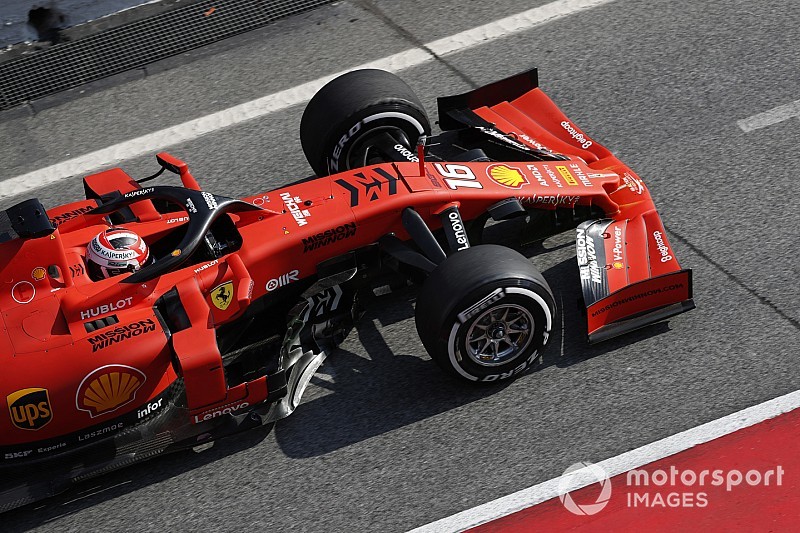 Ferrari came out of the blocks strongly on Day 1 of F1 pre-season testing with Sebastian Vettel setting the fastest time.

Ferrari came out of the blocks strongly on Day 1 of F1 pre-season testing with Sebastian Vettel setting the fastest time.

Vettel's quickest lap of 1m18.161s in the morning session was set on the middle compound of Pirelli's range for the tests. Carlos Sainz and Romain Grosjean were second and third fastest, some way off the pace of the Ferrari.

Ferrari's promising start also included 169 total lap tally, well ahead of the nearest rival on a good opening day for the Scuderia under the new management of Mattia Binotto.

For reference last year Ferrari set the fastest time on the final of winter testing with a 1m 17.2 on hypersoft Pirelli tyres.

Sainz brought out the first red flag of the afternoon when he stopped at the exit of the pitlane with an apparent lack of drive. But he was soon under way again.

Red Bull's new relationship with Honda got off to a promising start, a distant contrast to McLaren's with the Japanese manufacturer back in 2015. Verstappen ran 128 laps, setting the fourth-fastest time.

Mercedes again combined the driving duties between Hamilton and Bottas, as they did last winter, with the world champion taking the wheel in the afternoon.

What to look for in testing

People say that you can’t tell anything from testing, but that’s not true. You can learn a lot; from the body language of the team to the consistency of the lap times and the variants between low and high fuel runs.

For the next two weeks here are some things to look out for:

Is the new Renault enough of a step forward to challenge for podiums?

How do the Honda and Renault powered cars look through the speed traps compared to the Mercedes and Ferrari? Have Honda had to compromise much on performance to ensure reliability of that engine in the ultra tight body packaging?

What level will Williams be at when it gets going?

Has Alfa Romeo (formerly Sauber) taken another step? They were the most improved team in the second half of 2018, and with the technical might of Ferrari behind them, this car should be a solid top ten runner every week. At whose expense? And will McLaren be able to race at their level this season?