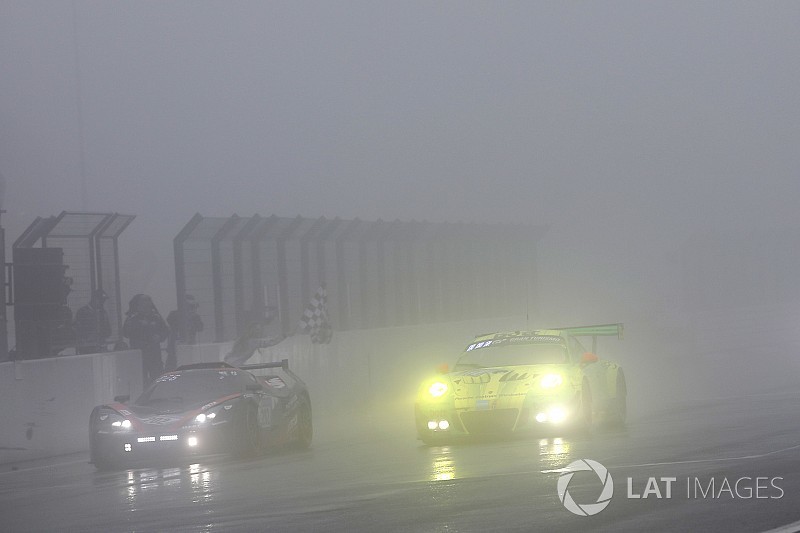 The two leading drivers in the finale of the Nurburgring 24 Hours admit they were surprised that the race resumed in such poor weather conditions.

Heavy fog developed on the Nordschleife in the early hours and caused the race to be suspended with three and a half hours remaining, but with 90 minutes remaining a restart was called.

It meant a five-minute lead for the #4 Black Falcon Mercedes AMG-GT3 of Adam Christodoulou over Frederic Makowiecki’s #912 Manthey Racing Porsche 911 GT3 R was negated, and Makowiecki made the decisive around the outside of Christodoulou at the start of the third lap of green flag racing.

Speaking to Motorsport.com, Christodoulou expressed his surprise that officials deemed it safe enough to race given the amount of standing water on track and the continued presence of fog.

“We weren’t even sure the race would restart,” Christodoulou said. “We did our warm-up lap, and the conditions were so bad, with so much standing water. I was watching the safety car aquaplane!

“I was a little surprised they gave it the green but they obviously believed it was safe enough and the fight was on, and at the restart there wasn’t much I could do [to hold off Makowiecki].”

The #912 Manthey car had lost out to the #4 Mercedes in the early hours of the morning when thunderstorms first hit the track, meaning Makowiecki was not expecting to overhaul Christodoulou.

Makowiecki added: “I was surprised when they put [out] the green flag. The safety car had his light [on] until the last chicane, he entered the pitlane and the team told me ‘green flag’. I was totally not prepared.

"When I could see it was not too hard to follow, I started to think we have a chance, because we saw during the race often the Mercedes was quicker than us in the rain. We were not so optimistic.

“But at the end we had a mega car. In the dry and the rain we were really competitive.”

One of Makowiecki’s teammates in the #912 Porsche, Richard Lietz, said the reason for Manthey’s upturn in wet-weather pace at the end is that it had not prepared its tyres correctly before.

Nurburgring rules allow individual teams to modify the tyres they receive from their supplier – Michelin in the case of the two lead runners – and while Black Falcon cut additional grooves in their tyres in the night, Manthey did not do so until later in the race.

“We had too little experience with the rain tyres, that was our main problem,” Lietz explained.