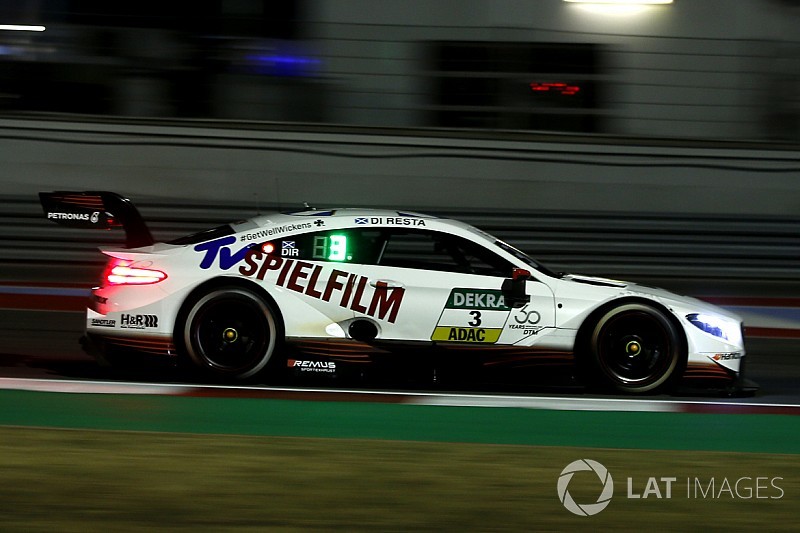 Mercedes driver Paul di Resta will start DTM's first night race from pole position as he topped Saturday qualifying at Misano by half a second.

The session was held under wet conditions, the top time constantly falling during the session with Rene Rast taking the early lead with a 1m50.579s - but the pole time eventually ended up over three seconds faster.

It was Rast who spent most of the time in the lead, and he was also first with six minutes on the clock when he went three tenths faster than Lucas Auer.

But he was then demoted by di Resta with a 1m47.382s and Rast's subsequent improvement fell 0.039s short.

Edoardo Mortara came even closer, only 0.002s behind the Scotsman as the chequered flag fell, only for di Resta to go half a second quicker and end up topping the session with a 1m46.854s.

Timo Glock was the top BMW driver in fifth while Auer brought a fourth Mercedes into the top six.

He beat Mike Rockenfeller (Audi) by 0.006s, as the top 10 was completed by Pascal Wehrlein (Mercedes), Augusto Farfus (BMW) and Daniel Juncadella (Mercedes).

BMW's top man in the standings Marco Wittmann was only 15th, while the manufacturer's wildcard Alex Zanardi rounded out the order in 19th.

He was 3.7s slower than di Resta but only nine tenths behind 18th-placed Philipp Eng, who started his session with an off-track excursion at Turn 5.