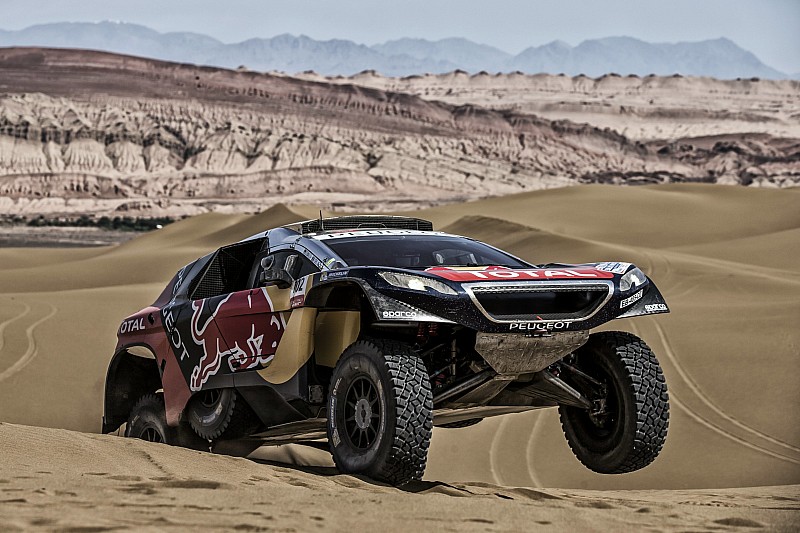 Dunhuang (China),  July 19, 2016 – Team Peugeot Total notched up its third one-two stage finish of the 2016 Silk Way Rally on Leg 10. The #100 and #102 Peugeot 2008 DKRs completed Tuesday’s fast, fiercely-contested competitive section at the very top of the timesheet, while the #104 car missed out on third place by just 30 seconds. The result sees Peugeot strengthen its provisional hold on the top two overall places.

Following their one-two-three performance on Monday, the three Peugeot 2008 DKRs started today’s leg at four-minute intervals. They soon regrouped in order to run in close formation for much of the 340km competitive section and aided each other through the portions which featured complex navigation.

True to form, Sébastien Loeb / Daniel Elena produced a consistent display again to earn another second-best effort and defend their second place in the provisional overall standings, 18 minutes clear of their closest threats.

Cyril Despres / David Castera finished just 30 seconds short of the podium but successfully matched the pace of Loeb / Elena who passed them soon after the start. The former-biker’s style in the Peugeot 2008 DKR is getting smoother all the time and he is feeling increasingly at ease in his new front-running role.

“It’s nice to have come first and second again. Our crews ran together and all three PEUGEOT 2008 DKRs went well on today’s high-speed stage. We’re a day closer to the finish but there are still four big, challenging stages ahead of us. We must continue to steer clear of mistakes and we certainly can’t afford to take our eyes off the ball.”

“We were fastest on the stage but, as is often the case on the Silk Way Rally, start orders had a big influence on the result. We soon closed on the cars ahead of us and, as they erred off the correct route, we found ourselves up at the front of the field. I think it was just a case of making fewer mistakes than the others. We will consequently be first on the road tomorrow and we know we will need to wait for Cyril and Sébastien because our role now is to provide them with assistance if they need it. It’s the first time I’ve had to do that but I am happy to play the team game to make sure there’s a Peugeot on top when we reach Beijing. It’s a little less stressful like this, so you can have more fun driving because you’re not trying to save every tiny second. All I have to play for is to help my colleagues.”

“Cyril and I stayed together, repeatedly passing each other while keeping up a fast pace. We know we lack experience but we’re in a good position. I am very happy with the way today went and we didn’t make many mistakes. Running at the front is doing us good because we are improving day after day. I haven’t decided on any sort of strategy for the next few days. It’s hard to control the situation when you’re in the midst of a competition like this. Instead of trying to play it smart, we are going with the flow. We will continue to push and do our best on the stages, while trying not to make any navigational errors. We have valuable rear-guard protection from the #100 Peugeot and Stéphane. It’s good to have them just behind us, just in case…”

“It’s quite a job trying not to lose too much ground to Sébastien LOEB! We only dropped two minutes today and we had some good sport! We were flat out all day and, apart from a short time when we got stuck in sand, it was a fast stage, with some peaks at 180kph. I’m glad to see that I am starting to think ahead, so I’m getting caught out less frequently. I sense where I can be gentler on the brakes and harder on the throttle. David and I are just trying to keep a clear head and be as tidy as we can on the stages. I feel confident and the Peugeot is a delight to drive.”