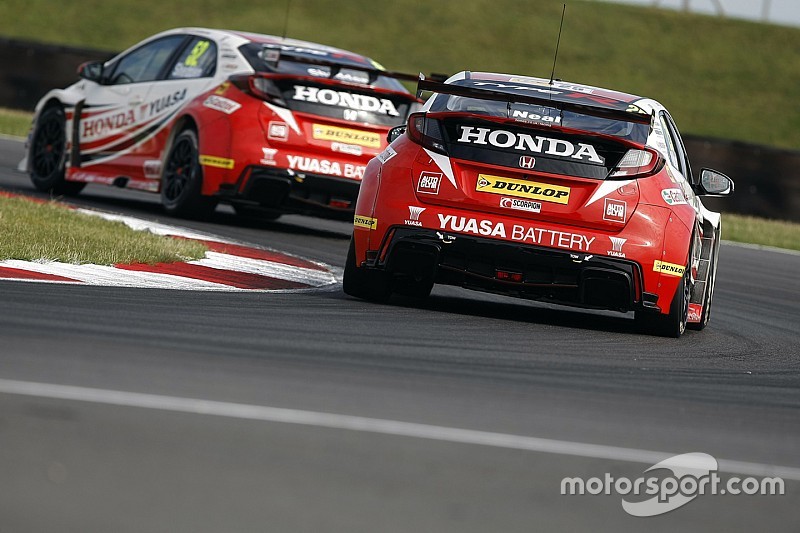 Team Dynamics and Honda are set to continue in the British Touring Car Championship for at least another three years, with a new engine based on the Civic Type-R’s for 2016.

If the programme is finalised, it would mean the partnership between Team Dynamics and Honda will have lasted for at least nine years.

Honda had returned to the championship in 2010 with the team that had previously won titles as a privateer with the Integra Type-R in 2005 and 2006.

“We will definitely be here next year in Hondas,” said driver Matt Neal to TouringCarTimes. “It will be a three-year commitment to the championship. [At the moment] we have a letter of intent but not a contract.”

Neal added that the BTCC is entering a new golden era, with many multi-year deals now becoming the norm throughout the paddock.

“It’s brilliant, to be fair,” he added. “The championship’s higher than it’s ever been in standing; for cars, closeness of racing, you can’t knock it.

“The TV figures are just unbelievable. When saw them, it was like Christmas. Now when we show them to our sponsors, they’re amazed at the exposure we’re giving.”

Championship leaders Honda Yuasa Racing are developing a new engine with technical partner Neil Brown for next season based on the new Type-R engine.

“The one we’ve got at the moment is still based on the K20, it’s got some of the bits of the new one on, but the new (Type-R) one will be completely new, it’s quite different,” said Neal.

With engine equivalence calculations used in the BTCC to balance out the performance differences between the engines in the championship, the team will consult with TOCA and the teams’ Technical Working Group about how the new engine will be balanced in 2016.

“We were going to introduce it this year, but it’s new technology, and the calculations that [TOCA] use can’t apply to that engine,” explained Neal. “TOCA want to understand it properly and be fair, but we are also wary of the correction factor.

"I see TOCA’s dilemma there because if they give us more when we’re leading the championship as it is, but from Honda’s point of view it can’t be slower than the current engine.”

Shedden turns championship race on its head at Rockingham