Honda's World Superbike challenger is losing out to its rivals "in all areas" and there is no one single focus for future improvement, according to Alvaro Bautista.

The Japanese manufacturer has endured a muted start to its second season with its WSBK team under its full control and with the latest-generation Fireblade CBR1000RR-R introduced last year.

In the opening two rounds of the season at Aragon and Estoril, Honda's best results have been a pair of seventh places for Bautista, while teammate Leon Haslam has managed a best finish of eighth.

It leaves the pair 11th and 12th respectively in the riders' standings, while Honda sits fifth and last in the manufacturers' table, already lagging 17 points behind fourth-placed BMW.

Speaking after finishing seventh in Sunday's second full-distance race at Estoril, Bautista admitted that the improvements to the Fireblade have fallen short of expectations and that it's impossible to identify one main area for the Japanese marque to work on.

"Sincerely I expected more improvement [from last season]," said the Spaniard. "In the winter tests the feeling was not too bad and I expected a better feeling and better performance.

"We are struggling a lot with the electronics, with the traction, to make a bike with more stability in all the race, in all conditions. You have to be very precise, otherwise you are losing [time] because the bike works in a different way. It’s very complicated.

"We need to improve in all areas. We don’t miss [anything] big in one area, we are just losing in small things everywhere. All the bike has to improve. It’s difficult to find something that can help us make one step forward."

He added: "I think right now the results aren’t showing the real performance, but the maximum we can do is top five." 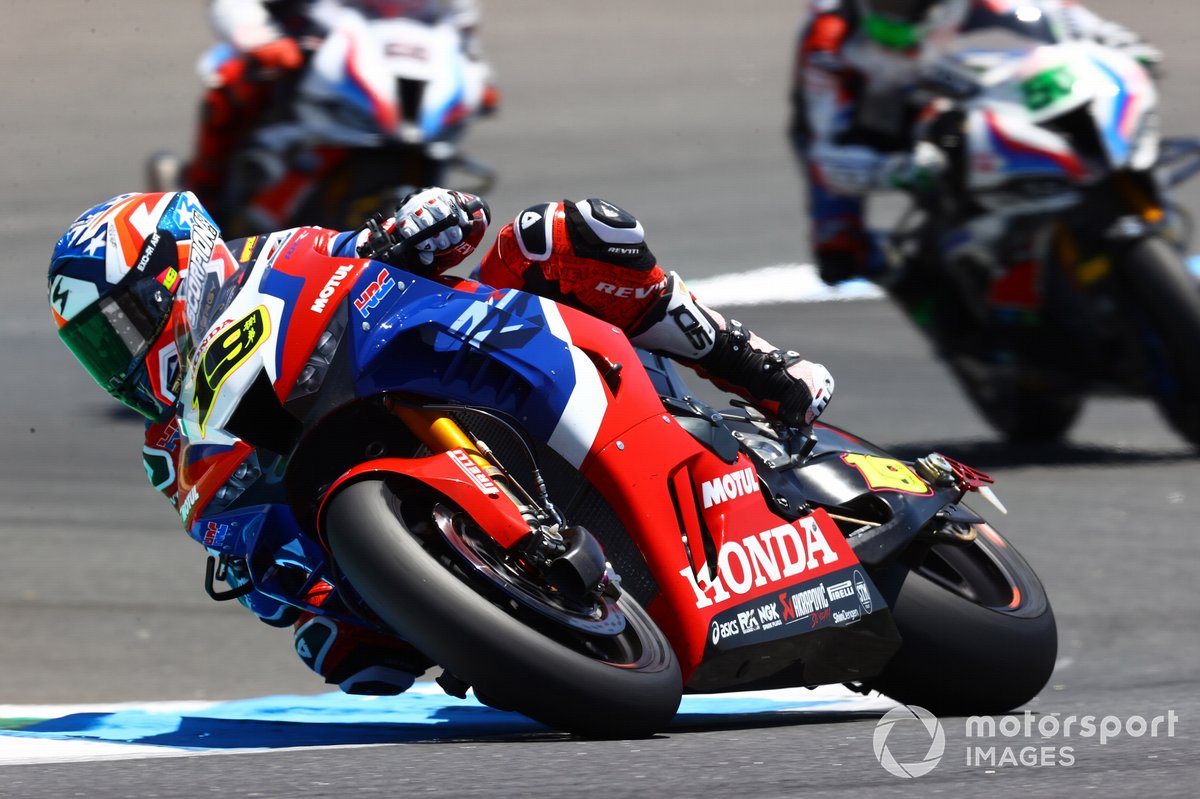 Bautista's Estoril weekend got off to a shaky start as he crashed three times across the two Friday practice sessions, something he put down to the use of the hard compound front tyre.

He ended up qualifying down in 18th place as he was one of a number of riders to lose their best laps due to yellow flags, although he recovered to finish Saturday's opening race eighth before following that up with 10th in the Superpole Race and seventh in the finale.

"Crashing three times for no reason, you miss some confidence," Bautista reflected. "Then on Saturday I started to recover, but we saw the yellow flag at the first corner [during qualifying] and they cancelled my lap, so I had to start from 18th instead of 12th.

"[In the Superpole Race] I missed ninth by one position, if I finished ninth I could have had a good race two [starting ninth], but I started again from the back and it was more difficult with the temperature [compared to Saturday]. I felt much less grip, especially at the front.

"In a normal situation, I could have fought for a top five, but with this qualifying rule, we missed the chance to stay more in front. My laptime is close to the guys at the front, but when you lose seven seconds on the first lap, your race is finished."

Bautista also denied that Honda's current struggles in MotoGP are distracting the Asakadai marque from its focus on winning a first title in WSBK since James Toseland's triumph back in 2007.

"For [Honda] both championships are very important," underlined the one-time 125cc champion. "I don’t think we are doing badly here because they are only focussed on MotoGP.

"We have good support from HRC, but it’s very difficult… even in MotoGP they are struggling."