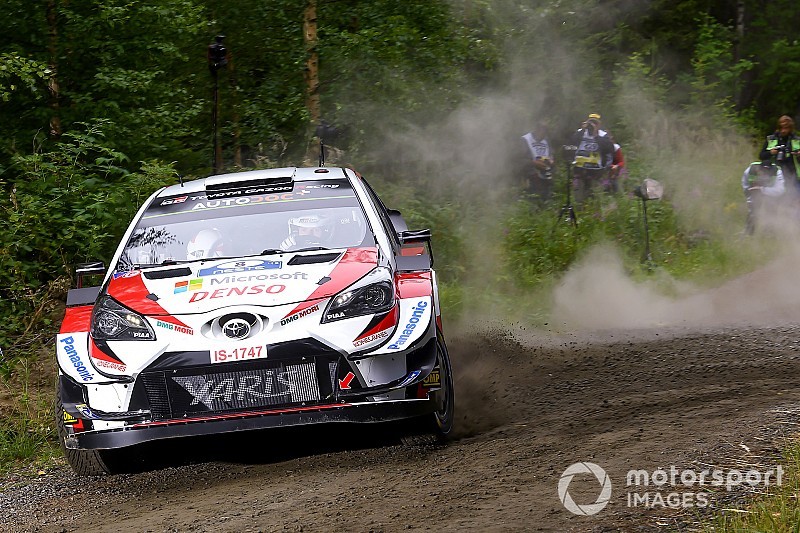 Despite running first on the road, Tanak grabbed the lead after the first stage of the day on Oitilla and extended his advantage over the remaining tests before service.

Toyota dominated the morning running, with Latvala claiming a trio of stage wins to remain Tanak’s closest challenger despite suffering a rear left puncture towards the end of SS5 (Assamaki).

SS3 winner Kris Meeke also suffered a slow puncture on his Yaris WRC after hitting an errant rock on a fast left-hander but lies just four-tenths of a second behind teammate Latvala.

But it was a difficult morning for Hyundai’s Neuville, who had entered the morning loop the rally leader after topping Thursday evening’s superspecial.

The Belgian dropped over 10 seconds to Tanak at the end of SS2, and he shipped a further seven seconds on SS3 (Moksi) before gaining some time back on SS5 and SS6 (Aanekoski).

2017 Rally Finland winner Esapekka Lappi had an impressive morning in his Citroen C3 WRC and lies fourth, just under seven seconds adrift of Tanak. The Finn was just 0.1s slower than Latvala in SS2 and maintained his best of the rest status behind the dominant Toyotas.

The Irishman was sixth-fastest in the opening stage of the day, but set the second-fastest times in SS4 (Urria), SS5 and SS6 on his first WRC event since Australia last year.

Reigning champion Sebastien Ogier is a further 3.5s behind Breen in seventh with Andreas Mikkelsen’s Hyundai close behind in eighth.

Neuville remains inside the top 10, but is a full 10 seconds down on teammate Mikkelsen after a “frustrating” morning where he was unable to find the right set-up to suit the conditions.

M-Sport endured a difficult morning as well, with Teemu Suninen ninth and over half a minute behind the leading times.

Gus Greensmith completes the top 10 in his second outing in a WRC car, deputising for the injured Elfyn Evans. The WRC2 Pro regular is over a minute off the pace after suffering significant time loss with a spin on SS5.