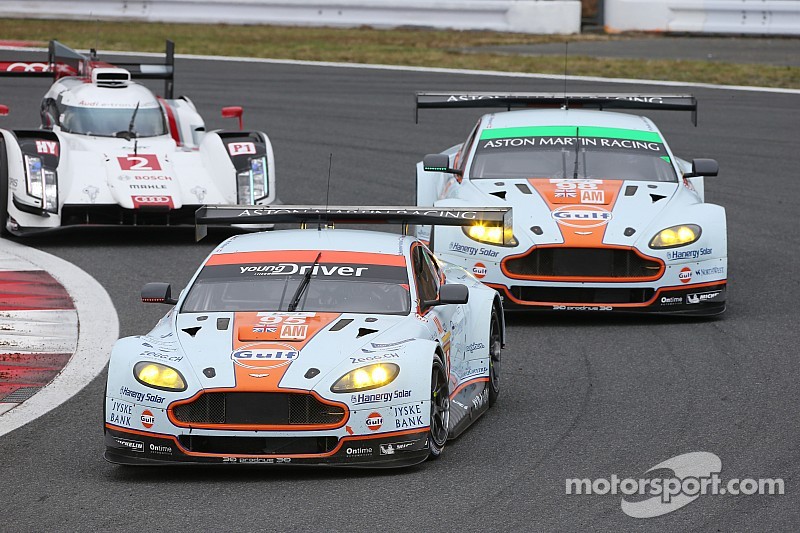 Fuji - Aston Martin Racing has won the FIA World Endurance Championship (WEC) Six Hours of Fuji with its #95 V8 Vantage GTE Am class car. The #98 sister-car finished close behind in second place and the #99 took third place in the GTE Pro class in a race that was action-packed from the start.

At 1100hrs local time, the green flag waved and the #99 and #97 Vantage GTEs started side-by-side on the front row, following a successful qualifying session on Saturday afternoon. However, a chaotic start damaged the #97 and it was forced to return to the pits for an eight-minute stop it could never recover from.

The #99 – piloted by Fernando Rees (BR), Alex MacDowall (GB) and Darryl O’Young (HK) – continued on and spent the next six hours in a wheel-to-wheel battle with the two AF Corse Ferraris. A clever pit strategy, consistently quick lap times and a reliable car all contributed to the #99 Craft-Bamboo Racing team taking its first WEC podium in only its fifth Championship race.

I’m really pleased for the #95 team for extending its lead at the top of the Championship,

“When you start from the front of the GTE Pro class you are in the thick of it,” commented Rees. “You have to make sure that you don’t get caught up in any of the chaos and I did that well. I lost a place to Bruni but quickly recovered it and we led the race for a long time. To get our first podium as a new team in just our fifth race is fantastic. We have to stay focused now and try and do the same in Shanghai and beyond.”

Meanwhile, the pair of Aston Martin Racing GTE Am cars spent the race swapping places at the front of the class with the Danish trio of Kristian Poulsen, David Heinemeier Hansson and Nicki Thiim, at one point, leading the entire GTE field.

Despite challenges from Christoffer Nygaard (DN), Pedro Lamy (PT) and Paul Dalla Lana (CA) in the NorthWest-liveried #98, it was the #95 Young Driver AMR car that crossed the line first to take its third race win of the 2014 season and extend its lead at the top of the Championship.

If a car is easy to drive, like the Aston Martin is, the difference between the Am and Pro is smaller and that’s what wins Pro-Am races.

“It’s great to be leading the Championship,” commented Heinemeier Hansson. “The Vantage GTE makes it easy for gentlemen drivers like Kristian and I to be mixing it up with the professional drivers. If a car is easy to drive, like the Aston Martin is, the difference between the Am and Pro is smaller and that’s what wins Pro-Am races.”

Despite setting the fastest GTE lap of the race, the #97 of Darren Turner (GB) and Stefan Mücke (DE) crossed the line in fifth place due to time in the pits early on in the race.

“I’m really pleased for the #95 team for extending its lead at the top of the Championship,” commented Team Principal John Gaw. “And, it’s good to see our two GTE Am cars so competitive at the front of every race.

“The #99 team has done a good job all weekend and it thoroughly deserves its first podium. Of course, it was disappointing for the #97 crew but the start of the race often takes victims and this time it was us.

“We always do well in Shanghai, we took our first WEC race win there in 2012 and then repeated it in 2013, so we must look forward and focus on keeping our strong record there.”

Podium finish and fourth place for the Porsche 919 Hybrid