Certainly, it wasn’t the hoped for victory, but a good third position greeted enthusiastically at the finish line. The German sports car pilot Stefan Mücke was on the podium for the third time this season in the GTE Pro Class at the fourth run of the FIA World Endurance Championship (WEC) on Sunday evening (26th of August), when the six hour race ended in Silverstone (England). 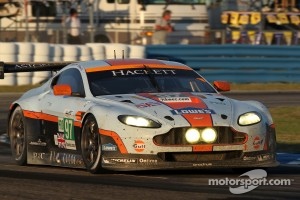 The Aston Martin works driver, who shares the cockpit with his two works driver colleagues Darren Turner (Great Britain) and Adrian Fernandez (Mexico), finished on third position already earlier this season of the WEC ships in the GTE Pro Class, at the season opening in the middle of March at the 12 hour race of Sebring (USA) and lastly at the 24 hours of Le Mans in the middle of June in France.

"I am very satisfied with the third position at the Aston Martin home race in Silverstone. We had no chance against the two Ferrari ahead, because they didn’t need as much petrol as we do and didn’t have to come into the pit that often. But it was a very interesting race, especially during the last half an hour“, Stefan Mücke said.

The 30 year old started the last stint on position four in his class, because Darren Turner had to drive into the pit being on position two, since he had a damaged front splitter. The repair took one and a half minute. Stefan Mücke was on track again with a gap of 30 seconds to the third position ahead. Then the next half an hour „felt like Qualifying“ – as Mücke mentioned – one fastest GTE lap time after another and the Berlin finally managed it to stick at the rear of the Ferrari of Andrea Bertolini (Italy) in the last lap.

"In the last turn before the finish line we were parallel, I drove on the outside and the driver of the Ferrari lost the car on the brakes. The Ferrari touched my car slightly and while I was sliding into the gravel pit he hit me again at the right front“, Stefan Mücke told, who came to the finish line with one flat tire, crashed front splitter and a smoky car.

And after that photo finish he was greeted enthusiastically by his team Aston Martin Racing and he was celebrated by lots of visitors at the home race. The lucky ending of the race has been a highlight the career for the Berlin, who took the lead at his first stint, after he took the Vantage from Turner on position two. "To get a podium placing just before the end of the race and to have such a photo finish doesn’t happen too often.“

The second season half of the long track world championships starts in about three weeks with a six hour race in Sao Paulo (Brasil, 14th /15th of September), but before that, Stefan Mücke is scheduled as racing engineer for the Youngtimer Ford Capri RS of his father Peter Mücke.

The principal of the racing stable Mücke Motorsport, which is engaged at the DTM, Formula 3 Euro Series and European Championships as well as ADAC Formula Masters, will be behind the wheel himself on the 8th/9th of September at races of the Austrian Histo-Cup on the Salzburgring. At last, Peter Mücke had two Youngtimer class victories in his Ford Capri, prepared by Stefan Mücke, on the Nürburgring.

Strakka and Starworks shine for HPD at Silverstone

Fernandez: Local driver will be crucial to IndyCar success in Mexico

Adrian Fernandez has corner named after him in Mexico City