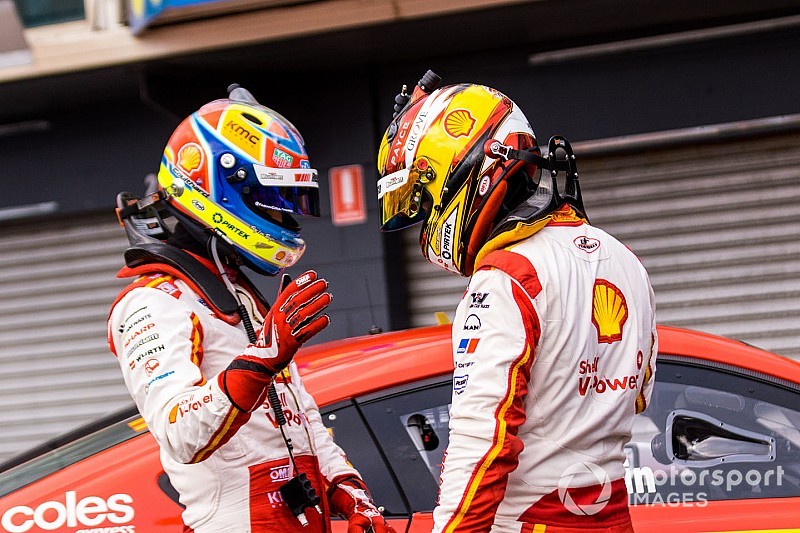 The new-for-2019 Mustang will undergo a second round of parity changes ahead of the upcoming Perth round, with a reduction in rear wing end plate size, a lower gurney flap and a shorter undertray all mandated by Supercars.

It follows a centre of gravity change that was enforced before the Symmons Plains round earlier this month.

While the official communication from both Ford teams, DJR Team Penske and Tickford, has been limited to the initial announcement from Ford Performance, Penske drivers McLaughlin and Coulthard did take to social media to offer their own light-hearted responses.

McLaughlin, who has won eight of the 10 races so far this season, started with a Twitter post stating "nothing like fire in the belly". The likeable Kiwi then posted a photo from a night spot with the caption "parity this, parity that, the boys have gone for a beer..."

Coulthard, meanwhile, cheekily stated that he "wasn't planning on a haircut this week" when retweeting the DJRTP announcement.

Ford legend John Bowe, who won the 1995 Australian Touring Car Championship with Dick Johnson Racing, served up a harsher critique of the situation on his Facebook page, saying the changes 'make a mockery' of the series.

"As you all should know by now, I’m neither Ford nor Holden inclined," he wrote. "I’m a racing and car guy, but this sort of thing going on in the midst of the season makes a mockery of the series.

"It reminds me of 1993 and 1995 when the whinging from Holden had changes made mid season. I️ would have thought that sort of thing would be well and truly behind us. Alas, no!

"What it does show is that the measurement of aero performance by Supercars has been badly flawed for years, as I️ have pointed out on more than one occasion. It’s now time to adopt a proper process. Genuine real live wind tunnel testing in the USA so this bunfight does not happen again! Ever!

"In a category that makes and spends millions of dollars every year, the cost of air freight for three cars to America and some wind tunnel time is a drop in the ocean."

Power wants shots in Supercars at Bathurst, NASCAR on an oval