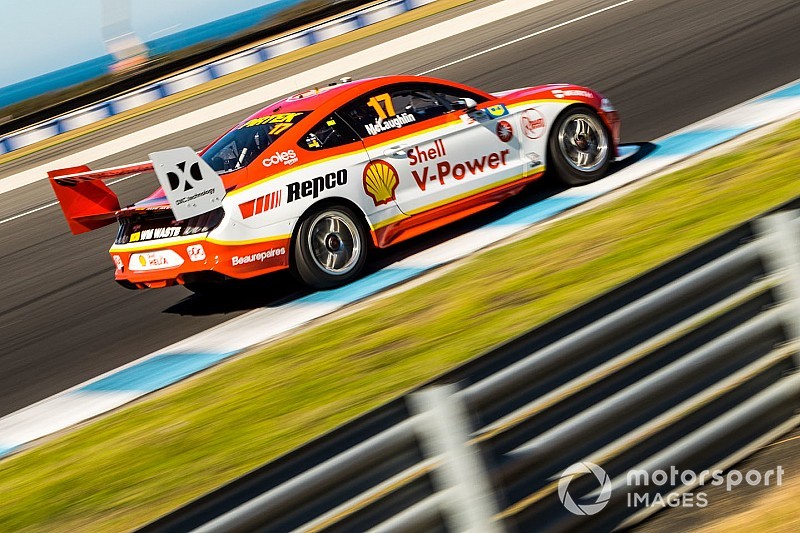 The Ford Mustang will undergo changes to its rear wing and undertray as part of a Supercars parity aerodynamic adjustment.

Off the back of nine Mustang wins from 10 races so far this season, Ford's dominant new racer will now have its aero tweaked in a bid to ease parity concerns from the Holden and Nissan teams.

The Mustang's controversially large rear wing endplates will be made smaller, while the gurney flap will be reduced in height and the undertray in length.

The decision follows analysis of data from the recent Phillip Island round along with CFD assessment, with the changes set to be in place for the upcoming night race in Perth.

“The Mustang is an advanced, state-of-the-art Supercar, designed and built within the rules of the series. We are disappointed that we have had to make changes to the cars, however we respect the Supercars technical department and will comply,” said Mark Rushbrook, Global Director of Motorsport, Ford Performance.

“We will make these changes ahead of the next round so we can quickly understand the affect they’ll have on Mustang to give us the best chance of maintaining our pace.

“Mustang is run by some of the best teams in the series and that’s not technical parity, it is the sporting performance of the teams that race the car."

Rushbrook added that he doesn't expect any further changes to the Mustang's aero, despite ongoing talk regarding overseas wind tunnel testing: “Our car was signed off and homologated by Supercars ahead of the 2019 season, however whilst we understand these changes are in the interest of the sport, we expect to run the rest of the season on track unchanged from this specification.”

According to Supercars CEO Sean Seamer, the process of determining the changes has been transparent.

“The Supercars technical department has worked through the data available and requested these changes from homologating team DJR Team Penske and Ford Performance in a transparent manner," he said.

“The Mustang is a world class racecar and we respect the work that has gone in to developing the package. Despite passing VCAT any incoming car needs to meet the incumbents.

“DJRTP and Ford Performance understand that technical parity underpins the success of the sport and accept the changes.”

The parity adjustment comes after significant debate over the Mustang's aero efficiency, particularly in high-speed corners.

While the car's straightline aero numbers were signed off by rival teams during the VCAT homologation testing, its performance on circuits like Albert Park and Phillip Island has led to speculation that the car generates significantly more mid-corner downforce than the Holden or Nissan.

With yaw performance difficult to assess with the current VCAT process, there has been talk about wind tunnel testing – currently banned by Supercars – being employed to help properly judge aero numbers.

However a lack of suitable tunnel in Australia means that would need to be done overseas, making it an expensive prospect.

The aero change is the second parity adjustment that's been thrown at the Mustang; following the Albert Park round it was the worst affected by a mandated centre of gravity change, which saw 28 kilograms of ballast relocated to the roofline of the car.

Holden's ZB Commodore underwent a 6.7-kilogram redistribution, while the Nissan Altima was unaffected by the CoG ruling.

Reigning Supercars champion Scott McLaughlin has won seven of the races so far this season, while DJRTP teammate Fabian Coulthard and Tickford's Chaz Mostert have a win each, and Shane van Gisbergen has the sole non-Mustang victory to his name.