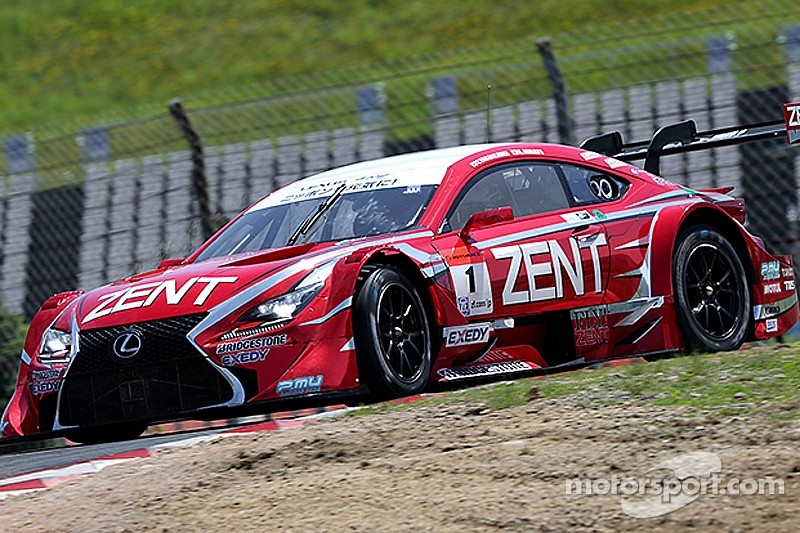 The SUGO GT 300km RACE, Round 4 of the AUTOBACS SUPER GT, was held at Sportsland SUGO (one lap: 3.704256 km x 79 laps) in Miyagi Prefecture on July 20. With rain falling on and off during the race, last year’s GT500 class champion team, the No.1 ZENT CERUMO RC F driven by Yuji Tachikawa and Kohei Hirate ran with consistent speed to eventually lap all its rivals from 3rd place down to win the GT500 race in impressive style. In the GT300 race, the No. 88 MANEPA LAMBORGHINI GT3 driven by Manabu Orido and Takayuki Aoki took the win.

After being cancelled due to rain and fog yesterday, the official qualifying was held this morning and the No. 36 PETRONAS TOM'S RC F team (Kazuki Nakajima/James Rossiter) to the GT500 class pole position, while the GT300 class pole went to the No. 10 GAINER Rn-SPORTS SLS (Masayuki Ueda/Hideki Yamauchi).

After that, the race started at exactly 14:00 under cloudy skies. But, just after the start, rain began to fall. Thinking that the rain would continue, the pole-starting PETRONAS TOM'S RC F (James Rossiter) and the 2nd-place starter, the No. 100 RAYBRIG NSX CONCEPT-GT (Hideki Mutoh), immediately returned to the pit to change to rain tires. However, the rain quit by round the 5th lap, forcing the teams that had changed to rain tire to return to the pit once again to change tires again, thus giving them a hefty time loss. These developments put the No. 37 KeePer TOM'S RC F (Andrea Caldarelli) that had started from 5th position on the grid in 1st place and the No. 1 ZENT CERUMO RC F (Kohei Hirate) in 2nd place, after having started from 11th position.

Although the rain had stopped, the track was still slippery, and with Hirate’s pace exceeding that of Caldarelli, he was able to pass the KeePer TOM'S RC F on lap 18 to take the lead. After that, Hirate continued to expand on his lead and build up a margin of 35 seconds over the KeePer TOM'S RC F in 2nd place by the time he returned to the pit for the routine stop. This put the team’s ace driver Yuji Tachikawa in the cockpit for the second half of the race. As rain fell intermittently from there on, Tachikawa drove with intense concentration to keep control of the ZENT CERUMO RC F machine still running on dry-condition tires. However, with a show of skill worthy of the GT’s winning-est driver, Tachikawa drove on safely in the lead while many behind his succumbed to mistakes in the tricky track conditions. By the time he reached the final checkered flag, he had passed all the cars in his class except the KeePer TOM'S RC F (Daisuke Ito) in 2nd place, thus taking his team’s first win of the season by a huge margin seldom seen in SUPER GT competition.

This win made Tachikawa the sole holder of the record for most GT500 wins, with 16 now to his credit. For Hirate it is his sixth win. This is also the second win for the new Lexus RC F since its debut this season. Finishing 3rd in this race came the No.17 KEIHIN NSX CONCEPT-GT (Koudai Tsukakoshi/Toshihiro Kaneishi), giving new hope for the Honda NSX CONCEPT-GT teams that have struggled thus far this season.

In the GT300 class race, the No.11 GAINER DIXCEL SLS (Bjorn Wirdheim) passed the pole-starting No. 10 GAINER Rn-SPORTS SLS (Hideki Yamauchi) to take the lead in the early running. After that, however, No. 11 suffered a collision in a battle with the No. 50 WAKO'S Exe Aston Martin (Hideto Yasuoka) as it tried to overtake, causing damage to its right front suspension that forced No. 11 to retire from the race. Now in the lead, the WAKO'S Exe Aston Martin would eventually drop off the pace in the second half of the race. Taking its place in the lead in the closing stages of the race was the No. 88 MANEPA LAMBORGHINI GT3. Throughout the difficult race conditions, the No. 88 team’s veteran drivers Manabu Orido and Takayuki Aoki raced on steadily. Still, there would be tense moments when Orido ran off the track near the end of the race, but a buffer of 30 seconds of lead at that point would prove enough to bring the Lamborghini team its first GT300 win in eight years.
(Spectators: 28,000)

Yuji Tachikawa: “I am happy with this win. The balance wasn’t very good in wet conditions. But when it started to rain, things weren’t so bad, and with the track only slightly wet like it was in the race, there was no problem running on dry-use tires. [Kohei] Hirate ran well in the first half and got us a good lead. Also the team made the right decision [in not changing to wet tires], so all I had to do was just drive. That’s how things went. But when it began to rain again in the later stages of the race I had to really concentrate. For me personally, this is my 16th GT500 career win, is it? My biggest aim is to win the championship title, but every win gets us closer to the title, so I’m really happy with today’s result.”
Kohei Hirate: “Tachikawa-san just said that the team made the right decision [about changing tires], but in fact that decision was delayed a bit (grimace). A lot of the teams decided to change tires soon after the start, but those of us whose decisions were delayed ended up staying out on the track as our strategy. That turned out to be the right choice and made a big difference. The car had a good balance in the race, so just running normally I was able to keep building a lead. But, we never knew when it was going to start raining again, so I pushed and tried to build up as much of a lead as I could, and eventually I was able to turn the car over to Tachikawa-san with about a 20-second lead. I have a newborn son, so I am especially happy to be able to take this win home as a present.”

Manabu Orido: “I don’t want to sound like I’m bragging, but today’s win was really a lucky one (wry smile). It is the first win in a long time and I am really glad about that. I am glad that we won in the Lamborghini and also happy to have won it teaming with [Takayuki] Aoki. I’m glad that we kept on trying until we finally won together as we hoped to. Our strategy of going without a tire change was also right on target, and I am grateful to Yokohama Tire for making it possible. In our Suzuka tests we found good tires and that contributed to this win. I want to thank the team, Aoki, the people at Yokohama and our sponsors.”

Takayuki Aoki: “I was the one who drove for the qualifying and I was determined to get a good time on my first [timed] lap. But, that used up the best part of the intermediate (light rain) tires I was running on and I ended up in 9th place. In the end, that turned out to be a fortunate thing, didn’t it? That’s because, while the others were battling in a frenzied state, I was able to start out calmly. And, as I was driving steadily on the others around me were falling away, and before I realized it I was in 2nd place. I turned the car over to [Manabu] Orido in 2nd position, and coming out of the pit with the tire change he was able to take 1st place. After that, I watched nervously on the monitor in the pit as Orido kept up a fast pace. It has been such a long time since the last win for us that I will have to do some research on it, but I hope this will be the start of more good things for us.”