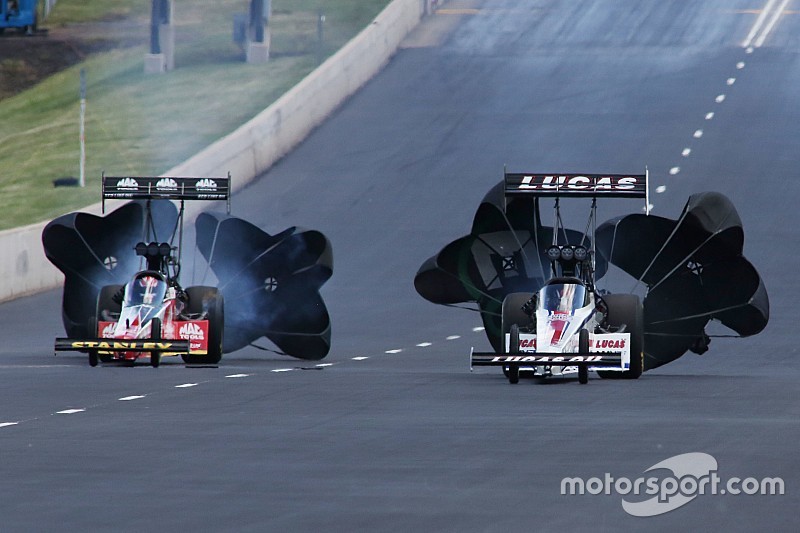 The US Nationals in Indianapolis is one of the most prestigious stops on the calendar.

It’s almost a religious gathering each Labor Day weekend, and this year’s 61st Chevrolet Performance U.S. Nationals, aka the Big Go, will be no different. With racing for both amateur and professional members of the National Hot Rod Association (NHRA) on the docket, runs down the quarter-mile and 1,000-foot dragstrip at Lucas Oil Raceway outside Indianapolis echo more than church bells through the countryside, for nearly a week.

In the professional categories, this is the final race of the regular season before the Top Fuel, Funny Car, Pro Stock and Pro Stock Motorcycle racers begin a six-race Countdown to the Championship.

The Countdown to the Championship has 10 spots in each category. In Top Fuel, four of the top 10 spots have been filled, with eight-time champ Tony Schumacher leading Brown, Richie Crampton and three-time champion Larry Dixon. Racers on the bubble and hoping to get in are Doug Kalitta, Shawn Langdon, Brittany Force, Todd, Steve Torrence and Massey. With the latter’s dismissal, announced last week, opportunity opens for veteran Clay Millican and class rookie Dave Connolly.

The Funny Car Countdown cast is in far better shape coming into Indy with six drivers confirmed for the playoffs: points leader Jack Beckman, Matt Hagan, Tommy Johnson Jr., John Force, Del Worsham and Ron Capps are all in the game. Tim Wilkerson, Robert Hight, Cruz Pedregon and Alexis DeJoria complete the top 10 with Courtney Force a mere 73 points out. Courtney is also looking for a spot in the Traxxas Nitro Shootout for her sponsor Traxxas, hoping to get the final spot and battling with DeJoria.

For the two nitro categories, Top Fuel and Funny Car, there is also a race within this most prestigious race of the year. The Traxxas Nitro Shootout takes place on Saturday night for Top Fuel and Sunday afternoon for Funny Car and provides a cool $100,000 to the winner. The top seven winning drivers are locked into the Traxxas Shootout, while the eighth racer is chosen through fan voting and ping-pong ball roulette (which occurs on Wednesday to lock the field).

The Traxxas Nitro Shootout is a race for winners; now that Spencer Massey has been fired, for the second time in three seasons from Don Schumacher Racing (and replaced by Khalid alBalooshi), Seattle victor J.R. Todd gets the nod as No. 7 in the Top Fuel shootout and will race Antron Brown in the first round.

There are only two spots left in Pro Stock for the Countdown, as eight drivers have already locked in their entries: Erica Enders, Greg Anderson, Chris McGaha, Jason Line, Allen Johnson, Larry Morgan, Shane and Jonathan Gray are in the show, while Vincent Nobile and rookie Drew Skillman complete the factory hot rod’s top 10 in class. V Gaines is 11th, a full 176 points out, making his appearance doubtful. One driver who could upset the standings is Jeg Coughlin Jr., the five-time champion who is making sporadic appearances in 2015, including the U.S. Nationals. Always a threat on the track, he could change the standings with his always proficient passes.

Pro Stock Motorcycle is another class that reeks of parity. Only three riders have qualified for the playoffs coming into Indy: Eddie Krawiec, Hector Arana Jr and reigning titleholder Andrew Hines have already made the cut. The balance of that top 10 are Karen Stoffer, Jim Underdahl, Gerry Savoie, Matt Smith, Hector Arana, Scotty Pollacheck and LE Tonglet. “Tater” Chip Ellis is 26 points out of position 10 while three-time champ Angelle Sampey needs to erase a 51-point deficit.

What all of this means, in the scheme of things is that not only the Labor Day weekend weather will be hot - so will the competition on the track. With 1.5 points available for each round, that means each pass down the dragstrip accounts for 30, rather than the customary 20 points, so deficits can be erased fairly easily in some categories.

Drivers in NHRA’s Lucas Oil Drag Racing Series and the NHRA J&A Service Pro Mod Series will also be on the track in hot competition. The fan-favorite Mopar HEMI Challenge takes place on Friday and features the world’s quickest Super Stock race cars. The always exciting Pro Mod cars will feature event sponsorship from JEGS.com for the seventh of their 10 national events this year.

After each day’s activities on Friday and Saturday, the Thundering Jet Cars make exhibition passes, spewing jet smoke and fire, while on Friday, fireworks close out the day’s activities. Throughout the weekend, vintage race cars will be on display, along with many autograph sessions featuring the sport’s largest stars.

It’s the Big Go and the place to be on Labor Day weekend. As the crowd hawkers have always said, “Be There!!!”