Valentino Rossi says securing a front row starting spot for the British Grand Prix is made sweeter by recent suggestions made by his detractors that he should retire from MotoGP.

The Yamaha rider equalled his best qualifying performance of 2019 at Silverstone as he ended up behind only Marc Marquez - securing his first front row since April's Austin race.

It comes after a small upturn in form for Rossi since the summer break, with improved showings at Brno and the Red Bull Ring following a miserable run of races during which speculation emerged that the 40-year-old could hang up his leathers at the end of the year.

Rossi said the speed he showed at Silverstone proved he still has what it takes to be competitive, despite what some of his critics may claim.

"I know I have the motivation and I can be strong, because also I feel good physically," said the Italian when asked if he felt his performance answered the naysayers.

"Depends very much on the feeling on the bike, in the mid-part of the season I was optimistic because there are tracks I like, but we were in a very bad situation, we got lost a little bit because I am not able to ride the bike.

"Here we see also with [Jorge] Lorenzo. If you are not at 100 percent, you are not P7, you are P18, because everybody is strong.

"It’s normal at my age and at my point of my career, if I make three very bad races, people start to say ‘he’s old, it’s time to stay at home’, it’s like this. For this reason I’m happier, because I know if I can ride well, I can be competitive.

"It’s already a good result, but important is tomorrow to make a good race and fight for the podium."

While Rossi conceded that the flowing layout of the Silverstone circuit was helping Yamaha, he also said that the Iwata marque had boosted its form by doing "clever things".

"The layout of the track, the radius of the corners are good for our bike, medium-fast," said the Italian. "For sure the new asphalt with a good grip helps.

"But looks like in the last period Yamaha start to work in the right direction. They start to do clever things, change very much the situation compared to the last two years, and looks like already with some small adjustments.

"The bike is better, we accelerate better, the bike is easier to ride in more or less every part of the corner. Also if we are not fast enough on the straight, on the rest I think we improve in general."

Asked by Motorsport.com to elaborate on his comment, Rossi replied: "We work good on acceleration, we try to be quite fast to save the tyres, because in the last years we always suffer, maybe you can do five laps but after we suffer with tyre degradation.

"Here at Silverstone is good for Yamaha but also in Austria we were not so bad. [Fabio] Quartararo was on the podium. We were a bit too far from [Andrea] Dovizioso and Marquez, but a lot of better than in the last years." 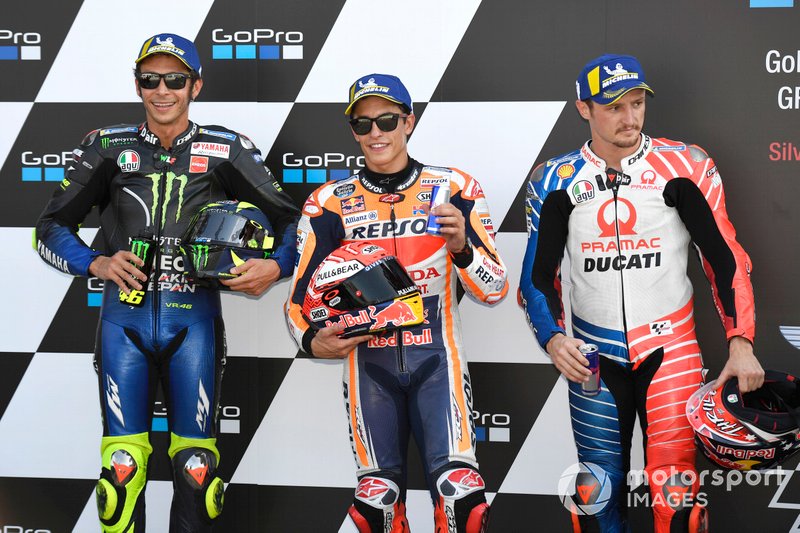 Lorenzo: Pushing to qualify better 'not worth it'