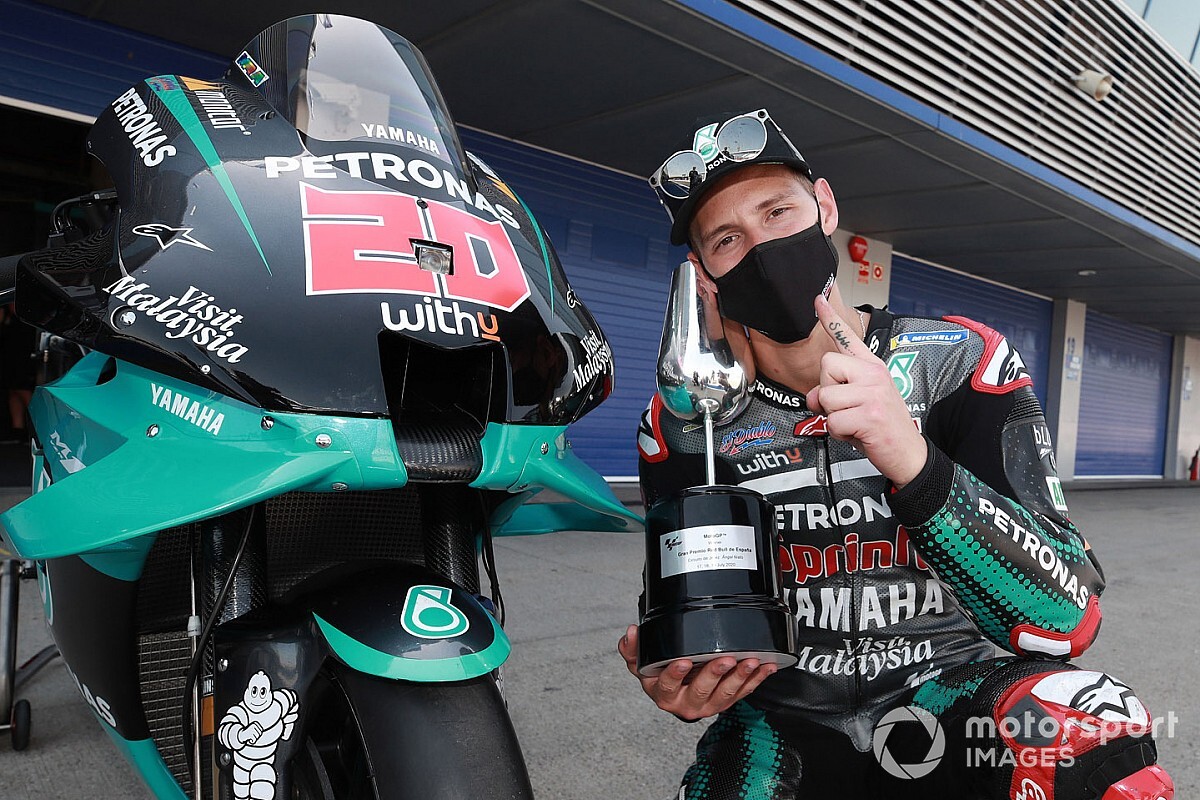 The Petronas Yamaha rider capitalised on an early moment for Marc Marquez and a Maverick Vinales struggling with his front tyre to seize the lead on lap nine of Sunday’s season-opener.

From there, he built up an unassailable advantage of 4.6 seconds to claim his first MotoGP win at the same track he had his maiden podium snatched from him by mechanical issues last year.

Commenting on his win immediately after the race, the 21-year-old said: “F****** hell, the best moment of my life for sure.

“You know, it feels so strange to race without the fans. And, honestly I would love them to be here to cheer with them, but honestly this race was for them, was for all the people affected by COVID.

“And [it’s] for my family, my brother always supporting me, my parents.”

Quartararo’s victory makes him France’s first in the premier class since Regis Laconi in Valencia back in 1999, and the first non-Honda satellite rider to win in the MotoGP era.

The Frenchman came close to victory on two occasions last season: at Misano and at Buriram, both times losing out on the final lap to Marquez.

Despite the attrition rate seen through the race, Quartararo says he felt more “safe” leading the last laps than he did in last year’s Thailand GP – though concedes the final 10 tours were “the longest of my life”.

“Here was a totally different race [to Thailand], because I made a gap,” he added. “So it was more easy to stay focused on the last lap because I was much more safe than the last lap of Thailand when I was on the limit.

“The last 10 laps were the longest 10 laps of my life, to be focused in these kind of conditions where the grip is really low.

“So happy about the result, and we will try to work [to be better] in these conditions.”

Quartararo’s race at Jerez last year ended with a gear shift issue robbing him of second place, and he admits he had “the scariest” moment of the race late on when he thought he was about to suffer a repeat late on.

“I had one of the scariest moments of the race,” he said. “Was exactly the same place [Turn 5], I wanted to put the gear and it [makes juddering noise].

“I say ‘Oh no, not like last year’. Finally I downshifted and it was OK, I just missed the gear shifter.”