Pedrosa "so much better" than KTM expected

KTM motorsport boss Pit Beirer says Dani Pedrosa's impact has been "so much better" than what the manufacturer hoped for when it hired him as its MotoGP test rider.

Pedrosa joined KTM in a test role at the conclusion of his 13-year MotoGP stint with Honda, and has been working on a new package for 2020 that has received rave initial reviews from the team's lead rider Pol Espargaro.

Johann Zarco's sudden exit has left KTM with a hole to fill in its 2020 line-up, but Pedrosa has repeatedly made it clear he is not interested in a return to MotoGP racing.

Beirer has made it clear KTM has no issue with Pedrosa's stance, especially in light of the work he has been doing in his current position.

"When Dani signed a contract with us, we asked him the same question about wildcards, if we should plan on that, and he gave us a clear ‘no’," Beirer said.

"He said he stopped as a racer for a reason, so he put everything into testing.

"We are 100 percent fine with that decision. It’s something that could really help us today, to have results on the racetrack, but first all of he cannot reach anything he could not reach during his fantastic career, it would only bring him trouble.

"And we need him, definitely. What he is doing for us as a test rider at the moment is so much better than I was thinking, or hoping, that he will be a key person in our project for the future. So no problem [that] he said no."

Speaking earlier this season in Misano, Espargaro had offered a similar opinion about Pedrosa's KTM commitment.

"Dani is taking this situation very seriously, more than I ever expect, honestly," he said.

"When he retired from Honda, he was quite burned with this MotoGP world. For me it was difficult to trust that he would give 100 percent of his performance with another bike, [one that's] a priori a little bit worse than the Honda.

"But he jumped onto the bike and you cannot believe how seriously he's taking this project. He went into the factory to put everyone straight, he's doing everything with a lot of effort.

"When something is going wrong, he wants to know why it's going wrong and who made this stuff go wrong. He's sometimes an angry guy, because he wants everything perfect. Honestly, he's very precise and likes everything well done."

Beirer said KTM would find it hard to turn Pedrosa down if he'd changed his mind about racing, but added: "To be honest I hope the call is not coming.

"If we look to the project in mid-term, I think it’s healthier if he doesn’t call me for this [reason]." 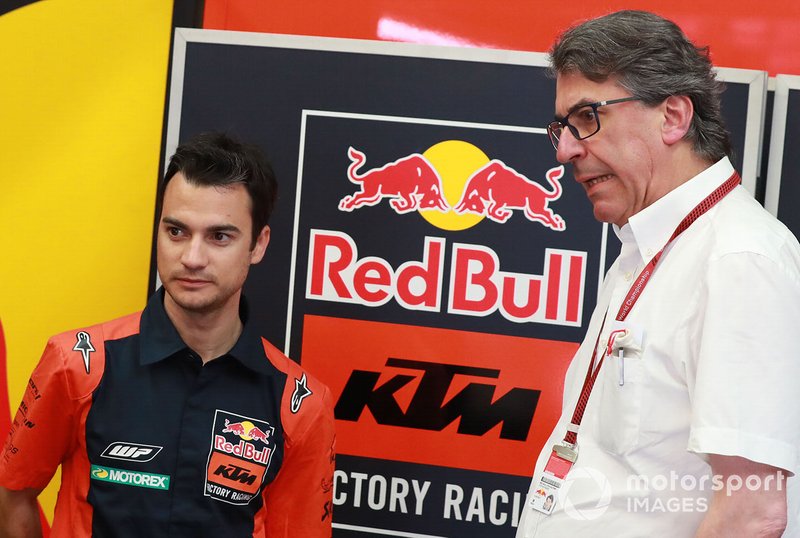 KTM: We promoted riders too soon KTM admits it "pushed too many great Moto2 riders to MotoGP too quickly"