Morbidelli "not aiming" at title bid after maiden MotoGP win 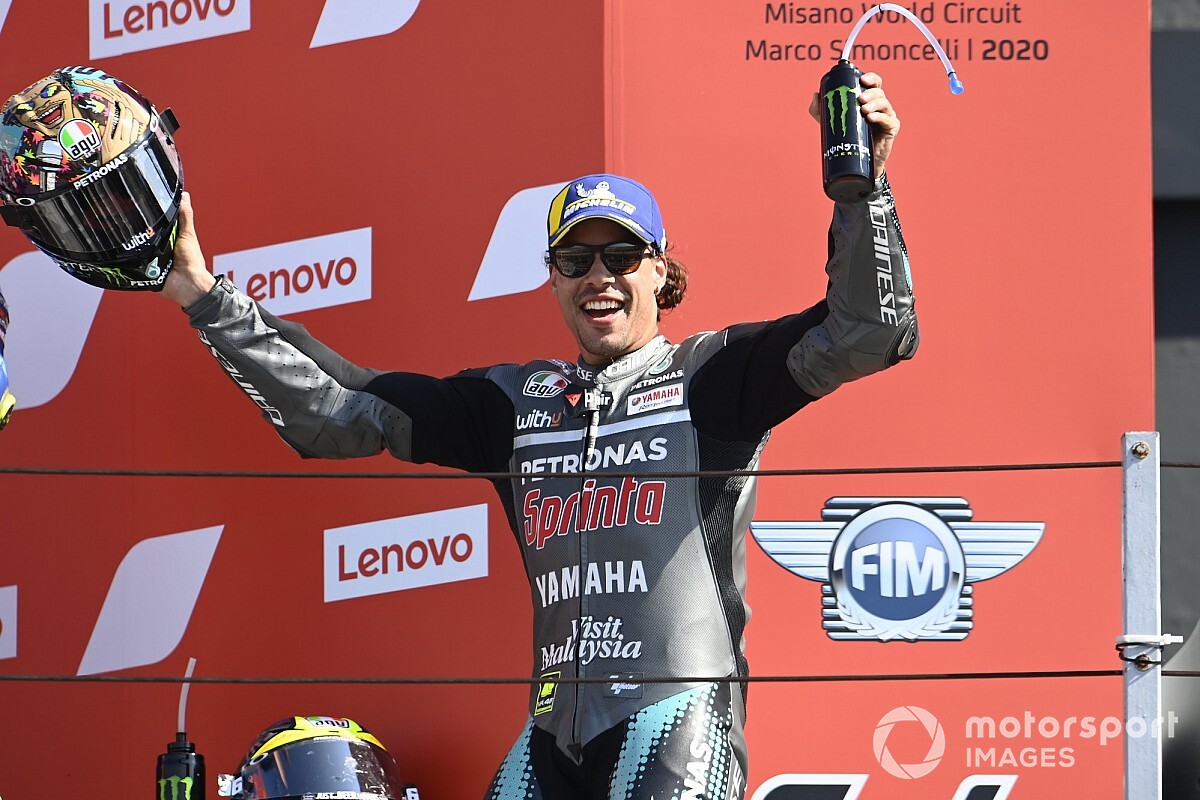 Franco Morbidelli admits he is “not aiming” at a MotoGP title tilt after scoring his maiden victory in Sunday’s San Marino Grand Prix, as he is “just a satellite guy”.

The Petronas rider grabbed the holeshot in Sunday’s Misano race from second on the grid and led factory Yamaha counterpart and mentor Valentino Rossi closely in the opening stages.

By lap 12 Morbidelli had gapped Rossy by seven tenths, with his lead extending to two seconds by the 18th tour – a 1m32.7s effort on lap 15 proving to be over half a second quicker than Rossi, and ultimately broke the factory Yamaha rider.

Morbidelli went on to win his first race by 2.2s from fellow VR46 Academy rider Francesco Bagnaia, while Rossi faded to fourth.

Now just 23 points behind new championship leader Andrea Dovizioso - after his Petronas teammate Fabio Quartararo crashed out - Morbidelli admits his thoughts have not turned to a title tilt as he is “just a satellite guy” currently not occupying machine parity with the other Yamaha riders.

“I'm just thinking about winning races, and doing the best result that I can every Sunday and I will see where I'll be at the end of the year.

“But I'm thinking about race by race. Because after all, I'm just just a satellite guy.

Commenting on his race, Morbidelli said he had “pressure” from Rossi in the early stages and was hoping both wouldn’t “bother” each other as they quickly pulled away from the rest of the field.

“In my opinion, the race went just fine,” an understated Morbidelli said. “I got a good start and in the beginning of the race I felt the pressure from Vale.

“I was seeing that we were pulling away, and I was just hoping to not bother each other, and that’s what happened.

“And after some laps I saw that I was pulling away, so [that was] an even greater surprise.

“So, when I saw that I was pulling away I just said to myself ‘just put your rhythm on track and just trying to maintain your rhythm, just do what you can’.

“Actually, what I was seeing on the dashboard was pretty impressive.”

Morbidelli called the last 10 laps the “most important” of his life and was able to “think about many things” on his way to victory.

“Then the last 10 laps were unbelievable because I had the chance to think about many things and was a great feeling,” he added.

“They were for sure the most important 10 laps of my career and my life.

“I had a lot of fun, and I just want to say thanks to all my team and to all the people that have been working with me.”

Vinales: I was just a “cone on the track” in Misano race