Miller was set to replace Lorenzo before Japan crash 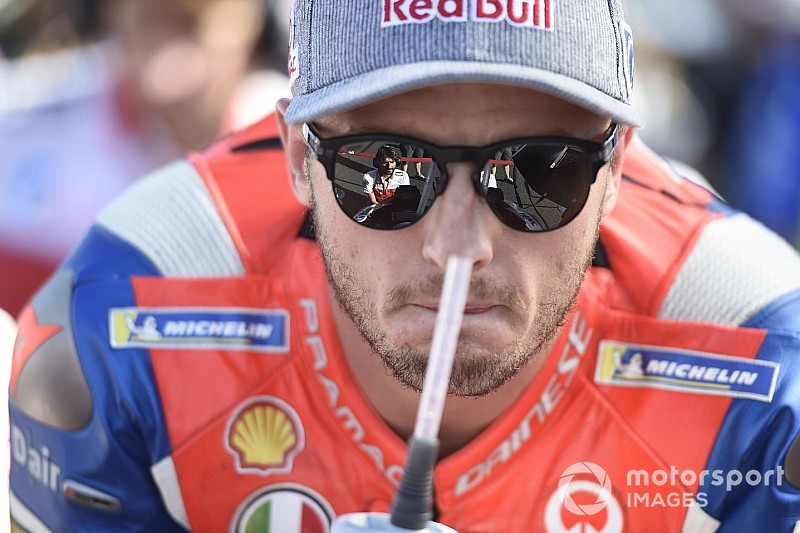 Jack Miller says he'd agreed to be Jorge Lorenzo's replacement on the factory Ducati for Phillip Island, only for a pair of crashes in Japan to change the Italian manufacturer's mind.

The Aussie reckons he was in line to debut for the factory squad at his home race today, having been named as Ducati's preferred choice as Lorenzo's replacement.

However he says the decision was reversed after both he and Andrea Dovizioso crashed out of the Motegi race, which led to Ducati wanting to focus on the independent teams' title.

That meant Miller was forced to stay on his Pramac bike for Phillip Island, while Alvaro Bautista was promoted from the Angel Nieto squad.

"After feeling a bit flat on Sunday after the Japan race, I arrived at the Island for weekend still thinking about a chance to ride something different for my home race that didn't quite happen," Miller wrote in a column for Red Bull.

"When we were in Japan last weekend, Jorge pulled out with injury and was ruled out for the Island as well, so it looked like I may have an opportunity to have a ride of the factory bike alongside Dovi at my home GP.

"Before the race at Motegi, that was the plan we'd decided on with Ducati. But then it all went pear-shaped on Sunday in Japan for me; I crashed out of the race, and when Dovi fell off and didn't score any points, Ducati were more keen to me to stay on my usual bike for Australia so we could try to keep the lead in the independent teams' championship with Alma Pramac Racing, because the manufacturers' championship for Ducati was more or less out of reach after no points in Japan.

"They put Bautista on Jorge's bike for the Island instead, so it probably wasn’t much of a surprise that I was a bit disappointed after Motegi when the plans changed and I'd ended up on my bum in the gravel and stuffed my own race."

A promotion to the factory bike would have been a dream scenario for both Miller and Australian GP organisers, given the wave of momentum the event rode during Casey Stoner's six consecutive wins between 2007 and 2012.

"I got over it quickly enough, but you had to wonder what it would have been like. Aussies on red factory Ducatis tend to go alright at Phillip Island, don't they," added Miller.

"Anyway, there's no point looking backwards, just now looking forward to getting my hands on the factory bike starting at Valencia in the last test of the year."

Bautista ended up finishing the Australian GP in fourth, while Miller slipped back to seventh after leading briefly on the first lap.