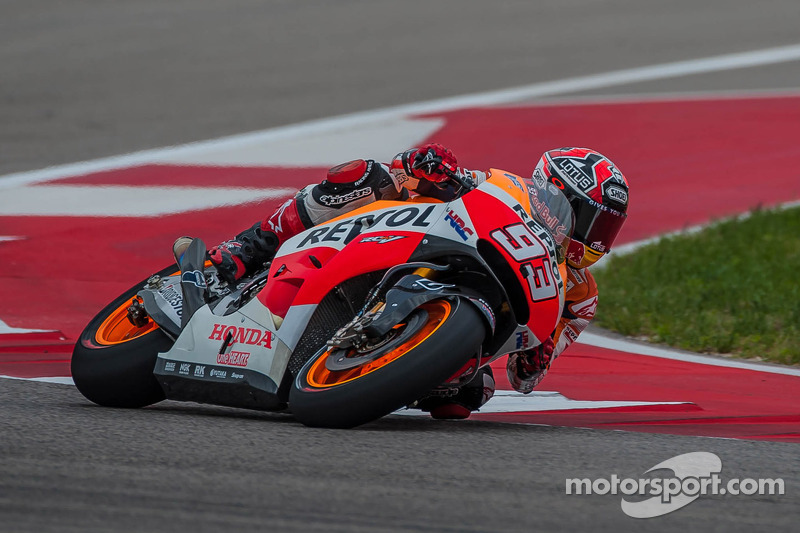 Marc Marquez continued his dominance of the field ahead of Sunday’s Red Bull Grand Prix of the Americas with the reigning MotoGP World Champion setting a new pole position record to take the top spot despite a number of big moments on his Repsol Honda RC213V while his teammate Dani Pedrosa wills start from second and making it an all-Honda front row is Stefan Bradl on his LCR Honda machine.

I have a good feeling with the bike and have been setting a good pace ahead of tomorrow's race.

Within the 15 minute Q2 session Marquez had a number of near misses but he remained unfazed to set the new pole record of 2m 02.773s with Pedrosa a further 0.289s back while Bradl was also knocking on the door with a 2m 03.196s lap. Aleix Espargaro had to tough it out in Q1 to make it into the final qualifying session but the Spaniard had a super final 15 minutes and will start on his NGM Forward Racing machine from fourth place with a best lap of 2m 03.240s.

Jorge Lorenzo had as good a qualifying session that he could have hoped for with the Movistar Yamaha rider setting the 5th best time of 2m 03.243s and just 0.003s in front of his teammate Valentino Rossi. Cal Crutchlow heads the third row with the Ducati Team rider setting a best lap time of 2m 03.780s and just over half a second ahead of his fellow countryman Bradley Smith on the Monster Yamaha Tech 3 machine.

Andrea Iannone enjoyed a good day today on his Pramac Racing Ducati with the Italian setting the 9th fastest lap of 2m 03.842s and ahead of Andrea Dovizioso whose best lap of 2m 03.846s was good enough to stay ahead of Pol Espargaro on the second of the Monster Yamaha Tech 3 machines with his best time of 2m 03.913s enough to see him start in 11th ahead of Alvaro Bautista on the GO&Fun Honda Gresini with a best time of 2m 03.923s 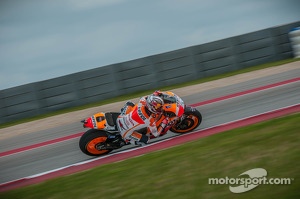 Scott Redding had a successful day on his GO&Fun Honda Gresini setting a best time of 2m 04.617s and starts ahead of Nicky Hayden for the Drive M7 Aspar team with Yonny Hernandez also had a good day on the Energy TI Pramac Racing Ducati with a best time of 2m 05.677s. Hiroshi Aoyama starts from 16th place on the second Drive M7 Aspar with his best time enough to stay ahead of Karel Abraham who set a best lap 2m 06.239s for the Cardion AB Motoracing team.

Speaking after taking his pole position Marquez said, “I’m very happy with how the weekend is going and with the qualifying session - especially taking pole position. I have a good feeling with the bike and have been setting a good pace ahead of tomorrow's race. We will try to get a good start and I'm sure we'll be fighting with Dani, as he is our strongest rival. I think that the beginning of the race will be the most important part, because with this heat the tyres suffer a lot. I will try to remain focused and have a good race!” 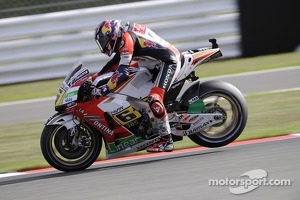 Pedrosa was also happy to take the second best time of the day stating, ““We improved the bike a lot today and I was able to ride much better than yesterday. I managed to come very close in qualifying and hope to take advantage of all my chances to win tomorrow's race. Last year we came second so I will look to take one step further tomorrow!”

Taking a third place start, Bradl was upbeat afterwards saying, “For sure we are very happy today because a front row is always a great result and for me it’s even more special because I like this track. We have done a good job on the bike improving a lot from Friday to Saturday and gaining more feeling with the tyres. Even in the free practices today our pace was pretty good as we lapped constantly in the top-four. The race is going to be tough because the Yamaha guys are very close and Dani and Marc are very fast but I remain concentrated and will do my best to finish this race with a positive result”

Marquez on record pace in Friday Practice at Austin