The number 69 made famous by 2006 MotoGP champion Nicky Hayden has been retired by series organisers Dorna and governing body the FIM in a ceremony at the Grand Prix of the Americas in Austin.

Hayden died as a result of head injuries sustained in a road traffic accident in Italy in 2017.

In an emotional ceremony in Austin, that was attended by many family members including his father Earl, MotoGP promoter Carmelo Ezpeleta explained the reasons behind the decision to bestow this honour.

“Since the beginning, after we lost him, we were thinking it’s something we must do because Nicky was someone special to all of us,” said Ezpeleta. “His behaviour, how he managed himself with us, it was fantastic. We spoke to FIM, and it’s an honour to retire the number 69 forever, it’s something very important. We are proud to do this today. To have had Nicky as part of our history was a great honour.”

A moving video was shown of Nicky from his earliest riding days through to his MotoGP glory years, and then his eldest brother Tommy spoke on behalf of the family.

“Nicky loved MotoGP for a reason – because there was a lot of good people there, straight from the top,” he said, also acknowledging FIM president Jorge Viegas who was present. “Nicky had a lot of success on the track, but I think we all agree he made just as big an impact off the track on everyone’s lives. That’s something, as a family, we’re most proud of.

“The number 69 is a special number in our family: my dad raced with it, and we always raced with it – Nicky carried the number through his whole career, so it has a lot of meaning. To have it retired from MotoGP, the pinnacle of the sport, it means a lot of us. It keeps Nicky’s legacy alive.” 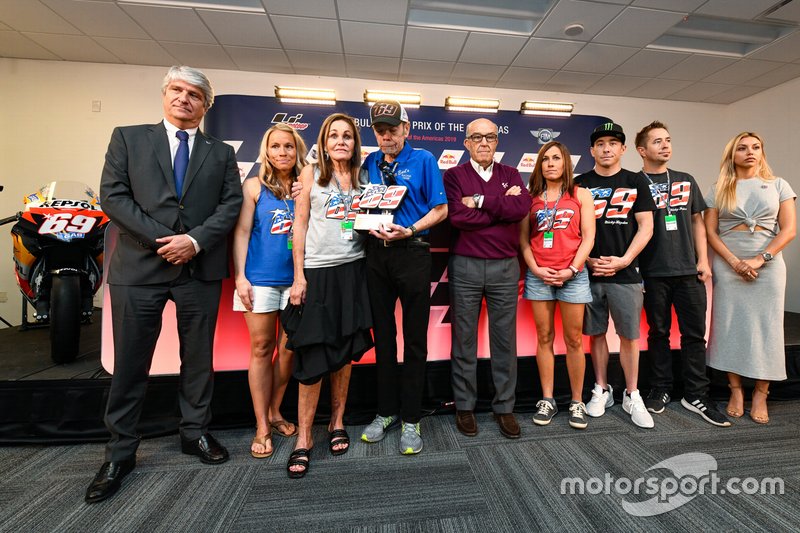