Marc Marquez and Andrea Dovizioso have both explained their crashes during the second day of pre-season MotoGP testing at Sepang.

Reigning champion Marquez is riding below peak physical fitness due to a recent operation on a shoulder injury he picked up at last year’s Malaysian Grand Prix, and said his shoulder felt worse than he expected on Friday.

Completing 37 laps on Friday, Marquez managed 47 on Saturday and cracked the top 10 in ninth place, with a laptime just 0.417 seconds off the pace.

As the session neared its conclusion, Marquez came off his Honda at the fast Turn 3 right-hander – though admits he was “going slow”, having finished his programme for the day.

“The shoulder is coming better,” Marquez said. “I start the day with a lot of energy and I can ride the bike, but then I feel and I push, and immediately after the second two runs I start to drop [energy]. It’s normal.

"But the most important thing is it’s not worse than yesterday. Today I achieved our target; yesterday was around 30, 35 laps, today was 45. We did 47 and unfortunately when I was going to the box - I had already finished the day - I was on the dirty line.

“I don’t know why, maybe because I was tired or something… of course if you check the corner you say, ‘woah, it’s a fast corner’ but I was [going] slow. So it was not a big crash.

Dovizioso was the other high-profile crasher on Saturday, with the Italian coming off at Turn 6 in the afternoon and briefly bringing out a red flag.

Though he was able to return to action, he admits he couldn’t breathe after hitting the gravel and aggravated a pre-existing neck issue.

“[I] didn’t push 100 percent in that moment, just opened the throttle at maximum angle in Turn 6 and I lost the front,” he explained. “Really small and easy crash.

"But, unfortunately I went to the gravel and [the impact] wasn’t flat. So, I couldn’t breathe. The problem is always with my neck. I hit it on top, now I’m really rigid.

“I hope tonight it won’t become worse because it’s always my characteristic.”

He added: "I wasn’t pushing 100 percent, so I just have a bit of a different set-up and I was starting to push. It was a bit strange for me to lose the front like this.

"I don’t know if it was set-up, or I did something really bad. Still I have to check the data [to see] if I opened the throttle too early or I have one, two degrees more [lean] angle. With Michelin sometimes it’s enough." 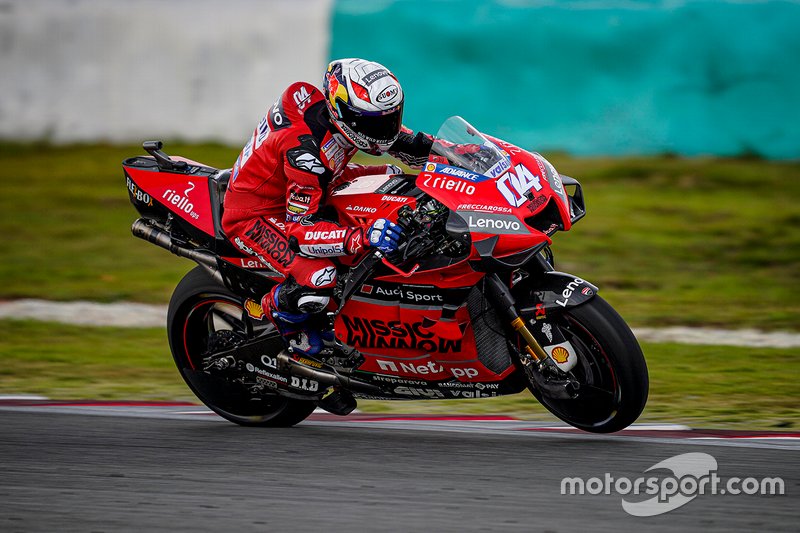