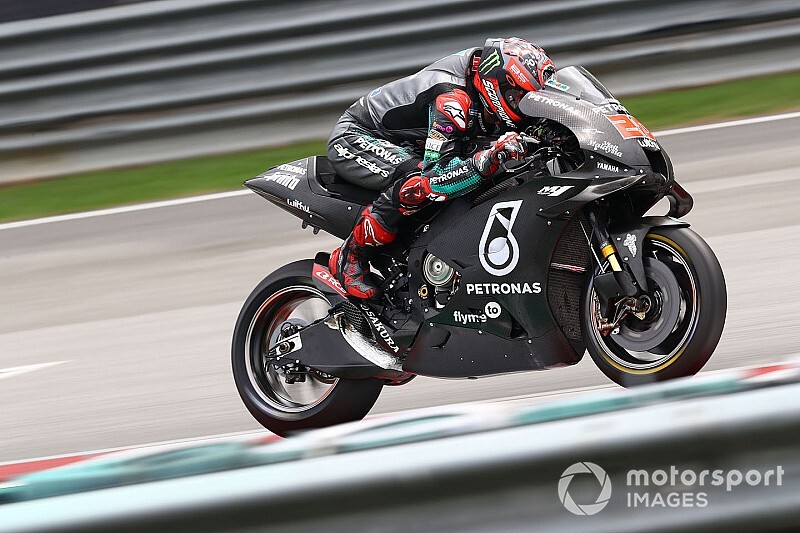 Petronas SRT rider Quartararo was fastest on Friday aboard the 2019-spec Yamaha, but finally took delivery of the new 2020 M1 and spent most of the day on that.

Quartararo was once again first out on circuit, though it was Suzuki’s Joan Mir who led the timesheets after the first hour with a 1m58.731s lap ahead of KTM’s Pol Espargaro.

Pramac’s Jack Miller took over from Mir as the session entered its third hour, with the Ducati rider’s 1m58.641s effort remaining the benchmark until the final hour.

Miller spent the day evaluating Ducati’s GP20, and also had a revised aerodynamic package to test on Saturday.

The session was paused briefly in the afternoon when Andrea Dovizioso crashed his Ducati, with the Italian unscathed in the off and returning to action soon after.

Another high-profile crash followed in the final hour, as Marquez went down at the fast Turn 3 right-hander, having managed 47 laps on Saturday before his fall.

Soon after, Quartararo shot to the top of the times with a 1m58.572s, which went unchallenged as the chequered flag fell.

Miller held onto second, 0.069s adrift, while KTM test rider Dani Pedrosa posted his fastest-ever lap of the Sepang circuit with a 1m58.662s to complete the top three.

Alex Rins headed Pol Espargaro on the second Suzuki, with Marquez ninth despite his crash and Valentino Rossi rounding out the top 10 on the second factory Yamaha.

Aleix Espargaro was just 0.652s off the pace in 11th on his Aprilia, with LCR Honda’s Cal Crutchlow and Ducati’s Danilo Petrucci shadowing.

Dovizioso ended up 15th following his accident, while Alex Marquez was top rookie runner in 17th on the factory Honda – some 1.089s off the pace.

Lorenzo to ride on final day of Sepang test