Jorge Lorenzo says he will face “the same situation” going up against Marc Marquez at Honda as he did when he partnered Valentino Rossi at Yamaha as a MotoGP rookie.

Lorenzo has left Ducati to replace Dani Pedrosa at the Repsol Honda outfit, which helped Marquez to five MotoGP riders' titles in the past six years.

Rossi was likewise a five-time champion when Lorenzo arrived at Yamaha in 2008, and the Italian added two more titles to his tally before Lorenzo secured his first crown in 2010.

“During my career in MotoGP I share the box with probably four riders - Valentino, [Ben] Spies, Dovi [Andrea Dovizioso] and now with Marc, and this situation is quite similar from the one when I start in MotoGP in 2008,” Lorenzo said.

“At that time Valentino was in the peak of his career - he didn't win [the championship] in 2006, 2007, but he was always fighting for the world title and he knew the bike a lot.

“[It's] more or less the same situation I have now that I come to a new team, Marc as a very very strong teammate, knowing a lot the bike.

“For sure in that area Marc has a big advantage.”

Lorenzo says he will approach his debut season alongside Marquez, who has 44 premier-class wins to his new teammate's 47 despite having joined MotoGP five years later, “with a lot of humility”.

“I always say that he is a phenomenon,” Lorenzo said of Marquez.

While Lorenzo's famously smooth riding style changed during his time at Ducati, it remains clearly different to that of Marquez.

But the reigning champion is convinced this will not be an issue for Honda, as Lorenzo's initial feedback about the RC213V's shortcomings has matched his own.

“For Honda is not a big problem, because already when Dani was in the box we had a completely different riding style,” Marquez said.

“And Honda has enough potential, especially HRC [Honda Racing Corporation], to have two different ways to improve the bike.

“So this is the way to work with all the team and try to improve for this 2019.” 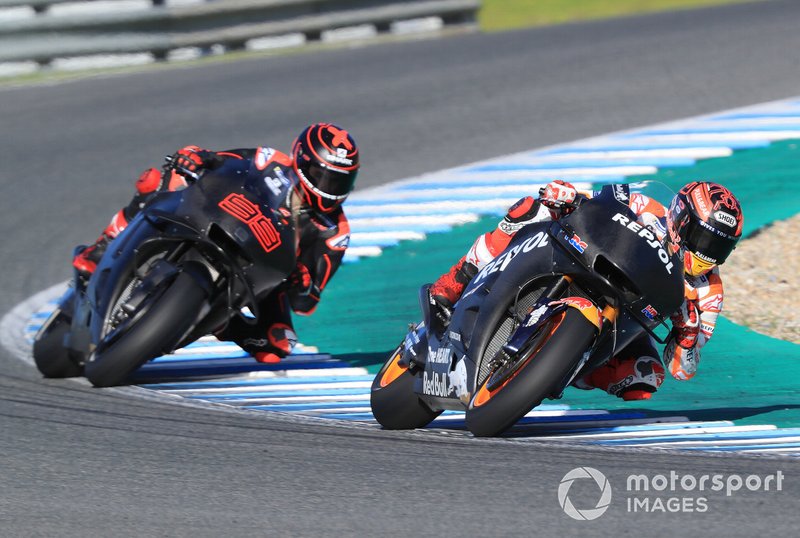 Morbidelli: Having same bike as Rossi will help us both