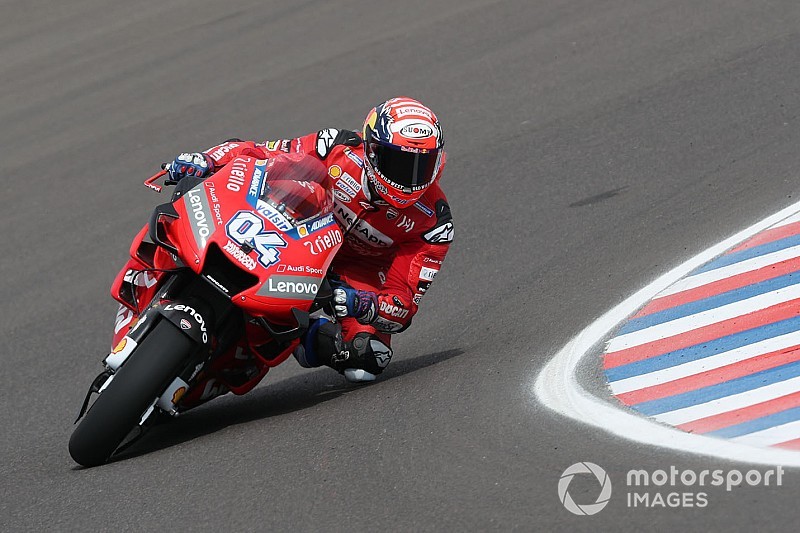 FP1 pacesetter Marc Marquez led much of the 45-minute session, beating his benchmark from the morning with a 1m39.812s before improving to a 1m39.497s.

However, the Honda rider opted not to equip a new soft rear tyre for the closing stages, and slipped back as first Cal Crutchlow and then Miller both beat his time.

Crutchlow (LCR Honda) surged to the top of the timesheets with a 1m39.346s with four minutes left on the clock, but moments later that was surpassed by Pramac Ducati man Miller's 1m39.190s.

Dovizioso then eclipsed Miller - the only rider to crash with an early low-side at Turn 13 - with a 1m39.181s effort just before the chequered flag came out.

Maverick Vinales leapt up to third on the best of the Yamahas, beating Crutchlow to third place by a single thousandth of a second.

Two more Yamahas rounded out the top six, with Fabio Quartararo (Petronas SRT) falling only 0.012s short of Vinales and almost a tenth quicker than Valentino Rossi on the second works bike.

Alex Rins (Suzuki) ended up seventh ahead of Marquez, Franco Morbidelli on the second Petronas Yamaha and Takaaki Nakagami's LCR Honda, the top 10 split by less than half a second.

Aprilia riders Andrea Iannone and Aleix Espargaro took 11th and 12th ahead of Danilo Petrucci, who was 0.559s slower than his Ducati teammate Dovizioso.

Pol Espargaro led KTM's efforts in 16th after a lurid excursion through the gravel at the very start of the session, a place ahead of Johann Zarco.

Jorge Lorenzo endured another session to forget on the second Repsol Honda, managing only 21st place with a time 0.978s off the pace. Hafizh Syahrin (Tech 3 KTM) was the only rider slower than the three-time premier class champion.