Lorenzo: Injury not cause for poor Argentina pace 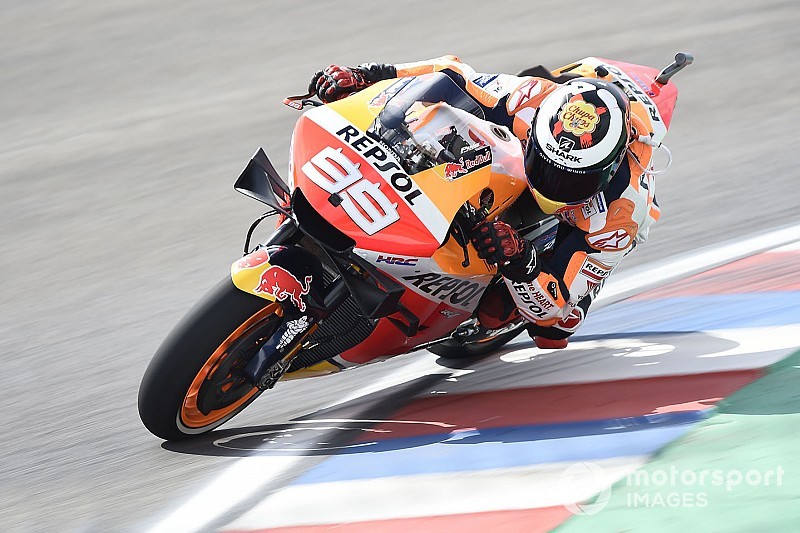 Jorge Lorenzo says that his woes on the opening day of MotoGP's Argentine Grand Prix were more due to his inexperience with the Honda bike, and not his lingering injuries.

Lorenzo sustained two injuries before his race debut with Honda as he fractured his left wrist while training in January, and then cracked a rib during the Qatar race weekend.

Heading into the second round of the season in Argentina, Lorenzo said that he will be "extra" careful not to crash again, and he ended Friday in 21st, ahead of only Hafizh Syahrin.

However, Lorenzo said that he felt "quite well" during the day, and admitted his struggles were more down to his inexperience with the Honda, and his issues in the low-grip conditions of the Termas de Rio Hondo circuit.

"This afternoon I take some painkillers, a little bit better. We need probably one, two or three weeks to recover completely in both injuries, or almost completely.

"But [that] is not the real problem so far… It's more my inexperience with the bike together with a track that [I] never like.

"It's difficult for me because the grip of the tarmac is really bad, really slippery. I'm a rider who needs grip to take profit of the maximum potential of my riding, so I always struggle here.

"Together with my lack of experience with the bike, and these injuries make my life not so easy at the moment."

Lorenzo reported improvements regarding his position on the Honda since Qatar, and reckons he will be competitive when MotoGP arrives in Europe at Jerez.

"If before I had five to seven things I don't like about the position of the bike, now we improve most of it," he added. "There are only a couple of things that can be improved in the future, so I am better.

"We need to put together many things but already now, when I don't have experience, in good conditions like in Qatar first practice with good grip and everything, I can be in the front.

"I expect that when we go to Jerez I will be very competitive. These two races will be difficult for me but I'm gonna try to get the best result to get points and to get experience with the bike without crashing."