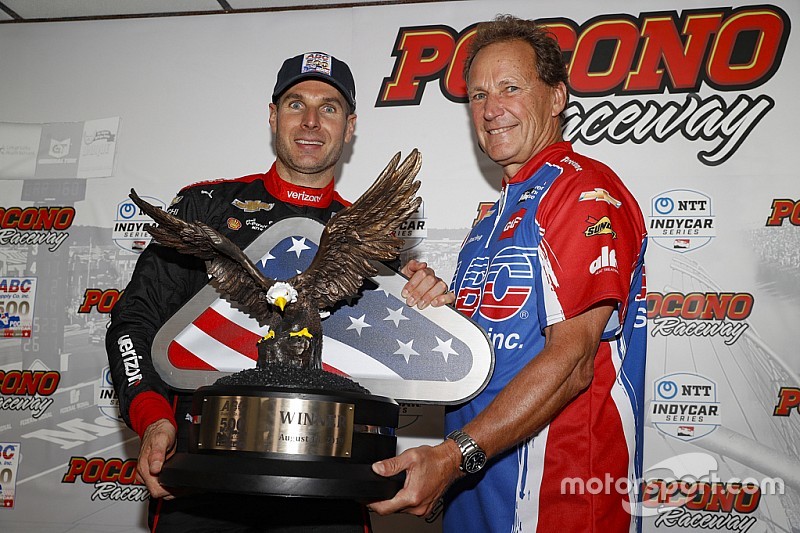 Team Penske-Chevrolet’s Will Power scored his first victory of the IndyCar season despite having two unlucky breaks to defeat Scott Dixon at Pocono Raceway, while a five-car shunt marred the start of the race.

With the grid arranged in championship order due to the qualifying rain-out, Josef Newgarden’s Team Penske-Chevrolet should have had the advantage, but he got jumped immediately by Indy 500-winning teammate Simon Pagenaud, while Andretti Autosport’s Alexander Rossi lost out to the third Penske of Power into Turn 1.

Then Chip Ganassi Racing-Honda’s Dixon passed Rossi down to Turn 2 and he was also drafted on either side by Ryan Hunter-Reay (inside) and Takuma Sato’s Rahal Letterman Lanigan Racing-Honda (outside). As this trio approached T2, Sato appeared to move left, squeezing Rossi down into Hunter-Reay. The three spun out of control, and the carnage sucked in James Hinchcliffe’s Arrow Schmidt Peterson Motorsports-Honda and rookie Felix Rosenqvist who had a scary ride along the top of the wall before coming to rest on track.

There were worries over Sato whose car ended the shunt upside down and on top of Hunter-Reay’s machine, but all drivers were relatively unharmed. Rossi would describe Sato’s move as disgraceful.

Dale Coyne Racing’s Santino Ferrucci, meanwhile, pulled off another great escape, similar to his Indy 500 accident avoidance and his Iowa Speedway multiple car pass. He emerged from Turn 2 on the outside and in fifth place, up from 13th on the grid, behind only the three Penskes and Dixon.

After the 45min red-flag delay, Power would not be able to restart from third place due to an air pressure sensor in one of his tires suggesting he had a deflation, perhaps due to running over debris. He pitted during the warm-up laps and would have to restart from near the back.

The first restart was waved off when Pagenaud went early, but next time by, on Lap 9, was clean. Dixon immediately went and jumped Newgarden before they were onto the front straight to tuck in behind Newgarden. Behind, Rahal got around Ferrucci for fourth, the pair chased by Pigot, Arrow SPM’s rookie Marcus Ericsson, Herta and Andretti Autosport’s Zach Veach.

Pagenaud and Dixon swiftly pulled a 1.2sec gap over Newgarden. Power hauled his way up to 12th behind Carpenter. By Lap 20, Dixon was 1.8sec clear of the chasing pack and saving fuel in Pagenaud’s wake, while the third Penske of Power was up into 11th behind Veach. That became 10th when Veach was the first to pit on Lap 29.

Ferrucci was the first of the frontrunners to stop, pulling out of fifth to stop on Lap 34, with Pigot and Carpenter stopping their ECR cars a lap later, Rahal, Bourdais and Ericsson on Lap 36.

Pagenaud was able to get to Lap 37 before pitting, despite ‘breaking the air’ up front throughout the first stint. Dixon stopped a lap later but Pagenaud easily beat him to regain the lead, while Ferrucci’s early stop had worked to perfection and he swept around the outside of Dixon following the stops! Newgarden’s late stop had not benefited him, losing out to not only Ferrucci but also Rahal and Bourdais.

Teammate Power got lucky and pitted last of the frontrunners, just before Pigot brought out the yellow flag by crashing into the Turn 1 wall. With the field at reduced speed, it meant he was able to rejoin in second, behind Pagenaud, but ahead of Ferrucci, Dixon, Rahal, Bourdais and Newgarden.

At the restart, Power took just one lap to draft past Pagenaud, but the Frenchman stayed easily in Power's wheeltracks. Meanwhile Dixon had gotten around Ferrucci for third, while Ericsson and Bourdais ran fifth and sixth, but Rahal dropped to 10th behind Newgarden, Carpenter and Herta. Herta would soon knock Carpenter back to ninth.

Power put up little defense when Pagenaud drafted back past to regain the lead, happy to run second and save fuel, half a second behind. Bourdais drafted past Ericsson on Lap 61, and the loss of momentum for the Arrow SPM driver cost him three more spots, to points leader Newgarden, Herta and Carpenter.

Bourdais, now up to fifth as a result of that slick maneuver on Ericsson, was still 4.3sec behind teammate Ferrucci who looked comfortable in the wake of Pagenaud, Power and Dixon. However, Bourdais then put in his fastest lap – a 212mph effort – and started closing in before pitting along with Ferrucci. Dixon stopped next time by, just as Pagenaud lost the lead to Power when caught up behind Hinchcliffe who had returned to the track 50 laps down.

Pagenaud lost momentum just before pitting – and further lost momentum in pitlane as he had to ease off the throttle to allow Marco Andretti into his pitbox – cost him more places to Dixon and Ferrucci.

However, Power would not be the beneficiary, despite now leading and running longer: a full course caution emerged for Herta shunting due to self-admitted driver error, which caused the pits to be closed. When the pits reopened, Power, the Carlin cars of Charlie Kimball and Conor Daly, and the AJ Foyt Racing-Chevrolet of Tony Kanaan dived in for service, leaving Dixon in front ahead of Ferrucci, Bourdais, Newgarden, Carpenter. That left Power, Kanaan, Kimball and Daly in seventh through 10th, ahead of Rahal, Ericsson and Veach.

On Lap 100, Dixon led Ferrucci by one second, with Pagenaud a similar distance back with Power half a second in arrears of his teammate. Carpenter ran fifth but 2sec behind Power, with Newgarden sixth until pitting on Lap 102. That moved to Kanaan and Bourdais up to sixth and seventh. Ferrucci and Carpenter pitted on Lap 105, Dixon pitting from the lead at the end of Lap 106, and Pagenaud on Lap 107. Pagenaud emerged ahead of Ferrucci and easily held him off to claim what would effectively be second.

Power left out in the lead came in on Lap 110 after setting some very fast laps equal to the fresh-tired speeds of the other leaders. That meant he emerged from the pits in second, ahead of the Pagenaud vs Ferrucci battle over third. On fresh tires, Power was fearsome, clicking off the race’s fastest lap – a 215.679mph – on his first flyer after pitting. That brought him onto the tail of Dixon and into Turn 1 he passed the Ganassi driver for the lead on Lap 115.

Despite the vagaries of traffic, Power pulled away from Dixon and within five laps he had a 3sec lead. On Lap 125, the lead was six seconds, and Dixon was starting to come under pressure from Pagenaud and Ferrucci.

Then on Lap 127, lightning in the area caused the race to be yellow-flagged and then red-flagged on Lap 128. The grim conditions with rain closing in persuaded IndyCar to call the race after 30 minutes of down time.

The win is Power’s 36th of his career, extends his streak of winning at least one race per season to 13 years, and is his third Pocono win four years.

No team orders at Ducati despite Aragon GP bust-up