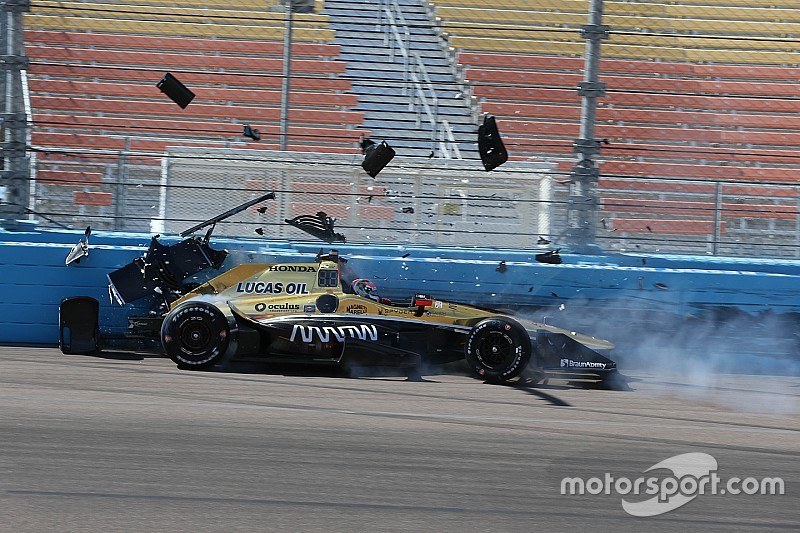 IndyCar’s new-for-2018 body kit for its Dallara IR-12-based machinery features “more robust” side-impact protection to prevent the pelvic injuries that have been suffered by its drivers in recent years.

Since the introduction of the Dallara IR-12 in 2012, the biggest issue has been serious injuries to the pelvis and hips, as well as upper and lower extremity areas.

The most serious of those type of injuries from the Dallara include: pelvic fractures and a small pulmonary contusion suffered by Justin Wilson at Auto Club Speedway in 2013 in a 125+G impact with the Turn 3 SAFER barrier that allowed an upright to puncture a hole through the tub.

Also James Hinchcliffe’s life-threatening pelvic-area injuries at the Indianapolis Motor Speedway in 2015, and the multiple pelvic fractures and a fractured right hip that were caused by Sebastien Bourdais’ 115+G impact with the Turn 2 SAFER barrier during qualifying for the 2017 Indianapolis 500.

“Yes, we tried to make sure we were very transparent through this whole process,” explained Jay Frye, IndyCar President of Operations and Competition, when asked if the serious injuries suffered by Hinchcliffe and Bourdais had any impact on the design of the new body kit.

“If you look at the two incidents you just mentioned, this driver side-impact protection device piece is a big part of this new kit.

With input from the drivers, IndyCar Director of Engineering Jeff Horton, IndyCar safety consultant and orthopedic surgeon Dr. Terry Trammell, and six years of experience with the current chassis, IndyCar went about improving side impact protection.

The result of that collaborative effort is a more robust and significantly improved crash structure that is eight to 10 inches wider at the driver’s hips.

The new body kit features: inlet ducts, side pods, and bottoms constructed from hybrid carbon/dyneema fibers to improve penetration protection, radiators moved forward to add more cushioning beside the driver, and a crushable structure ahed of the radiator created by a pair of bulkheads joining the leading edge and the inlet ducts.

Gallery: Check out the 2018 IndyCar design in the flesh

New IndyCar design for 2018 hits the track at Indianapolis