There was a clean start from the top six that immediately separated themselves from the pack, Josef Newgarden’s Team Penske-Chevrolet leading Scott Dixon and Helio Castroneves, while Felix Rosenqvist and Romain Grosjean both passed Simon Pagenaud – the highest starting driver on the harder Firestone primaries.

Everything stayed clean until the final hairpin, when Ed Jones in the Dale Coyne Racing with Vasser Sullivan dived up the inside of James Hinchcliffe and nudged the Arrow McLaren SP-Chevy of title aspirant Pato O’Ward into a spin.

That inevitably compressed the pack, Palou getting nudged by Ryan Hunter-Reay, who then had teammate Colton Herta hit his left rear, slashing it open and sending him to the pits. Another driver to lose out in this traffic jam was Will Power, who fell from 12th to 16th as he trickled past the stricken cars.

Then the yellow flew for a spin and stall for Sebastien Bourdais of AJ Foyt Racing, so as well as Hunter-Reay and O’Ward heading for the pits, so too did some of those who started toward the back, such as Graham Rahal (Rahal Letterman Lanigan), Max Chilton (Carlin) and Oliver Askew (RLL). Jones also visited the pits to serve the inevitable drive-through penalty.

The Lap 4 restart was clean, but at the start of Lap 5, Herta – up from 14th – drafted past Palou down the front straight. Not far ahead, Rosneqvist was desperately trying to separate Castroneves from third place, but his efforts allowed Grosjean onto his tail, and at the end of the back straight, on Lap 7 Rosenqvist cracked under the pressure, slid wide under braking, and Grosjean was through to fourth.

On Lap 10, Herta passed Pagenaud into Turn 1 despite a squeeze from the 2016 Long Beach winner and took sixth. However, he was reporting to his strategist and father Bryan Herta that he was feeling increasing vibrations from his right-front wing that had made contact with Hunter-Reay’s left-rear.

On Lap 17, the championship battle ended, O’Ward coming to a halt with a broken halfshaft, and he sauntered his crippled car down the straight, pulling over on the pitlane exit.

IndyCar delayed the caution/pits-closing, and while the majority of the leading cars pitted, Castroneves, Grosjean and Rosenqvist stayed out to fill the top three spots, ahead of the primary-tired trio of Takuma Sato (RLL), Scott McLaughlin (Penske) and Power.

The erstwhile leaders had emerged in the order of Newgarden still ahead of Dixon (both on blacks), separated from Herta, Hinchcliffe and Palou by the early stoppers Chilton and Askew.

As the yellow dragged on, Coyne brought in Grosjean, so Castroneves led Rosenqvist to the green at the start of Lap 25. There was one clear lap before Marcus Ericsson failed to negotiate Turn 1 while he had Alexander Rossi on his inside, and understeered into the tire wall.

The subsequent yellow saw Rosenqvist, McLaughlin and Power among those who pitted, but again Castroneves stayed out. For the restart he would lead the lapped and repaired car of Hunter-Reay to the green flag, while Rahal was second having made his last stop on Lap 1. Behind them were Newgarden, Dixon, Herta, Hinchcliffe, Palou, Pagenaud, Rossi and Grosjean. Rosenqvist, Sato, Power and McLaughlin were down in 16th-19th. 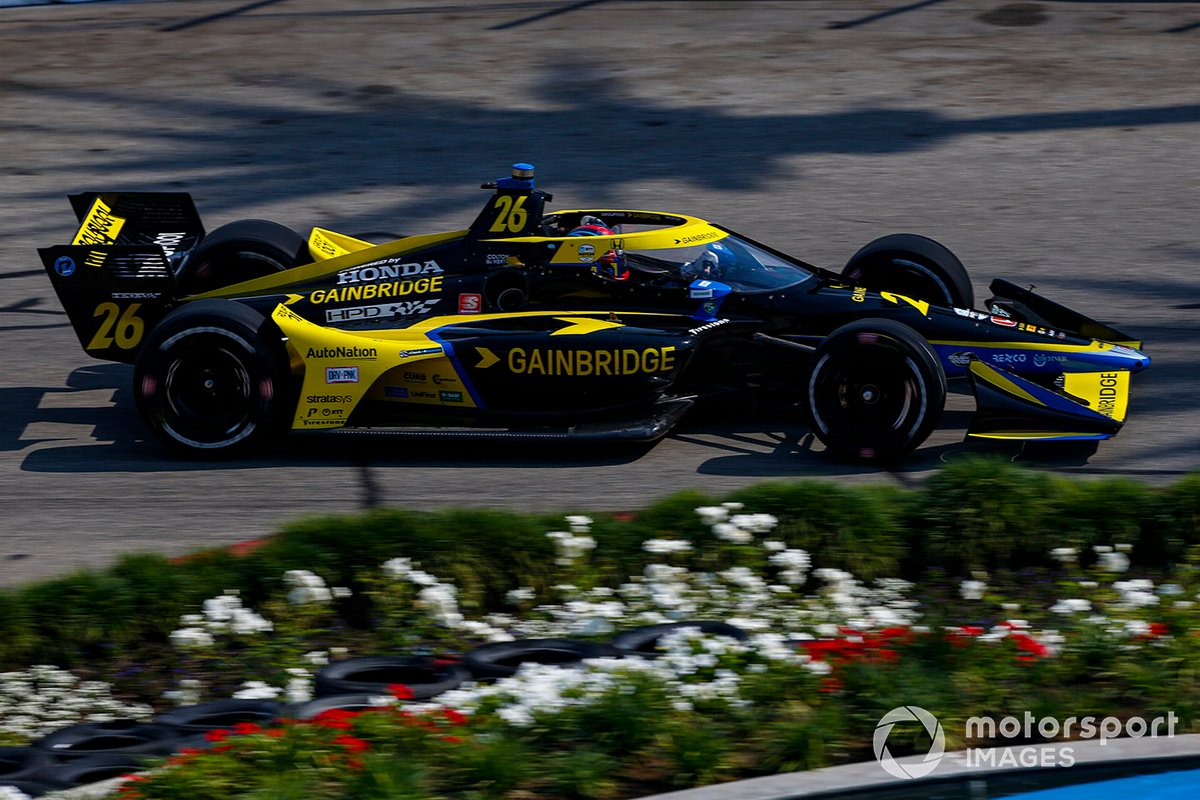 The Lap 31 restart saw Castroneves easily hold on up front, while Herta took advantage of being on reds to dive down the inside of primary-tired Dixon at Turn 6 to take fourth and zoom onto the tail of Newgarden. On Lap 32, he passed the Penske driver into Turn 9 and grabbed third.

Both Castroneves and Rahal pitted on Lap 34 in response to Callum Ilott spinning into a runoff zone, but Race Control elected to respond only with a local caution.

So Herta was now in the lead – already four seconds ahead of Newgarden and Dixon, with Hinchcliffe fourth and Palou fifth, occasionally having to defend from Pagenaud.

On Lap 41, Power passed Rosenqvist into Turn 1 to claim 14th and then also got past his pal Sato to take 13th. That put him onto the tail of Rinus VeeKay’s Ed Carpenter Racing-Chevy which had just been demoted by Jones and Meyer Shank car of Harvey.

On Lap 44, Grosjean passed one of his 2022 teammates Rossi for seventh in a long maneuver that went from Turn 1 through to Turn 3.

By Lap 50, Herta had pulled an 8sec advantage over the Newgarden/Dixon battle, while within a second of them was Hinchcliffe, working hard to keep Palou in his mirrors, as Pagenaud on reds closed in on them.

Hunter-Reay’s troubles weren’t over in his final Andretti Autosport drive, as he pitted with broken bodywork rubbing on his left-rear. Meanwhile Hinchcliffe, had to defend all down the front straight from Palou on Lap 51, as the champion-elect saw Pagenaud filling his mirrors once more.

That pressure lifted on Lap 53, as Pagenaud and teammate Power ducked into the pits for reds, and the following lap Herta pulled in for primaries.

That triggered the next round of stops and the #10 Ganassi crew did a superb job to get Palou out just in front of Hinchcliffe, who then was demoted into the Fountain Turn by the warm-tired Pagenaud, who also passed Grosjean at Turn 8. That same corner would claim him a lap later, as he bent his left-rear toelink against the wall.

The off-strategy RLL cars of Oliver Askew and Graham Rahal sat up front for a few laps, but Herta had an 11sec margin over Newgarden…

Until Lap 62, when out came the caution flags. Askew had just pitted from the lead, but he and Conor Daly collided at the end of the back straight, Daly’s ECR-Chevy skating into the runoff and Askew’s RLL machine ending up in the tires.

That ruined Rahal’s race, since he would stop under yellow, and find everyone on the lead lap restarting ahead of him.

It also meant Herta would have to be on the defensive on the restart using Firestone primaries that take longer to come up to temperature than the reds of Newgarden and Dixon now right behind him. Herta was well aware of this and erupted out of Turn 9 to make sure he had a strong lead onto the front straight on Lap 65.

Herta wasn’t able to pull more than a second clear of Newgarden until Lap 76, while Newgarden continued to check his mirrors for Dixon. Palou sat in fourth, containing his exuberance, eight-tenths behind his six-time champion teammate and a second ahead of Pagenaud who had a similar margin over Rossi. Harvey ran seventh ahead of Bourdais, Sato, Power and McLaughlin, the last pair having demoted Ed Jones to 12th.

Newgarden appeared to have redoubled his efforts into the last five laps and started filling Herta’s mirrors. Onboards showed Herta struggling to get his power down out of the final hairpin.

But the man who should have started from pole held on masterfully to beat the man who did start from pole, beating him by 0.5883sec, with Dixon only 0.4869sec further back.

And within 2.5sec of the winner was Palou, the new and deserving champion of IndyCar – 38 points over new second-place man, Newgarden, as O’Ward slipped to third, just ahead of Dixon.

Ericsson's demise and Herta's sixth victory meant the Andretti Autosport driver moved up to fifth in the championship.

Champion Palou: “Let’s get another one now!”