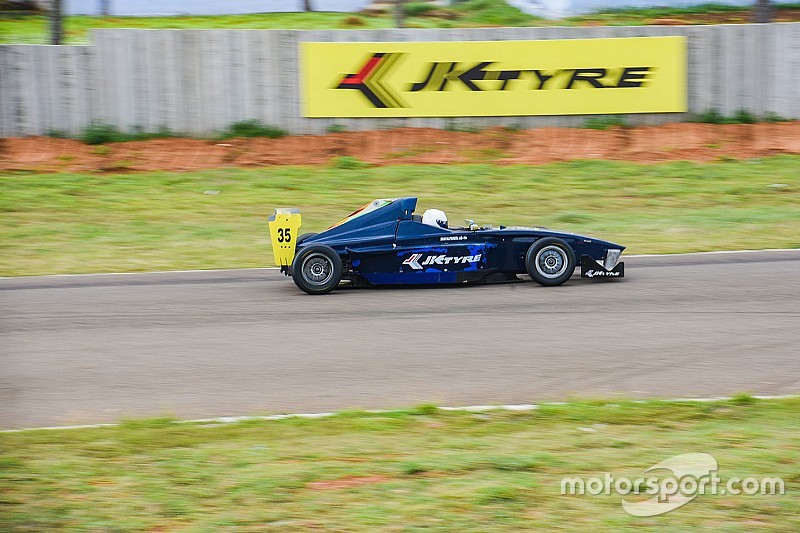 Sri Lankan driver Bryan Perera ended the second round of JK Tyre National Racing Championship in Coimbatore with a fine victory on Sunday.

Nirmal Uma Shankar started the reverse grid Race 4 from pole position but nearly stalled on the grid, allowing almost the entire field to pass him before turn 1.

It was Perera who inherited the lead due to Uma Shankar’s troubled start and after resisting early pressure from Yash Aradhya, he cruised to a comfortable win.

Aradhya, meanwhile, started coming under pressure from Karthik Tharani and the two were indulged in a thrilling battle for nearly the entirety of the race.

With three laps to go, Tharani dived down the inside into turn 1 but lost momentum, becoming vulnerable to Ashwin Datta.

Datta managed to slip past him later in the lap and Nayan Chatterjee followed him under braking into turn 1 on the following tour.

With Aradhya handed a 10-second penalty for a jump start, Datta inherited second and Chatterjee completed the podium spots.

The latter was forced to start 10th on the grid after incurring a five-place penalty for an engine change, but put on a charging drive to lose as little ground as possible in the championship fight.

Meanwhile, Tharani wound up in fourth, ahead of Sudarshan Rao and the aforementioned Aradhya. Singh finished seventh once again, while Manav Sharma, Mira Erda and Chetan Korada completed the top 10.

Uma Shankar was the only retiree from the race, the polesitter crashing out a few laps later after his terrible start.