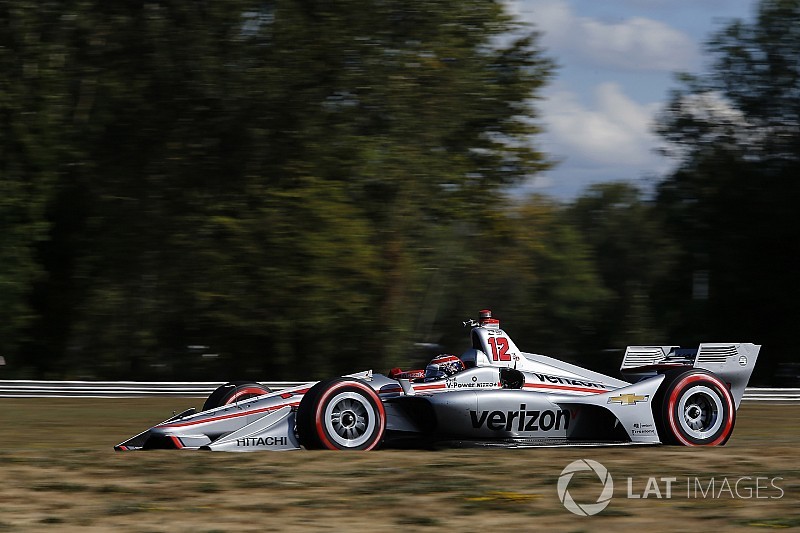 Will Power scored his fourth pole position of the season, the 54th of his career, and Josef Newgarden made it a Team Penske-Chevrolet front-row lockout, as points leader Scott Dixon could only muster a sixth-row start.

Power, who has now edged ahead of AJ Foyt in IndyCar’s all-time pole-winning stakes, was a startling 0.3410sec faster than Newgarden on a sub-one-minute lap, while Alexander Rossi proved the fastest of the Andretti Autosport-Hondas, taking third place, just 0.05sec behind Newgarden.

The Dale Coyne Racing with Vasser-Sullivan team deserved a huge congratulations for their rebuild efforts after Sebastien Bourdais had a 130mph spin off the track at Turn 9 in morning practice. The repaired car was set up well enough to allow the 2007 Portland winner to claim fourth, ahead of two more Andretti cars, those of Ryan Hunter-Reay and impressive rookie Zach Veach.

James Hinchcliffe will roll off seventh fastest alongside Chip Ganassi Racing-Honda’s Ed Jones, who outqualified teammate Dixon for only the fifth time this season.

Marco Andretti was ninth and slowest of the Andretti Autosport quartet, the only AA car to fail to graduate to the Firestone Fast Six. It was a disappointing outcome given that the Andretti-Herta #98 has been so strong this so far this week. Graham Rahal outpaced Dixon who said the car felt too loose on blacks and then got held up by another car on what was supposed to be his fastest lap. He will start alongside the faster of the two Ed Carpenter Racing cars, that of Jordan King.

Jack Harvey was unable to make it through from Q1 Group 1, in Meyer Shank Racing’s first race since the Mid-Ohio event, but will start 13th.

Substitute for injured Robert Wickens, Carlos Munoz – in his first event driving an IndyCar with the 2018 aerokit on a road course – will start an impressive 14th, only 0.0768sec off Schmidt Peterson Motorsports-Honda teammate Hinchcliffe in the same session.

Dale Coyne Racing’s Pietro Fittipaldi went out straight away on reds, and while he didn’t escape Q1, he did outqualify temporary teammate and fellow rookie Santino Ferrucci, who nonetheless performed admirably to outqualify 2017 Indy 500 winner Takuma Sato in the second RLLR car.

Gabby Chaves was disappointed with 21st, with Harding Racing-Chevrolet having looked strong in testing and in the mid-teens during practice. However, he has outqualified a Penske, as Simon Pagenaud’s struggles were highlighted in Q1 – almost 0.9sec slower than Power’s best in the same session.