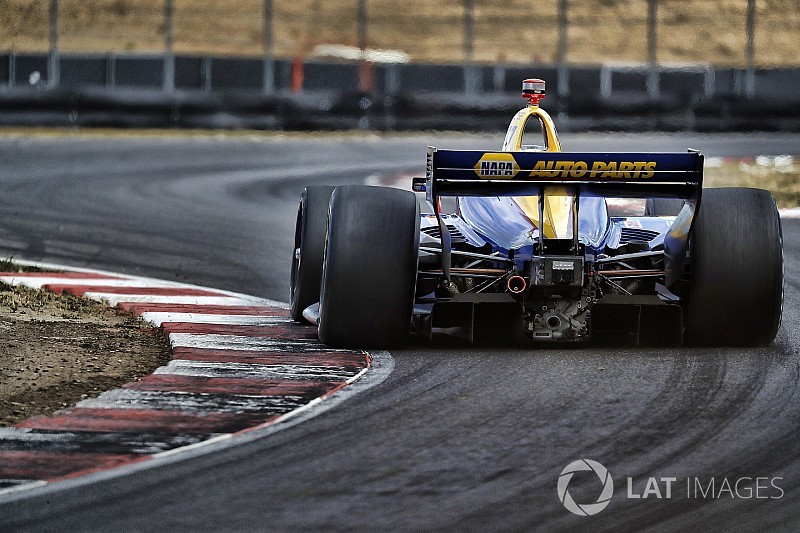 The Team Penske drivers and Andretti Autosport drivers say that the Portland International Raceway has accentuated the different setup requirements within the team.

Josef Newgarden admitted he and polesitting teammate Will Power have gone in different directions – with Simon Pagenaud having his own separate struggles – while Alexander Rossi said it had been a similar case for himself and his teammates.

“I think Will, where he's developed his setup for the weekend, has naturally been better for the reds [softer-compound Firestones]. We've probably been naturally a little bit better on the black [primary] compound tires.
“Just depends where you go. You get some tradeoffs. I like this setup style we've got. Didn't seem to work as well on reds.

“We're all on three completely different setups. I don't think we've ever been like this. I don't know if that's a trait of this track. Andretti [Autosport] may be the same way.

Newgarden also through a morsel of comfort for his other teammate Pagenaud, who has struggled all weekend to run his car loose enough to be quick, and will start 22nd

“I think Pagenaud has some things he dislikes that he's trying to find,” said the reigning champion. “We've all had that at some point this year. I've been places where I am looking for something I need, so has Will. We all go through that at some point or another.”

Rossi, who goes into the race second in the championship standings, 26 points behind Chip Ganassi Racing’s Scott Dixon, who starts 11th, commented: “I think all four of the cars have been competitive. Marco really has led the way for a lot of the weekend in terms of Andretti Autosport. We've all worked together.

“[But] similar to Josef, I think we're all kind of on our own independent island in terms of setup, which is very unique for this place. It’s presented a challenge. We're all very thankful for the test we had on Thursday.”

Like Rossi, Hunter-Reay admitted he leant on Andretti for setup help, and heaped praised on rookie Veach, who reached the Firestone Fast Six for the first time this year.

“Marco has been fast all weekend, so we worked with him a bit trying to get the right setup on the car for today,” said the 2012 series champion “and it definitely gave me what I needed and that was nice. We just need to put our heads together now and try to figure out what we are going to do for the race. It’s going to be completely different.

“Zach did a really great job. I’m really proud of the kid. If you got to see some of the data traces and what he is doing, he’s really committed, super-committed. Some of the sessions that are really, really hairy and could have huge consequences, he’s sometimes the best – it’s cool to see that. He’s done a really good job and he’s a great teammate.”