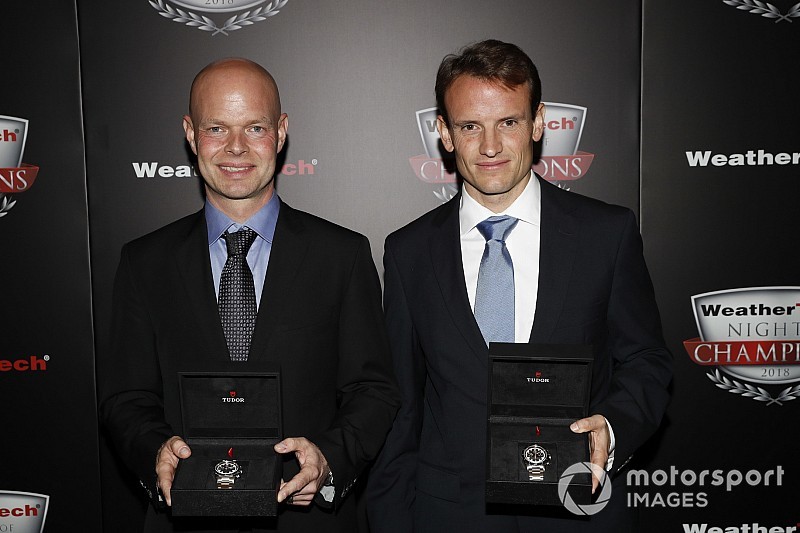 Motorsport.com columnist Jan Magnussen on a season finale that saw Corvette Racing dig deep, hard and swiftly to get his and Antonio Garcia’s championship aspirations back on track.

We did it! Antonio Garcia and I are IMSA WeatherTech SportsCar champions for the second year in a row! But while it is Antonio and my name in the record book, when I say ‘we’, I really mean everybody at Corvette Racing.

To say it wasn't easy would be an understatement, even in the last two hours of Road Atlanta's Motul Petit Le Mans, we weren't sure it was going to happen.

With two and a half hours to go, our #3 Corvette C7.R made contact with a wall and, honestly, I was worried it was over. The #67 Ford needed to finish third or worse if something happened to us, and they were running second at the time.

But, this crew is just amazing. The Corvette Racing team brought the car to the garage and fixed everything unbelievably fast. They changed the engine floor, fender, nose and more and the total pit-in to pit-out time was five minutes and 30 seconds!

We always say that the Corvette Racing team is the best in the business, but I think after this weekend everyone else will be saying it too. The guys and girls on this team are why we wanted this title so badly, and I'm so glad we won it for them.

After the incident, we were ninth in the order, and the Ford was leading, so it didn't look good. But we moved forward and passed the Ferrari, putting us in eighth, and the Ford began to fall back. At the flag, we finished eighth and they were fifth. It wasn't pretty, but it was enough to win the title for Corvette and Chevrolet.

The other brilliant thing about Corvette Racing is we work as a team. Great work in the pits got the #4 Corvette out in front of the Ford late in the race and Oliver [Gavin] and Tommy [Milner] did their utmost to help us in any way they could.

Corvette Racing has now won three championships in a row: Oli and Tommy won three years ago and now it’s two-in-a-row for Antonio and myself.

What makes us even more proud is we’ve won against incredible opposition. The Ford GT guys are proven race winners, Porsche is always tough wherever it races anywhere in the world, and the BMW team has really stepped it up this year with its new car.

Even if we hadn't held on for the championship, it was still an amazing day. To honor the late Dr. Don Panoz, I got to drive the 1998 Panoz GTR-1 before the race. It was the first sports car I ever drove, at the first track I ever drove it, and it was an incredible tribute to the man that gave me my start in American sports car racing.

On top of that, my family was at the track that weekend. Celebrating with Christina and my kids, Kevin, Luca, and Millie, made the weekend so much more special. Kevin hasn't seen me race in the U.S. for a number of years, so to have him at the track meant it was going to be a good weekend no matter what the result was. He has seen the Corvette Racing guys in action before, and he knew they were good, but he came away from weekend massively impressed.

But, winning and celebrating that win with family – including the Corvette family – is really what this sport is all about.

Kevin himself had a pretty strong race last weekend in Texas but sadly lost out on his points for the ninth-place finish for a fuel usage violation.

I know that is only going to make him even more determined this weekend in Mexico.