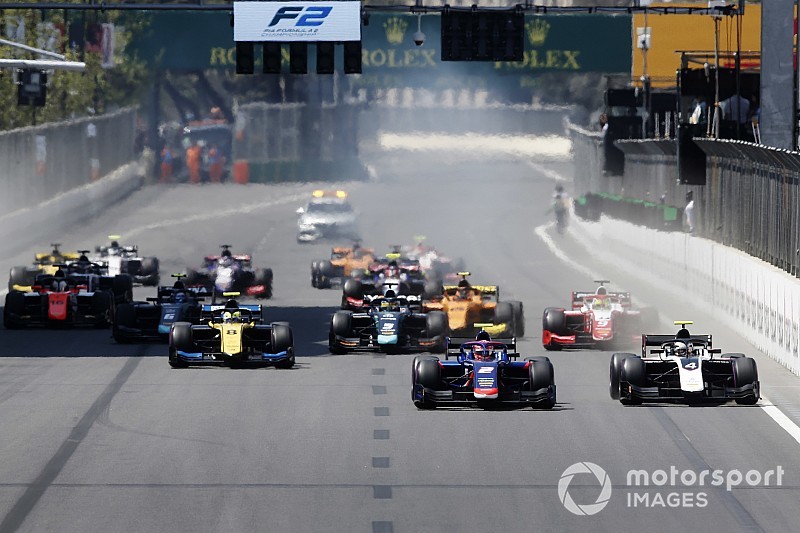 The McLaren protege was speaking after finishing second behind Jack Aitken in a race in which there were two safety car periods and two collisions down the field during the restart of the latter caution, triggered by a crash for Guan Yu Zhou.

First Luca Ghiotto ploughed into the rear of Sergio Sette Camara, eliminating the latter from the race, while further behind Louis Deletraz came to blows with Dorian Boccolacci's car.

De Vries was leading the field when the first safety car was deployed, but took full advantage of the new rule forbidding overtakes before the start-finish line, as he kept the pack bunched up for as long as possible and protected his lead heading into Turn 1.

The Dutchman then lost out due to a slow pitstop, handing the advantage to Aitken, and speaking in the post-race press conference he put the incidents down to other drivers not realising that the safety car restart rules had changed.

"First it’s worrying that most people didn’t even realise the regulations have changed, and the SC restart is done from the control [finish] line now, instead of safety car line 1," said de Vries.

"After the [drivers'] briefing there were a few people who were surprised hearing that. That was one of the issues, because everyone was expecting the leaders to start ahead of safety car line 1. In fact we were waiting to approach the control finish line to reduce the effect of the slipstream.

"Second, [because] conditions are still quite cold here, you lose [tyre] temperature quite quick, you could almost allow the rule which is applicable in Macau, the very tight hairpin [Melco], attacking in Turn 1 is not allowed because it’s really asking for trouble.

"If you’re at the front you’ve just got to be sensible. I’ve made a mistake before [he took out George Russell at the same corner in last year's Baku feature race], so I’ve learned at least today. You’ve got to stay behind and start your race from Turn 2 onwards.”

Pressed on whether he was certain his rivals were not aware of the rule change, the Dutchman added: "I’m certain if you asked people ahead of the race, where is the safety car restart, a lot of people would reply ‘safety car line 1’.

"The regulations changed this year, and it’s quite new. In Bahrain the chances of a safety car are quite low so people didn’t experience it, so I’m certain people were not aware of that rule change.”

Third-place finisher Jordan King interjected: "If Nyck and I in the briefing hadn’t mentioned it, there definitely would have been three or four drivers steaming past everybody into Turn 1!”

De Vries then concluded by saying: “That’s why we get crashes and people becoming a victim of other people’s poor knowledge.”

MP Motorsport driver King escaped contact when he was hit from the rear by the Arden machine of Anthoine Hubert, having slowed down to avoid Ghiotto and Sette Camara's incident.

He recalled: "The two cars in front [Ghiotto and Sette Camara] collided, spun into the wall. I stopped to avoid it and the car behind [Hubert] ploughed into me, so I actually thought I had a puncture for a period of time straight after that.

"I tried to stay clean but I still had three or four bits of contact from behind, so it’s a bit out of your hands. If you’re in Jack’s position at the front it’s a bit nicer."