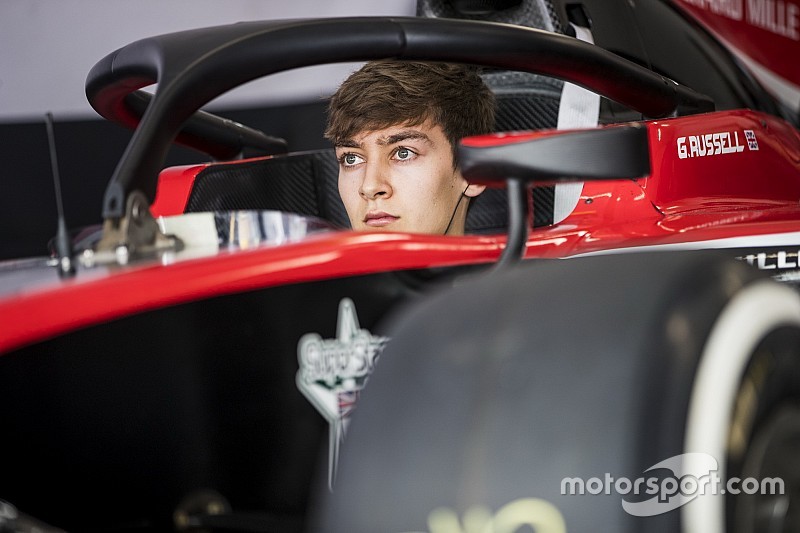 Mercedes Formula 1 junior George Russell has hit out at Nyck de Vries for a “completely stupid” passing attempt for the lead in the F2 feature race in Baku.

Russell had been on course for a comfortable maiden F2 win on the streets of the Azerbaijan capital, having pulled out a five-second lead over de Vries before a crash for Roy Nissany brought out the safety car and bunched the field up.

At the restart, Russell went on the defensive against de Vries, braking late and running wide at Turn 1, but the Prema driver dived up the inside and locked up, blocking Russell’s path as the ART man turned in to recover his line.

The result was that Russell plummeted out of the points, finishing 12th, while Alexander Albon was able to secure a maiden F2 win after passing Antonio Fuoco, who inherited the lead at the restart.

“The speed is higher than normal, there’s a lot of slipstreaming, and there’s a big braking zone, and a lot of people just misjudged it,” Russell told Motorsport.com.

“You saw de Vries going for the overtake on the inside, which was completely stupid really, considering I was already defending, and it’s a street circuit with no grip there.

“I braked a bit deep, no doubt, but I knew there’s a good run-off there and I was happy to brake deep. Just de Vries behind me braked even deeper, but I was already on the limit.

“He completely misjudged it, and you saw the consequences. I’m very confident I would’ve made the corner if he wasn’t there.”

For his part, de Vries admitted he wanted victory “a bit too much” when he made the lunge on Russell.

“Obviously the safety car brought the whole field together, and I had a good [re]start,” recalled the Dutchman, who ultimately retired with damaged suspension.

“I was in [Russell’s] slipstream, and I think I wanted [it] a bit too much, tyres and brakes were not ready for it, I locked up, went straight and that was it.”

Despite failing to score, Russell added he was “proud” of his performance, having set a fastest lap a second quicker than any of his rivals.

“I’m extremely disappointed, but we were considerably faster than everybody else,” he said. “I feel very proud of myself and the team of what we did in that race.

“We lost 27 points today, but it’s all up for grabs again tomorrow. We’ve got the pace to win, so let’s stay out of trouble and see what we can do.”