Louis Deletraz has hit out at the "ridiculous" restart tactics seen in Formula 2's feature race in Baku, saying drivers shouldn't be allowed to weave and brake hard on the main straight.

Carlin driver Deletraz retired while fighting in the points after he hit the back of Dorian Boccolacci's Campos car during the second safety car restart.

His accident was a consequence of Luca Ghiotto spinning Sergio Sette Camara around, causing the pack behind the duo to bunch up.

Chaotic restarts are not unprecedented in Baku as Nobuharu Matsushita's hectic braking out front caused drivers to crash behind him in the inaugural weekend in 2016, for which the Japanese driver received a one-round ban.

Deletraz called the restarts in this year's feature race "ridiculous", and said that it shouldn't be permitted for drivers to weave so much and for the leader to keep the field bunched up with hard braking.

"The race was going alright, it was more about being safe because Baku is Baku, we all know it," the newly-recruited Haas F1 simulator driver told Motorsport.com.

"We were actually eighth at this moment, I think, and quite in good shape because coming back on the cars ahead, and then those safety car restarts were ridiculous, honestly.

"They just accelerate, brake, accelerate, brake and crash together. We are just behind it, we cannot avoid. I think the four cars in front just spread out and then I was left with nowhere to go.

"The DAMS [Sette Camara] spun then everyone behind brakes and I saw [Jordan] King, then everyone spreads around him and when you come behind, what can you do? Nothing. There is just no more room anywhere."

Deletraz added that the rules should prevent drivers from weaving, as well as the lead driver from wary up their speed so much.

"It shouldn't be allowed to weave that much because the only reason they contact is because they are weaving and they touch wheels," he continued.

Sette Camara, the other victim of the safety car restart, said that his collision with Ghiotto was not his fault as the "guy behind has to control the situation".

The McLaren junior driver added that the restart was "very confusing" and that race leader Jack Aitken was going overly slowly.

He told Motorsport.com: "In my view, I don’t think I was the one to blame for that one. I was looking at the car ahead, if he brakes I need to be in full control of the situation to not smash the guy ahead.

"While I was weaving and looking for the leader and everything, my rear wheel touched the front wheel of Luca. The guy behind has to control the situation as he has the view.

"Everyone was searching for temperature. Aitken was going quite slow, so everyone is trying to weave and brake, otherwise it’s more dangerous as everyone would arrive in Turn 1 locking up the brakes.

"If you look at the video, the moment of strong weaving was already passed. I was fully focussed to be ready to go on power when the leader went on power, so I think it was Luca being on a strange place on the track [that caused the crash].

"Many times I thought ‘he’s going for it, he’s not going for it’. In a moment like this, it’s probably when Luca did the mistake. It was not so dramatic. I think his concentration dropped for one moment." 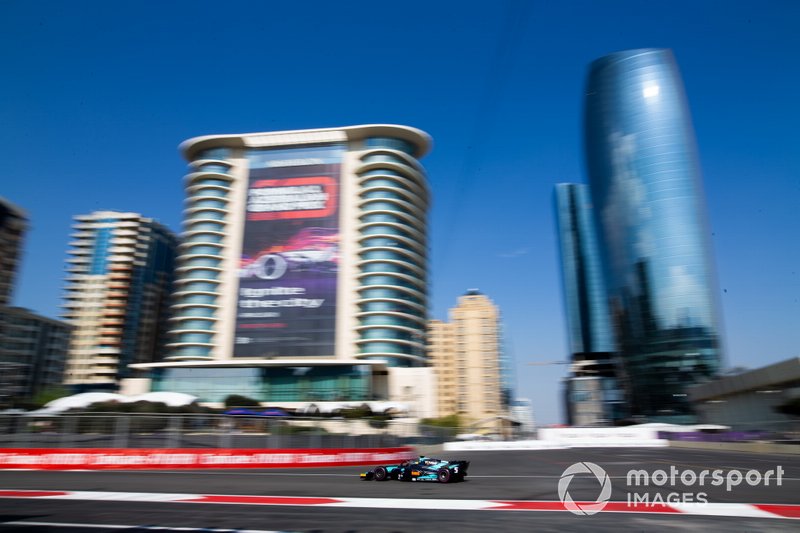