Back to the precious Ring

July is a busy month for the GP2 Series drivers. Two weeks ago at a rain-hit Silverstone, Luiz Razia claimed back control of the Series after another strong weekend in Great Britain which saw the mighty Brazilian collect yet another win – that’s four this season. Davide Valsecchi did well to recover from a disastrous qualifying result in style with a podium finish in the Sprint Race but it was simply not enough to keep the lead and stop Razia from shining. Both men will be ones to watch again this weekend in Germany as they will battle on track for more points and ultimate glory, unless Esteban Gutiérrez swoops in and steals the show. The Mexican has pocketed two Feature Race wins back-to-back and will definitely be hoping for a hat trick, but he has been handed a place grid position penalty for this weekend and will have to fight even harder.

This week marks the return of GP2 to Hockenheim. It will be the first time that Caterham Racing and Carlin will race on that track with the Series, but it will also be the first time that all drivers will race on Pirelli tyres at Hockenheimring. The German circuit is not especially aggressive on tyres and the most important thing is to have compounds that are adaptable to a wide range of conditions, especially given the fact that weather conditions in the local area can be changeable at this time of year. 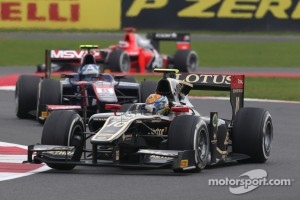 There is not expected to be a very large variation in performance between the two compounds selected (Medium and Soft) under equal conditions, so it will be vital for the teams to understand fully the performance and degradation data to plan an effective strategy. The extra set of soft tyres should give them the additional running to capture all the information they need.

Pirelli’s racing manager Mario Isola said: “Hockenheim will be a new experience for us with GP2 and we need to keep an open mind as to what to expect, particularly in terms of weather conditions. The German circuit does not make any particular demands on the compound and structure in a specific area, but instead there are quite a wide range of different parameters that are tested. Traction is certainly a key issue, because of all the slow to medium speed corners, but the tyres also have to withstand sustained high speed on the long straights and heavy braking. After the weather in Silverstone meant that the GP2 drivers were not able to take advantage of the new tyre regulations, it will be very interesting to see what they can do in Germany.” 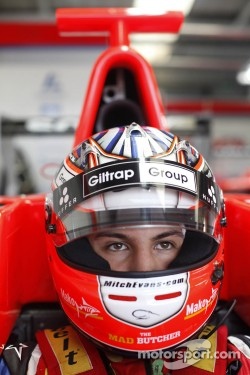 Half Time in Hockenheim for GP3

Four rounds gone, four to go! GP3 Series is back and this time the venue is the mighty Hockenheimring. 2011 saw Nurburgring play host to GP3 but now Hockenheim returns to the calendar for the start of back to back races with Budapest – Round 6 in less than seven days time.

Round 4 took place in rainy Silverstone and what an eventful weekend it was! Antonio Felix Da Costa grabbed his first win of the year which was also Carlin’s maiden victory in the GP3 Series! Race 2 was one of the most dramatic and thrilling races we have had in the Series’ history with William Buller celebrating his debut win after starting from 25th and last on the grid to come through the pack! A race which was dominated by strategic calls with changeable weather conditions, favoured the brave and it was Buller who made his slicks work to claw his way through the field. It also marked a double win for Carlin on home ground in front of a packed house at Silverstone.

With half the season completed, Mitch Evans (MW Arden) controls the Drivers Standings with an 11 point advantage to Aaro Vainio (Lotus GP). There is a titanic tussle between the duo for the title but it will be a challenge this weekend for the Finn as he’s been handed a ten place grid penalty for Race 1 following an incident in Silverstone. The charge is also on from behind with Felix Da Costa collecting vital points in an attempt to stamp his claim on the Series to catch the two at the top.

A familiar face returns this weekend in Lewis Williamson who will be deputising for Kotaro Sakurai (sponsorship problems) at Status Grand Prix. The Scotsman finish eighth in the GP3 Standings in 2011 so will be looking to impress in Germany. Once again, the weather looks unpredictable for Round 5, so it promises to be another thrilling encounter!

Racing Engineering is ready for the challenge of Hockenheim.

Would the 'Super-GP2' proposal in F1 work?