Sebastian Vettel said losing the 2018 Formula 1 world championship to Lewis Hamilton in the Mexican Grand Prix was "a horrible moment" even though he knew it was inevitable.

By:
Matt Beer
Listen to this article

Vettel needed to win at Mexico City with Hamilton eighth or lower in order to keep the F1 title battle alive.

Though the Ferrari driver beat his rival on the day - finishing second as Mercedes struggled and Hamilton came home fourth - it was not enough to prolong the championship fight.

"It's a horrible moment," Vettel admitted.

"You put a lot of work in and even if you saw it coming - I did pay attention in maths so I could do the numbers - you hang in there as long as you can.

"Three times now in my life I've had that sort of disappointment where you realise one day that you can't win the championship anymore and those are not happy days.

"You reflect on not one moment, but the whole year and the work that goes in, the effort that goes in from the end of last year until now.

"We had our chances, we used most of them. Maybe some we did not. But in the end we were not good enough."

Vettel broke off his post-race interview on the track to go to congratulate Hamilton on his fifth world championship.

"He drove superbly all year," said Vettel of his opponent. "He was the better one of us two.

"I told him it was well deserved and to enjoy it. Number five, I think it's something incredible.

"So I mainly congratulated him and asked him to keep pushing for next year and said I'll do my best to fight him again."

Vettel started only fourth in Mexico, and briefly dropped to fifth behind Hamilton's teammate Valtteri Bottas on the first lap, but gained ground by running long in his first stint.

He then passed both Daniel Ricciardo and Hamilton on track before trying in vain to chase down leader Max Verstappen.

"In the beginning I couldn't go at the pace. The first couple of laps obviously I was in the pack, so it was very difficult," Vettel explained.

"Then I sat back a little bit and wanted to go a bit longer, which worked well.

"It gave us the advantage in the second stint. I was a bit surprised when others pitted and how much they dropped off.

"For me it was not so much of a problem, maybe because I saved more in the beginning.

"After that we had very good pace and at the end of the first stint we were also a little bit faster than Max.

"In the second stint obviously we had a different goal and I had to go through two cars, which we managed to do, and then from there it was very far to Max and we had nothing to lose." 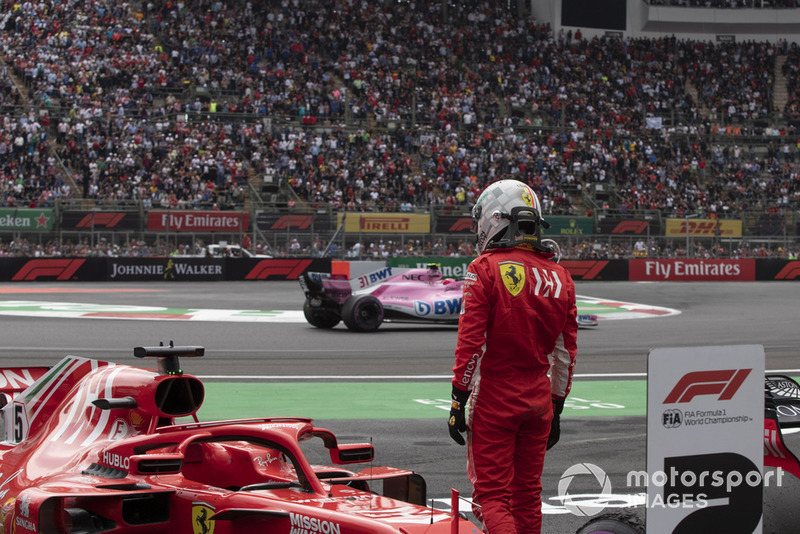