Verstappen: 'No shock' to trail Hamilton after F1 engine change

Max Verstappen felt it was “not a big shock” to trail Formula 1 title rival Lewis Hamilton in qualifying for the Brazilian Grand Prix after the Mercedes driver took a new engine.

Championship leader Verstappen was tipped to be the pace-setter at Interlagos after taking back-to-back wins in the United States and Mexico, with Hamilton saying the fight against Red Bull would be "as steep as it can be".

Mercedes confirmed ahead of opening practice on Friday morning that it would be taking a fresh engine for Hamilton ahead of the weekend, resigning him to a five-place grid penalty.

But Mercedes then turned the tables on Red Bull in Friday's qualifying session to set the grid for the sprint race as Hamilton topped all three sessions, beating Verstappen by four tenths of a second in Q3.

Speaking in parc ferme after qualifying, Verstappen felt it was not a surprise that he had lost out to Hamilton after Mercedes' engine change.

"When they take a new engine, actually they have a bit more power for a weekend, so for me it's not a big shock," Verstappen said.

"I'm just happy to be second. That's a good position to start from. Of course you always want to be closer, but sometimes you just have to be realistic, and there was not much more in it." 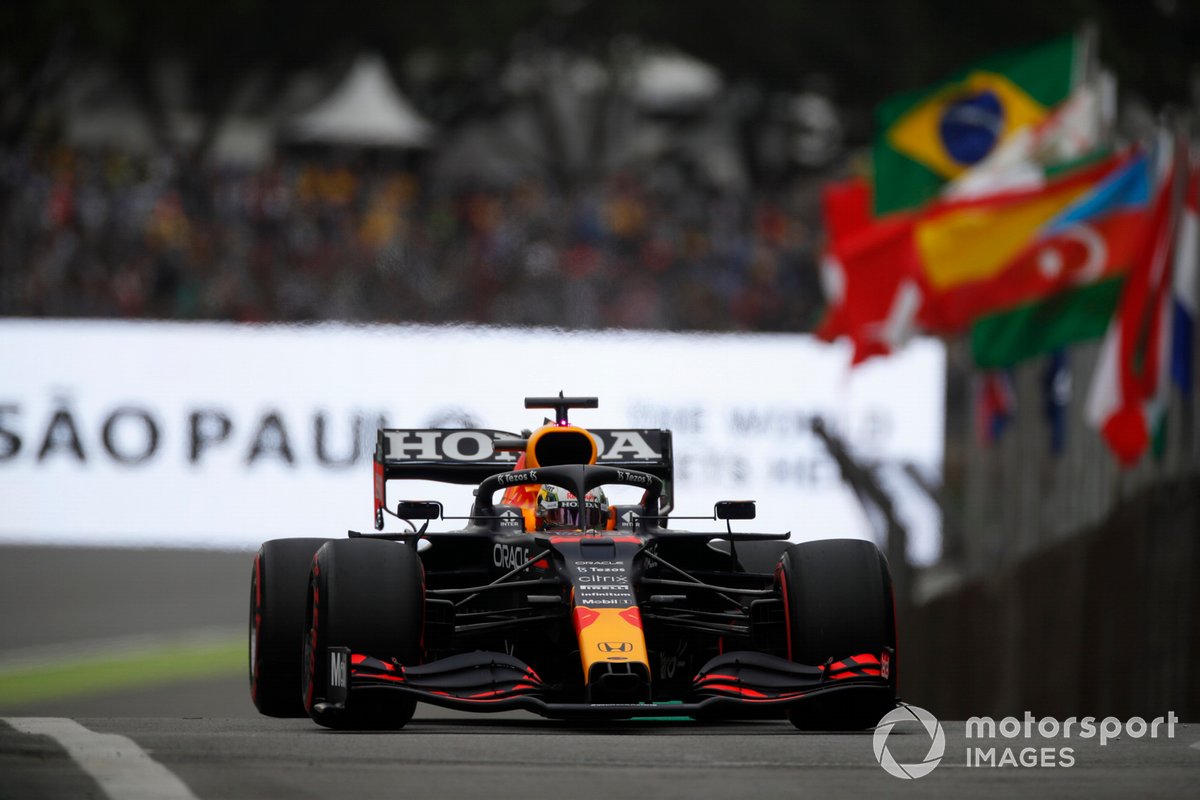 Verstappen rued a mistake at the penultimate corner on his final Q3 lap, but had been trailing Hamilton by three tenths of a second at the second sector split before an eventual gap of 0.438 seconds.

Hamilton will not take his five-place grid penalty until Sunday's race, meaning he will start the 24-lap sprint race from the front of the grid, with three points on offer to the winner.

Asked if he was focusing on damage limitation against Hamilton on Saturday ahead of the penalty being applied, Verstappen replied: "I mean there are not that many points of course to gain in the sprint race.

"So I hope of course to have a good first lap and see from there. Then of course, the most important one is on Sunday."

Verstappen believed his Red Bull F1 car would "be completely different" in race trim on Sunday as "it's going to be a lot warmer" after overcast and cool conditions for qualifying.

"That will change the behaviour of the car as well, so we'll see," Verstappen said.