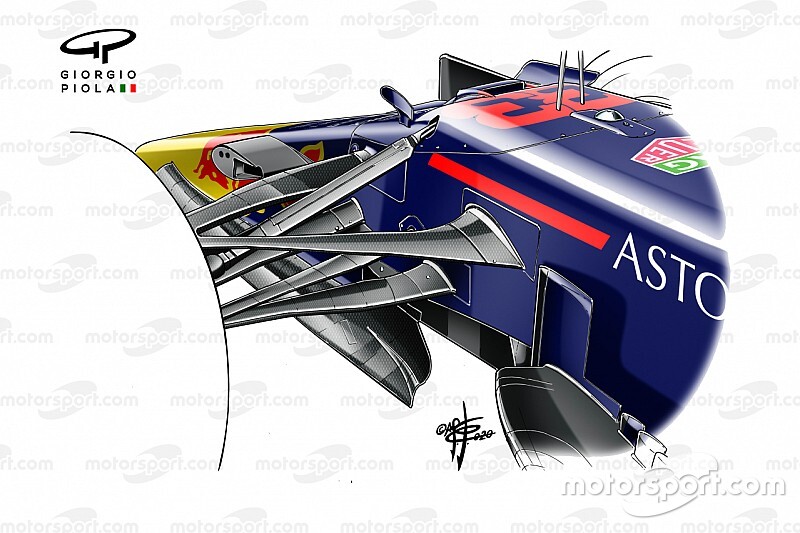 While most attention has been focused on the Mercedes DAS system, the German car manufacturer is not the only team to be trying something different during Formula 1 testing this week.

Its rival Red Bull has interestingly made a big change to its front suspension in a bid to try to close the deficit it has had to Mercedes in slow corners.

As Red Bull team principal Christian Horner said when asked by Motorsport.com: "The Mercedes were good in that low-speed performance last year and that's one area that we needed to improve.

"I think that we have made steps – and of course, this is just the start of a process, and the car will evolve from this point onwards."

While there are plenty of new ideas that are obvious on the Red Bull, the bold change to its suspension layout is much more hidden.

Last year's challenger, the RB15, featured a multi-link upper wishbone solution that many assumed had been cast aside when the RB16 was unveiled without it. 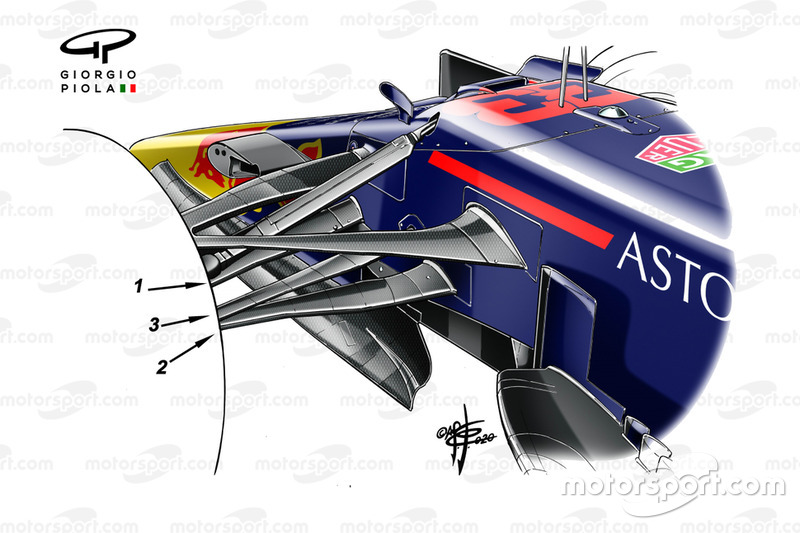 But a closer look at the RB16 in Barcelona has uncovered the fact that Red Bull has instead switched its concept around – using the multi-link of the lower wishbone instead (#1), with the rear leg mounted down lower (#2) than the front leg (#3) .

Furthermore, the front leg of the lower wishbone has a novelty of its own too. Not only is it mounted extremely high on the chassis, affording Red Bull the opportunity to slim the bottom of the bulkhead, it's also just a single element that passes from one side of the car to the other, through the bulkhead.

The designers have also paid attention to the forward leg of the upper wishbone, which now features the cricket bat styling on the fairing.

It's a feature that we've seen employed at the rear of the cars in the past and is a geometrical anomaly that's used for aerodynamic purposes. The benefit of the entire layout comes both in terms of weight-saving, but also in helping force airflow down towards the floor and bargeboards to improve the flow around the sidepods. 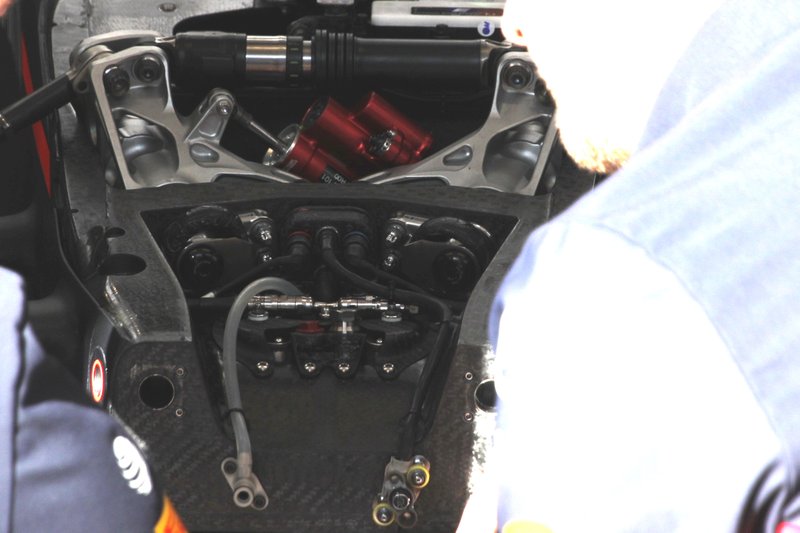 The RB16's bulkhead also differs from last season, not only terms of the suspensions packaging but also its shape, in order that the 'S' duct can benefit from the resultant overhaul 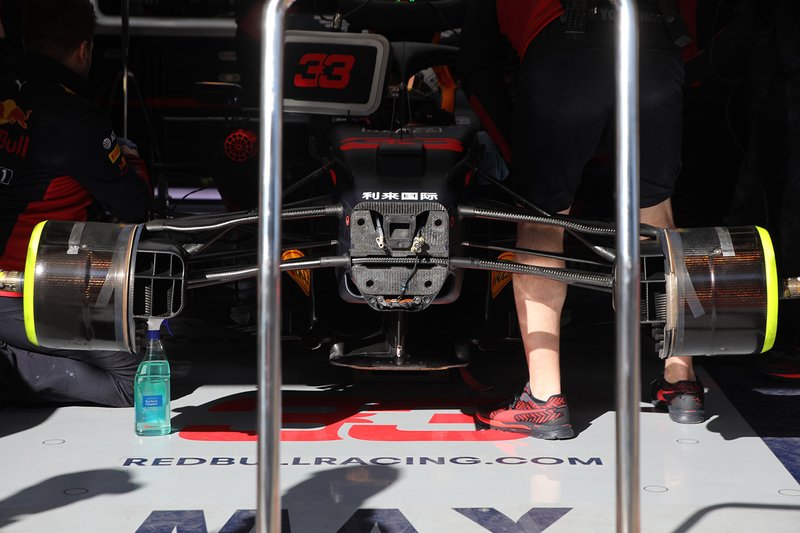 The RB16 with the vanity panel in place shows where the internal pipework for the ‘S’ duct would connect. 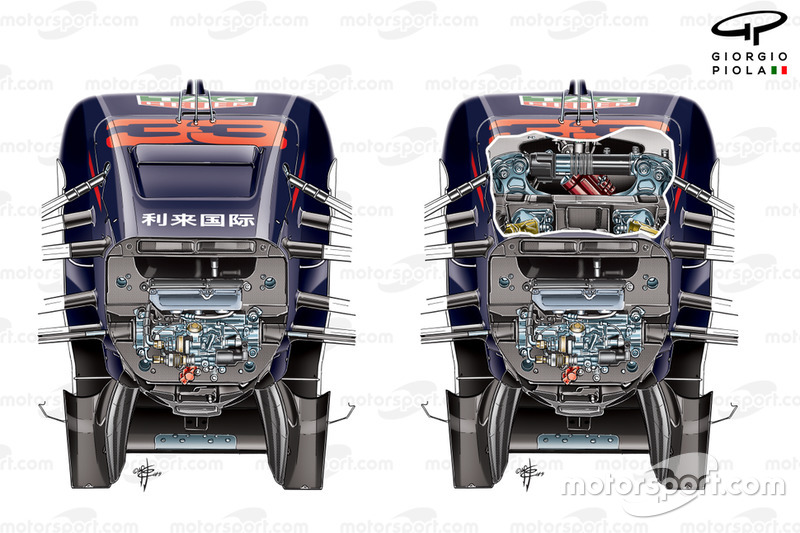 As a comparison here’s the bulkhead, inboard suspension layout and vanity panel on last year’s challenger, the RB15 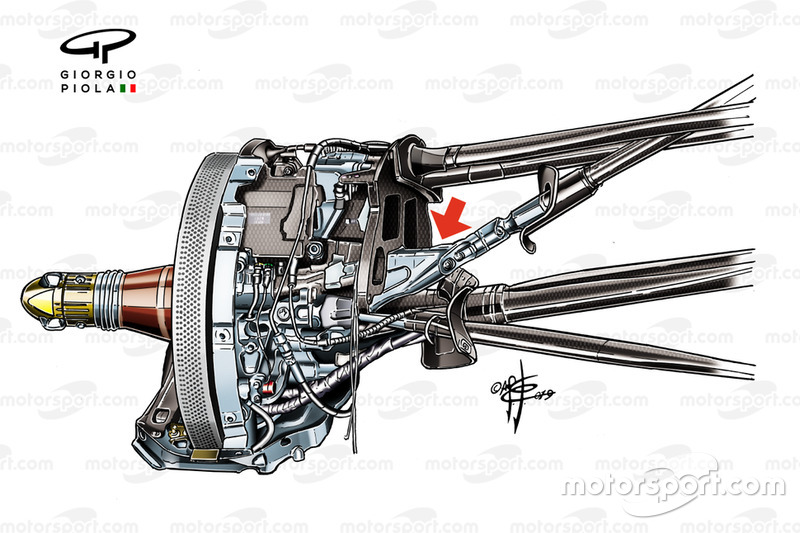 Red Bull have also continued to employ the pushrod-on-upright solution that they introduced last season, which undoubtedly adds another layer of complexity to their set-up work and further compounds the drivers learning curve in terms of the chassis’ behaviour.

Red Bull has also revamped its rear suspension design for 2020, opting for a much higher upright extension (#3), whilst also raising the lower wishbone (#1) to the centreline of the wheel too.

This puts the lower wishbone inline with the driveshaft fairing (#2) behind in order that they can work together to improve airflow in the region. The main gains of this will come from a clearer pathway for the airflow over the floor into the coke bottle region. 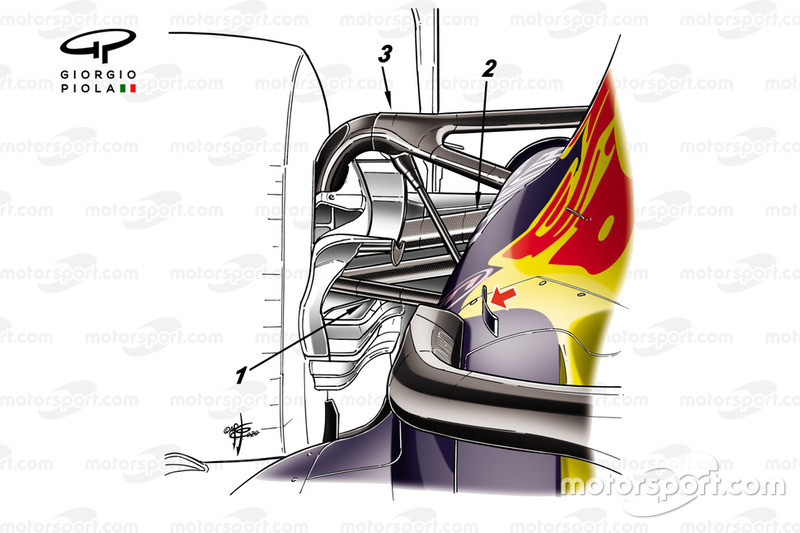 The team has also looked to maximise the performance of the winglets on the brake duct assembly, totally revamping their design, with a new clearer path available to the lower winglet stack.