George Russell set the pace in his first Mercedes appearance during opening practice for the Sakhir Grand Prix as drivers got a first taste of the Bahrain outer loop layout. 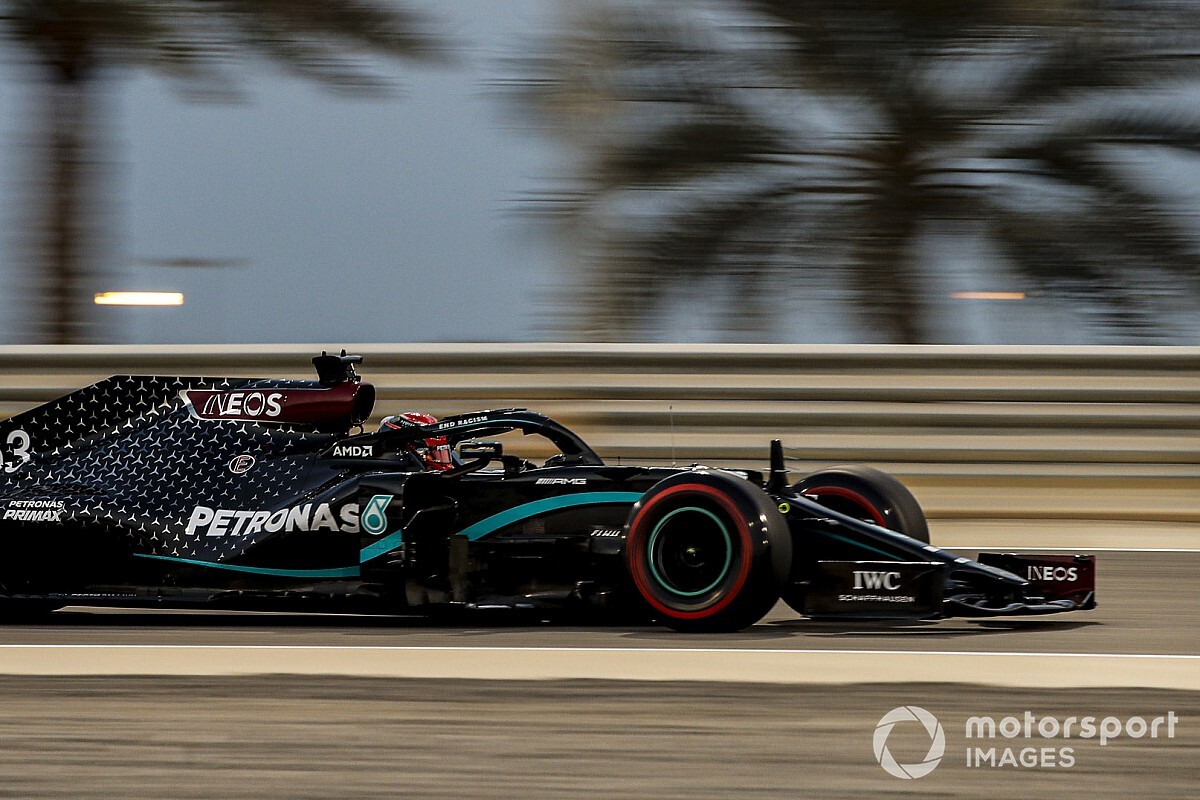 After being named as Lewis Hamilton's replacement for the race weekend following the seven-time world champion's positive test for COVID-19, Russell wasted little time in making an impression in the Mercedes W11 car.

Russell sat nine tenths of a second behind teammate Valtteri Bottas's fastest laptime following the early soft tyre runs in FP1, only to find plenty of time during the second runs.

Russell was able to find more than a second after pitting for a fresh set of soft tyres, allowing him to move up to top spot before Red Bull drivers Max Verstappen and Alexander Albon both took a turn at the head of the timesheets.

But a further improvement from Russell saw him set a time of 54.546s, taking top spot by almost two tenths of a second in the final classification.

The British driver was regularly in conversation with race engineer Pete Bonnington throughout the session, reporting some discomfort with his seat around his shoulders at one point.

Verstappen was able to finish the session in second place for Red Bull, lapping 0.176 seconds slower than Russell, while teammate Albon held on for third place in the sister RB16 car, albeit with a spin exiting Turn 2.

Bottas was left to settle for fourth place in the second Mercedes W11, finishing more than three tenths of a second off Russell's benchmark. Bottas suffered multiple lock-ups in the session that saw him go wide at Turn 1, prompting the Finn to say he was "not sure what's going on" over team radio.

AlphaTauri impressed to lead the midfield teams as Daniil Kvyat and Pierre Gasly finished fifth and sixth respectively. Gasly was forced to pit at one point due to a broken mirror, momentarily causing him to drive one-handed as he used the other to stop the bodywork from falling off.

Esteban Ocon took seventh for Renault ahead of Ferrari's Sebastian Vettel, with their respective teammates Daniel Ricciardo and Charles Leclerc completing the top 10.

Leclerc was one of a number of drivers to struggle with traffic on a push lap, coming across a slow-going Vettel at the exit of Turn 8, and also had a wide moment at Turn 5 earlier in the session, taking a trip through the gravel.

Racing Point drivers Lance Stroll and Sergio Perez finished 11th and 12th ahead of McLaren's Carlos Sainz, who lost some time midway through the session due to bodywork damage caused by the bumpy outer loop part of the track.

Pietro Fittipaldi made his bow as Romain Grosjean's stand-in at Haas, finishing the session 19th, but was forced to cut short his running due to a lock-up that flat-spotted his tyres, leaving him with just 24 laps in the books.

Fellow debutant Jack Aitken propped up the timesheets in 20th for Williams as he got up to speed as Russell's replacement.

Despite spinning briefly at Turn 2 early in the session, Aitken ended up lapping just four-tenths of a second shy of Latifi in the sister car.