After being excluded from qualifying for a technical infringement, Hamilton recovered from 20th on the grid to finish fifth for Mercedes in the 24-lap sprint race at Interlagos, pulling off a number of passes at the end of the start-finish straight.

The charge came following intrigue from Red Bull over Mercedes’ rear wing design that prompted technical chief Adrian Newey to make an enquiry with the FIA earlier in the race weekend.

Championship leader Max Verstappen said after the sprint race that he inspected and touched Hamilton’s rear wing following qualifying to see “how much the rear wing was flexing at that point”, resulting in a €50,000 fine for breaching parc ferme rules.

Red Bull F1 chief Horner said the team wasn’t surprised by Mercedes’ pace after Verstappen lost out to Valtteri Bottas for the sprint race win, calling Hamilton’s straight-line speed “mind-boggling”, but that it was “no great surprise”.

Hamilton was running with a new engine in Brazil, and will serve a five-place grid penalty on Sunday as a result, leaving him 10th for the start of the race.

“We saw it yesterday, that it's just phenomenal, especially with the size of rear wing that they have on the car,” Horner said on Sky Sports. “It’s something that we've got to try and focus on with our own performance.”

Horner added: “I think obviously, it's something that is enabling the car to do that kind of speeds.

“Something must happen, because physics wouldn't allow, the kind of horsepower delta that you would need to achieve that would be pretty significant.

“We're obviously trying to understand what it is and, and go from there.” 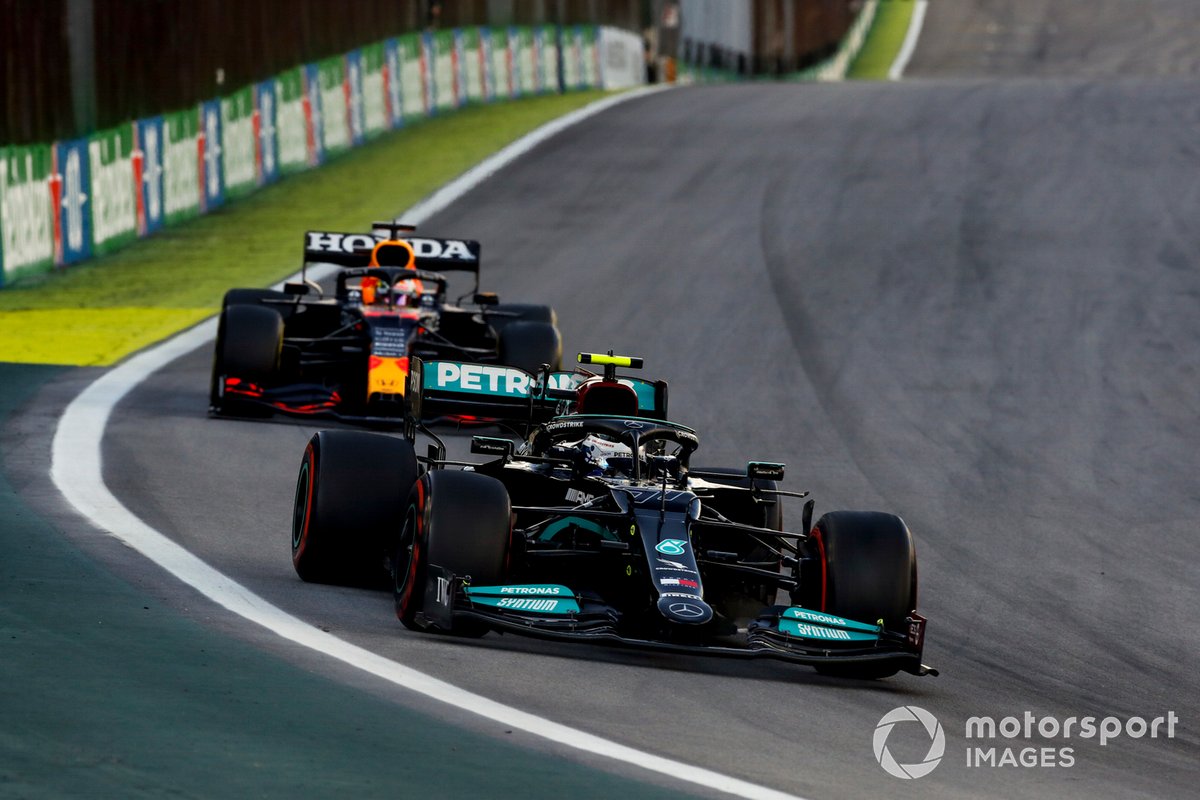 Asked about Newey’s meeting with the stewards and if Red Bull was putting some heat on the FIA, Horner said: “It's something that we've seen for a little while, but it's down to the FIA to police.

"The rules are quite concise, they're ever more constrictive. So it's something that we're going to keep an eye on because, particularly with Lewis today, you saw that was just a different league.

“I think he was 27 km/h faster than the Lando [Norris] when he passed him, which is another formula.

“But you know, it's a great drive from him. I think I said before the race that this track, you can really overtake at.”

Horner felt that Red Bull “very clearly know what it is” that was giving Mercedes the pace advantage, and it was “for the engineers to discuss” what next steps to take.

Red Bull was previously forced to revise its own rear wing design after the FIA clamped down on so-called ‘flexi-wings’ six months ago following concerns raised by Mercedes.

Horner said the back-and-forth between teams on technical matters was part of the F1 title battle.

“I mean, our rear wing, obviously a technical directive came out that changed the testing procedure on that and the wing was revised accordingly. You know, maybe we need another change to the tests.

“There's a bunch of clever engineers. That’s Formula 1, that's what the business is all about."