Valtteri Bottas believes Mercedes’ performance in Saturday’s Formula 1 sprint race proves it can still have “a great result” at Interlagos despite its setbacks this weekend.

Bottas scored his second sprint race win of the season on Saturday in Brazil, leading all 24 laps following a Turn 1 pass on pole-sitter Max Verstappen on the opening lap.

The result came as a boost to Mercedes after Lewis Hamilton was excluded from qualifying due to a technical infringement on his DRS, leaving him at the back of the grid.

But Hamilton was able to fight his way back through to fifth place in the sprint race, meaning he will start the Brazilian Grand Prix from 10th on the grid after serving a penalty for an engine change.

Bottas’s win ensured Verstappen’s championship lead over Hamilton only grew by two points instead of the maximum three for victory, and helped creep Mercedes’ advantage in the constructors’ championship up to two points.

“It was a good one, everything went as planned,” Bottas said of his sprint race performance.

“We opted to start with the soft tyre because we thought the best chance to get the lead was the race start, even with a bit of a risk that the end of the race could be tricky.

“But it worked perfectly. It wasn’t easy at the end. The tyres started to be pretty finished, but I just tried to avoid mistakes and tried to keep the focus.

“Today was a good day. And I am also pleased that Lewis could get up to fifth place, so that gives him plenty of opportunities for tomorrow.

“That means we can still, even with the issues of this weekend, have a great result on Sunday.” 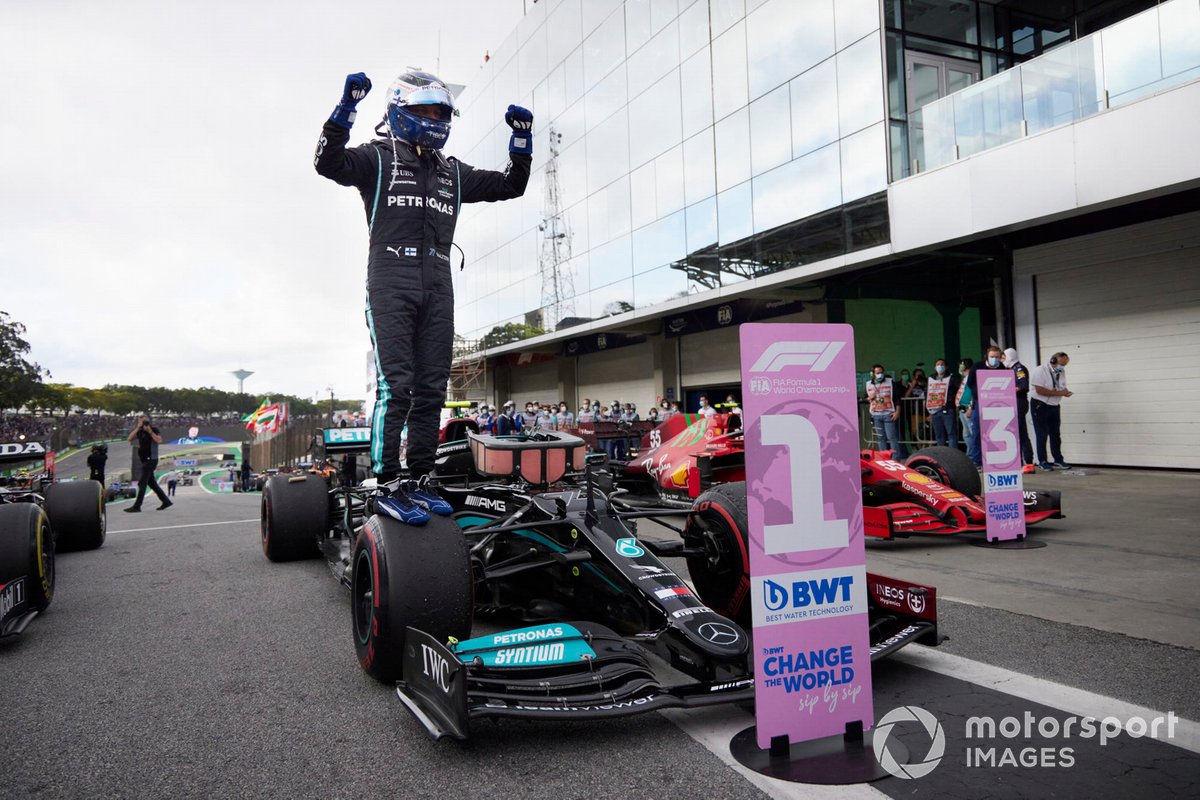 Bottas managed to open up a two-second lead in the opening stages of the sprint race, but was gradually reeled in by Verstappen, who was within one second and got DRS with 10 laps to go.

Bottas upped his pace towards the end and crossed the line 1.1 seconds clear of Verstappen, but noted after taking the chequered flag that his tyres did not have much life left.

“I was really fully focusing on trying to do the fastest stint I can, and that means management with the soft tyre,” Bottas said.

“Especially in the beginning, I was obviously trying to create a gap but not to kill the tyres immediately.

“[In] that middle part of that race really, [I] just tried to optimise the pace and that included quite a bit of management with the soft tyre, especially in certain parts of the track.

“Towards the end, I was trying to squeeze out every single bit I had left of the tyres.”