What made Ocon’s Verstappen move "unacceptable" 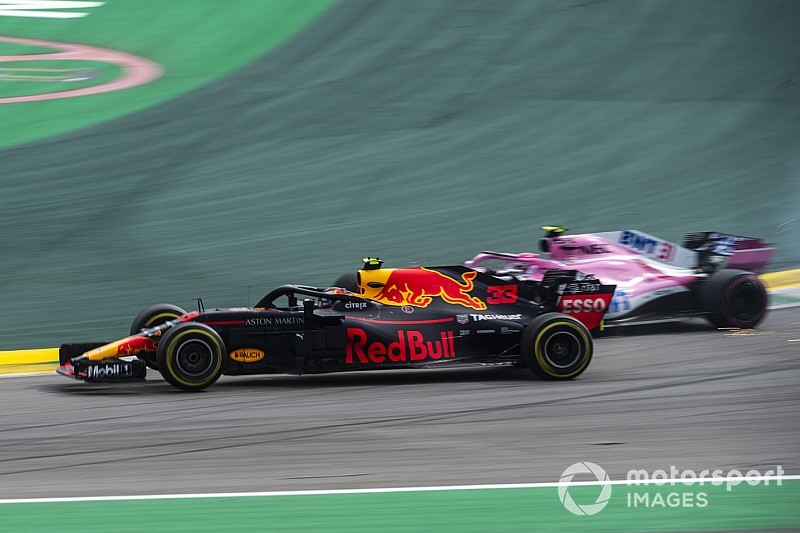 FIA Formula 1 race director Charlie Whiting says Esteban Ocon was not wrong to try to unlap himself in the Brazilian Grand Prix but fighting Max Verstappen was "wholly unacceptable".

Verstappen was taken out of the lead of the race after Ocon, recently out of the pits on fresh supersoft tyres, attacked him around the outside into Turn 1 and then tried to pass him on the inside of Turn 2.

Ocon was handed a 10-second stop-go penalty for causing a collision, but was backed after the race by his team, Mercedes boss Toto Wolff and Lewis Hamilton, who inherited the win as Verstappen dropped to second.

Whiting said Ocon was "absolutely allowed to unlap himself" but explained that it was the manner in which he attempted to pass Verstappen – who would have been vulnerable to DRS into Turn 4 had Ocon waited a little longer – that was the problem.

"It's happened many times in the past," said Whiting of whether lapped drivers can pass frontrunners. "But of course you expect it to be done safely.

"More to the point, it should be done cleanly and absolutely without fighting. You shouldn't be fighting to get past.

"If he's got the pace then normally one would expect Red Bull to say 'Ocon has got the pace, let him through' or that sort of thing.

"But it seemed he just went for it. It was just a bit unfortunate that he decided to fight for it, which was wholly unacceptable."

It was the first major incident between a backmarker and the race leader since the 2001 Brazilian GP, which ironically involved Verstappen's father Jos wiping out race leader Juan Pablo Montoya.

However, Whiting stressed: "I don't think it makes any difference it was the leader.

"It makes it worse in a lot of people's eyes but as far as the stewards are concerned, that doesn't matter."

Verstappen's role in the clash was criticised as some believe he should not have turned in to the apex of Turn 2 when he had gone side-by-side with Ocon into Turn 1.

Hamilton said immediately post-race he would have handled it differently to Verstappen and reiterated later that the Red Bull driver should have left more space given Ocon had "nothing to lose".

"I thought that it was fair game for him to try to unlap himself," said Hamilton when asked by Motorsport.com if he still maintained his position.

"You can never assume that the person's not up your inside, because he's a backmarker and he's going to back off.

"You've got to acknowledge the fact that he may be there – 'I'm going to leave extra space, because actually he's in a different race to me'."

Verstappen vs Ocon: History means more to F1 clash than meets the eye?